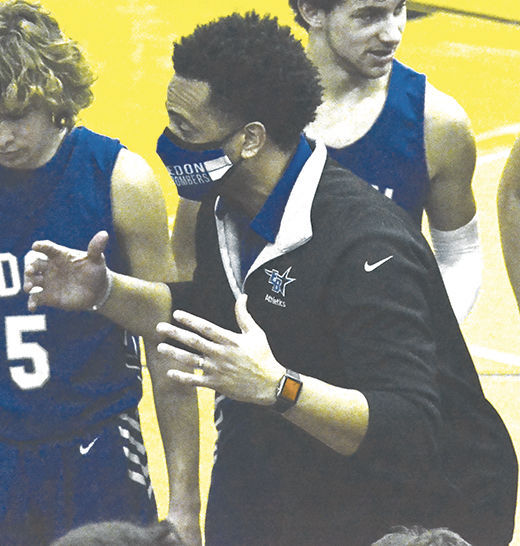 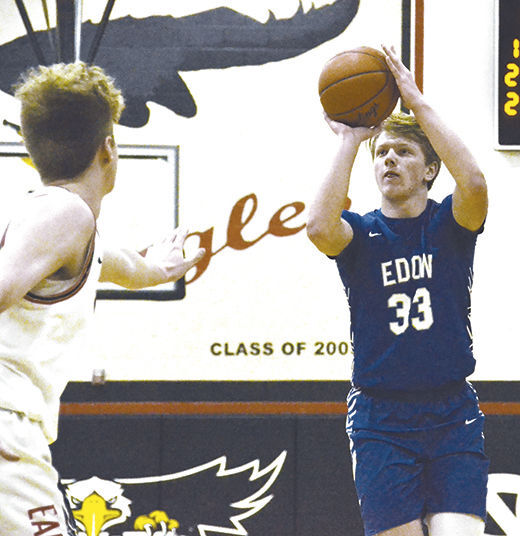 The Bombers (8-8, 8-3 Buckeye Border Conference) posted a season-high scoring output against the Eagles to get a 70-55 BBC win at North Central High School. Edon is still in the hunt to win a share of the BBC title after Pettisville lost to Montpelier 49-46 on Friday to fall to 9-2 in conference play (13-5 overall).

But Edon did it without first-year head coach Dale Curry, who resigned due to personal reasons on Wednesday afternoon, according to Edon athletic director L.J. Walker.

Curry went 7-8 overall in his one season at Edon. Curry declined to comment on the resignation when reached by The Bryan Times Friday night.

“But (he’s) a great guy, stand-up guy. He was here for the kids, worked hard for the kids and we appreciated everything he did for them.”

Walker, who coached the Bombers on Friday, will be the interim coach for the rest of the season.

“First and foremost, it’s for the boys. I have a relationship with them being able to be in school with them every single day, being that I was an assistant football coach, seeing them all the time, being able to be there for them,” Walker said. “There was no question in my mind, after talking with (Edon girls basketball) coach (Caela) Walker, my wife. I was like ‘Hey, this is what we’re thinking about doing,’ and she was like, ‘I think it’s a great idea. You should do that.’

“So getting her on board with everything and getting on board with administration, us working together, Caela, (Edon superintendent Anthony) Stevens and my assistant (athletic director) Brien (Moore), we were all like, ‘This is what we need to do.’

“The most important thing is finding someone that the kids trust. And I trust them, and they trust me. So it’s a mutual thing — and it shows. I say, ‘Go do your thing guys. We’re just going to sit back, adjust a little bit of things, but it’s on you guys and make it happen’ — and they did (tonight).”

Stevens said before the game that Curry’s resignation was an “unfortunate set of circumstances.”

“And with personnel, we don’t get too directly into it... but his comments to me were that he probably didn’t feel like he had the impact on the kids that he wanted to have, and he cared too much about them to have them have anything less than a positive experience. That was the conversation we had,” Stevens said. “I know it was incredibly difficult for him. Regrettable from our perspective as well, certainly wish that wouldn’t have happened. What we’ve done since then is turn our attention back to the kids and try to make sure they have the best experience they can to finish out the year.

“Just a great person. We really thank coach Curry for his time and his effort and all he gave to the program, because we all know he cared immensely about the kids.”

During the game, however, the Bombers were locked in.

They ended the first quarter with an 11-4 lead, but allowed North Central to score 22 second-quarter points compared to 13 of their own, letting the Eagles take a 26-24 lead into halftime.

“We talked about just attacking the gaps,” North Central coach Chris Fidler said. “It was frustrating early because we had spent all week in practice on attacking the gaps. And we knew they were going to run that 3-2 zone.

“We came out and played scared and timid early, and Edon was getting to the rim and scoring easy buckets. We dug ourselves an early hole. We come out in the second quarter and started doing what we’ve been working on in practice all week and started to make things happen.”

Edon, though, came out of halftime ready.

While the Bombers only took a 19-17 third-quarter advantage to make it 43-43 going into the fourth quarter, they scored a whopping 27 points to the Eagles’ 12 — totaling 46 second-half points — to get the BBC win and a step closer to a possible league title.

Edon needs to beat Fayette (8-9, 4-6) in its regular-season finale on Friday on its home floor and have Pettisville fall to Stryker (8-10, 6-4) on Friday at Stryker High School.

Walker also said he was impressed by how the Bombers “didn’t skip a beat” when he walked into his first practice on Thursday.

“They are teenagers, and they can look past some things and move forward,” Walker said. “It was like, ‘Ope, look who’s here.’ And I was like, ‘Hey guys, we’re going to keep this thing rolling as best we can.’

“And I’m so proud of these guys for the adversity they’re going through. This is their fourth coach in four years, and they’re making waves. All kudos to them.”