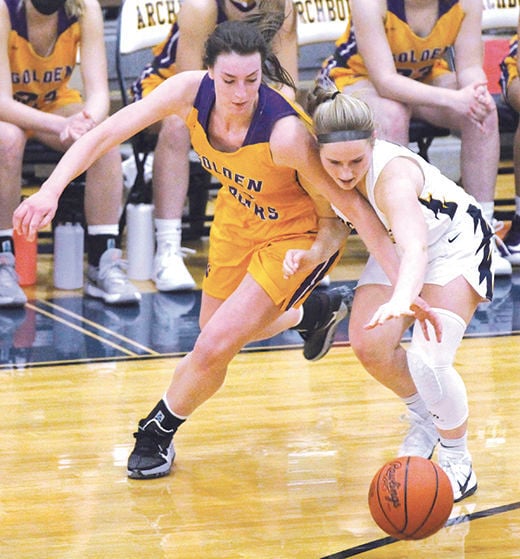 Bryan’s Shallyn Miley (left) tries to get the ball back after Archbold’s Addison Moyer pokes it away during Monday’s Northwest Ohio Athletic League girls basketball game at Archbold High School. 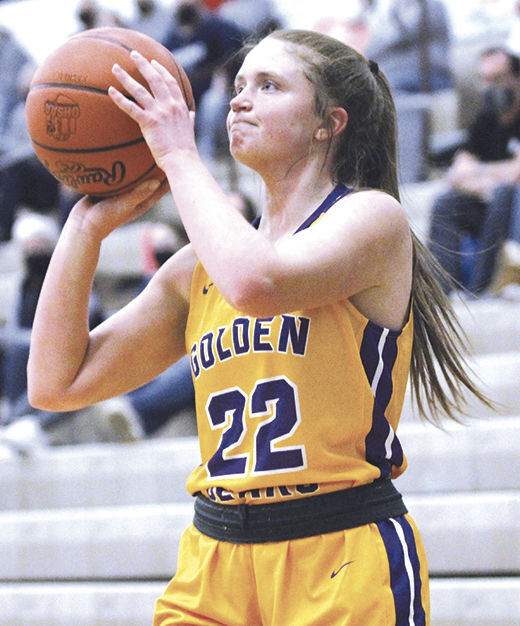 Bryan’s Shallyn Miley (left) tries to get the ball back after Archbold’s Addison Moyer pokes it away during Monday’s Northwest Ohio Athletic League girls basketball game at Archbold High School.

ARCHBOLD — Archbold started out against Bryan hot Monday, hitting 6-of-9 shots — including 3 of 4 from beyond the arc — and 2-of-3 free throws while forcing six turnovers to take a 17-9 lead after one quarter.

But, the Golden Bears put an end to the Bluestreaks’ run.

Bryan limited Archbold to 17 points — including only five combined points in the second and third quarters — and dropped 36 points in the remaining three quarters to get a 45-34 Northwest Ohio Athletic League girls basketball win and stay undefeated in conference play at Archbold High School.

“We’ve preached to these kids for five or six years that when you can’t get the ball to go into the basket and you’re turning it over, you got to keep playing defense. You can’t dwell on it,” Bryan coach Todd Grosjean said. “I think our kids are starting to figure that out. We’re playing pretty solid defense without one of our better defenders in Kloee Antigo, who kind of spot played tonight. She’s coming off an ankle (injury).

“I thought our kids did a really nice job defensively. I thought our free-throw shooting was pretty critical down the stretch (9 of 11 in fourth quarter). We had to make some free throws to keep the lead.

“And give credit to Archbold, they were aggressive, they gave us fits. We had way too many turnovers (19). We just need to clean some things up.”

Shallyn Miley dropped a double-double with game highs in points (14) and rebounds (12) — for the Golden Bears (16-3, 5-0 NWOAL), with eight points and six rebounds coming in the second quarter.

“Shallyn’s very capable,” Grosjean said. “We just talked in the locker room (that) we really haven’t collectively played well together. I mean, it’s been somebody here (and somebody) there, somebody takes a night off and somebody will step up on a given night.

“We need people to start — the rest of the way out — to show up and give us quality minutes and play collectively well as a group. And hopefully we’re going to do that at some point.”

“I thought defensively we played pretty well,” Archbold coach Brian Ziegler said. “Obviously, their height was a big factor in the game. We gave them too many offensive rebounds — gave them second and third chances. You can’t do that to a good team.

“I thought we came out and played well offensively, and then we hit a stretch where we (couldn’t) score a basket, and we just can’t do that and win a game against a good team. Obviously, their defense had something to do with it.

“Several games we’ve been right there. We just can’t get over the hump. It’s time to do that this time of the year.”