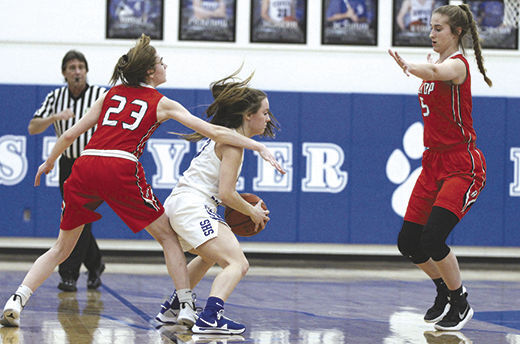 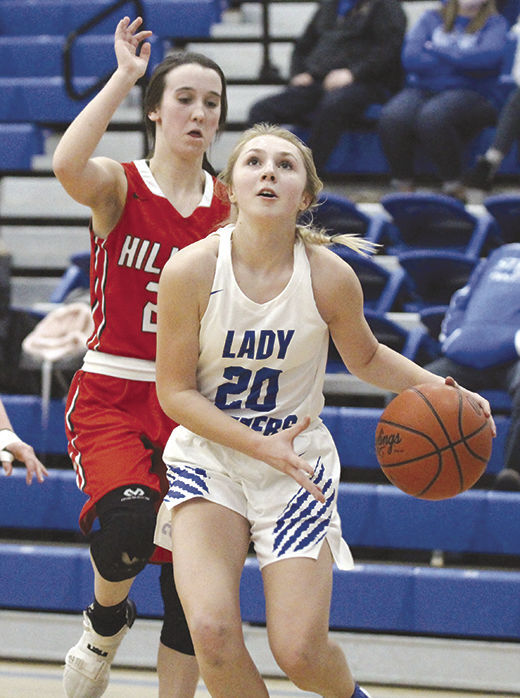 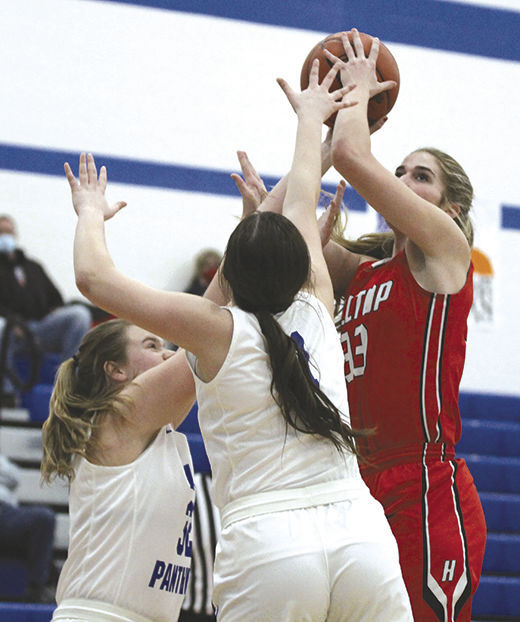 STRYKER — The ball has been bouncing Hilltop’s way this season. And the Cadets got a couple more friendly bounces on Thursday to escape with a win.

Hilltop junior Lana Baker drove to the baseline, put up a wild, contested and challenging left-handed shot from about 10 feet away that hit the rim, backboard, rim again and fell in with one second left to give the Cadets a 37-36 win over Stryker in a Buckeye Border Conference girls basketball game at Stryker High School.

Hilltop overcame a slow start with a big third quarter to improve to 12-6 overall and 9-2 in the BBC. The Cadets, who went 0-23 in the 2017-18 season and 1-22 during the 2018-19 campaign, matched their total number of victories from the previous four seasons combined.

“It’s very exciting coming from only winning one game my freshman year to only (six) my sophomore year,” Baker said. “This is a big turnaround for the whole Cadets basketball team.”

Hilltop sophomore Jayma Bailey scored 11 of her team-high 13 points in the first half and snatched five rebounds, while senior Kodi Brenner scored nine points (six in the second half) and had three boards. Leanna Baker scored all six of her points in the third quarter, grabbed five rebounds and made several huge defensive plays to get the Cadets back in the game, while Lana Baker added four points and three boards.

The Cadets turned eight-point deficits after the first quarter (14-6) and second quarter (24-16) into a 30-28 lead heading into the fourth. Hilltop forced 10 of Stryker’s 20 turnovers in the third quarter in using its defensive pressure and length to take the lead.

Leanna Baker (5-11 junior) found Bailey for a bucket off a turnover, then Baker converted a steal into a score to give Hilltop a 25-24 lead — its first of the game — with 4:42 left in the third quarter. Baker added a putback and Lana Baker’s score off a turnover extended the lead to 29-26.

After senior guard Kinsey Myers grabbed an offensive rebound, sophomore guard Sage Woolace found classmate Alexia Wickerham for a 3-pointer to pull the Panthers within 32-31 early in the fourth quarter. A pair of Woolace free throws put Stryker ahead 33-32.

“That was huge and we were wanting her to do that all night,” Stryker coach Conner Varner said. “She’s got a great outside shot and that was a huge shot for her to put that in.”

After the Panthers dribbled out the clock for nearly a minute, Woolace went to the free-throw line for a 1-and-1 opportunity with 14 seconds remaining. Woolace, who scored a game-high 15 points (5 of 7 from the line) and had five rebounds, missed the ensuing free throw.

Lana Baker took matters into her own hands in the final seconds.

“It first started when I got the rebound and I was looking for the guard to start something in the short 15 seconds,” Baker said, “and I got it and I was like ‘Oh man, this has to go in.’ And then I saw it hit the rim and I was like ‘Wow this is over,’ and then it hit backboard and I was like ‘oh my gosh, it could actually go in.’

“I can’t believe that happened. This was a really rough game and they technically had us in the bag from the beginning. We came out really rough.”

Kaitlyn Myers scored all nine of her points in the first half for Stryker, which shot a blistering 60 percent (9 of 15) and forced 11 of Hilltop’s 14 turnovers in the opening two quarters. Myers and Woolace both hit two 3-pointers, while Marissa Myers converted back-to-back scores in the paint off Kinsey Myers’ passes late in the first quarter to help the Panthers build an early lead.

“I think our defense kind of powered our offense there in that first half,” Varner said. “We played great defense, we were on help side, we were in our gaps where we needed to be and then offensively, we were moving the ball well around their zone.”

“It’s huge to get to 12 wins and to be 12-6 for the girls,” Grime said. “Hopefully, this is a nice little wake-up call before tournament.

“Obviously, Stryker’s improved so much and hopefully we can take a step and learn from this and come out ready to play. We struggled the last game initially coming out, took a big second half for us to take care of Edgerton (48-20 win on Saturday). It was a battle tonight.”