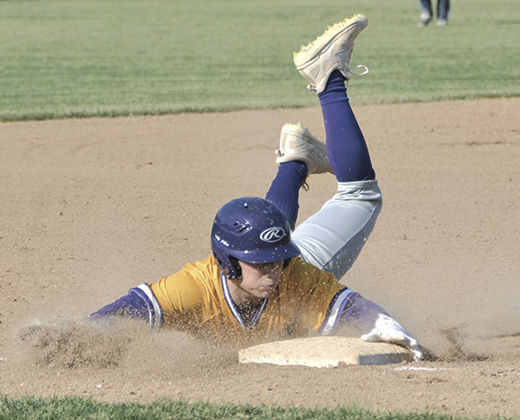 Bryan’s Quinn Brown slides into third base after a Napoleon overthrow to second base during Tuesday’s nonleague baseball game at Sumpter Field. 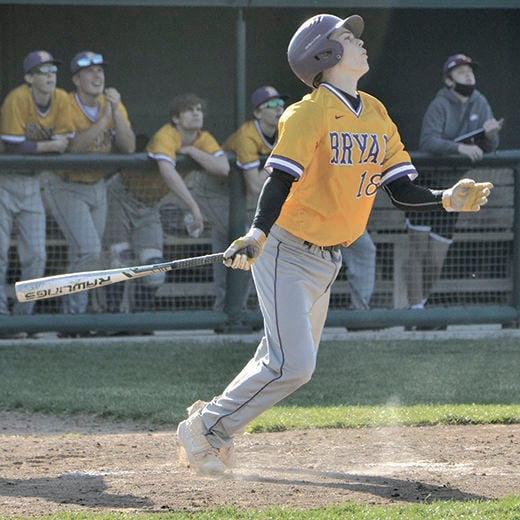 Bryan’s Taysen Deckrosh looks at the ball after making contact during Tuesday’s nonleague baseball game against Napoleon at Sumpter Field.

Bryan’s Quinn Brown slides into third base after a Napoleon overthrow to second base during Tuesday’s nonleague baseball game at Sumpter Field.

Bryan’s Taysen Deckrosh looks at the ball after making contact during Tuesday’s nonleague baseball game against Napoleon at Sumpter Field.

Napoleon’s bats couldn’t be stopped against Bryan, especially in the top of the fourth inning.

The Wildcats scored nine runs, smacked nine hits and drew two walks in 15 fourth-inning at-bats to help give themselves a 17-9 nonleague baseball win over the Golden Bears on Tuesday at Sumpter Field in Bryan.

“I was just really proud of us staying — we call it gap-to-gap — trying not to pull off the ball, hunt fastballs,” Napoleon coach Jason Holubik said. “We ran the bases well in that inning, and we were aggressive when we needed to be, we took some tough pitches and we just kept the train rolling.

“And that’s what you need to do to beat a good baseball team.”

That top of the fourth gave Napoleon (2-1) a 13-2 lead heading to into the bottom of the inning.

But Bryan (0-2) had a small rebuttal. The Golden Bears scored three runs — with Nolan Kidston, Titus Rohrer and Taysen Deckrosh crossing the plate — in the bottom of the frame to make it 13-5 heading into the fifth.

The Wildcats, however, responded with three runs of their own, extending their lead to 16-5 going into the bottom of the inning. The Golden Bears scored another three in the fifth to make it 16-8, but it was too little, too late.

“Going into the year, we knew we had an inexperienced team,” Bryan coach Jeff Inselmann said. “We’ve got to learn to handle adversity... We can’t give up nine runs.

“Somebody’s got to find to make a play, make a pitch and stop the bleeding. Because if we cut that down, we’re still in the game. We battled back, but we just can’t give up that many free bases.

“We didn’t make them work, and that’s where I’m kind of the most disappointed in.”

Kidston helped front Bryan by going 2 of 4 (two singles) and scoring three runs. Rohrer also had two singles (2 of 5), while Clayton Rupp (2 of 3) added a two-run double, a single, two walks and a run.

While Deckrosh only went 0 of 2, he did draw three walks with each one coming between the third and fifth innings and had two RBIs. Breven Deckrosh (1 of 4) contributed a double, sacrifice fly and a walk. He also started on the mound and took the loss.

The Golden Bears had 11 hits, one error and allowed 15 total walks.

“It was ugly,” Inselmann said. “Credit to Napoleon. They came out and they were aggressive, but I think we had 15 walks, hit two guys — that’s why we’ve been here for three hours.

“Just bad baseball. We’ve got to clean that up. That can’t happen. There’s some other mistakes we made along the way, and that’s not typical of a Bryan team.”

Carter Burken went 2 of 4, driving in five RBIs on two singles and drawing two walks for Napoleon. Blake Wolf went 3 of 6 with three singles and an RBI.

Seth Muncy went 1 of 2, hitting a double in the fourth to drive in two runs and drew walks in the second, fifth and sixth innings. Zack Rosebrook went 1 of 3, scoring three runs, drew two walks, getting hit by a pitch and hitting a single. Kaleb Woods (2 for 5) slapped two RBI singles.

Tanner Rubinstein (1 of 3, RBI single, two walks, hit by pitch) earned the win for the Wildcats after going 3 1/3 innings. He allowed four hits, five earned runs and struck out five.

Napoleon had 13 hits and committed three errors. And the nine allowed runs aren’t typical for the Wildcats, who next play Wauseon (0-2) at 5 p.m. Thursday in Napoleon.

“Our pitching in general needs to be better. That’s usually something that’s pretty good within our program,” Holubik said. “Give Bryan credit. We got out to a big lead, and that’s Bryan baseball. They’re not going to quit.

The Golden Bears will look to bounce back against Elida (2-0) at 5 p.m. Thursday at Sumpter Field.

“Pitchers got to throw strikes, because we can’t field walks — and that’s a combination,” Inselmann said. “If we’re going to walk guys, our defense is going to fall asleep and make mistakes.

“Right now our baseball IQ is lacking, and we as coaches need to do a better job. And our young guys need to grow up in a hurry.”