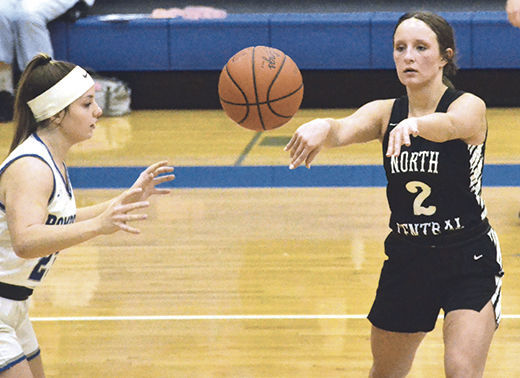 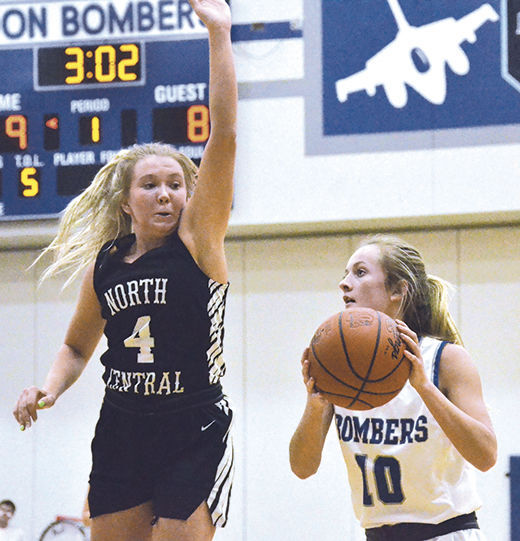 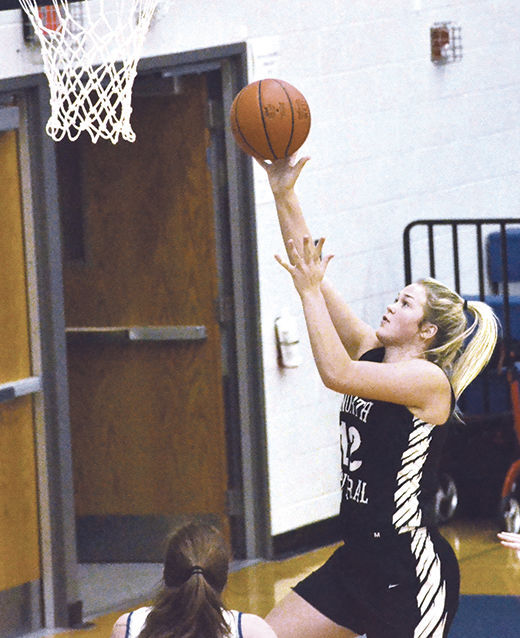 North Central’s Kendal Bonney converts a layup during the second half of Friday’s girls basketball game against Edon at Edon High School.

North Central’s Kendal Bonney converts a layup during the second half of Friday’s girls basketball game against Edon at Edon High School.

EDON — A dominating second half offensively and defensively for North Central’s girls basketball team turned a halftime deficit into a win.

Despite losing the rebounding battle, the Eagles outscored the Bombers 31-10 in the final 16 minutes to earn a 47-34 season-opening nonconference victory on Friday at Edon High School.

“We were switching back and forth between man-to-man and zone (defense), and I think maybe that helped a little bit too.”

Down eight points at halftime and 10 with 6:15 left in the third quarter via a Carlie Kiess layup, North Central turned it around. A Madison Brown 3-pointer and Lauren Balser 3 within 37 seconds of each other slimmed Edon’s lead to 26-22 with 4:44 left in the frame.

A Makinzy King layup with 2:43 left got the Eagles within two points and it stayed that way until the fourth quarter, when Kendal Bonney tied the game at 26-all with a layup 14 seconds into the frame.

A Kiess layup gave the Bombers a two-point edge, but that was the last time Edon led.

In just under a two-minute span, Brown converted two three-point plays and nailed an additional 3-of-4 free throws (5-of-6 total) to give North Central a 35-30 lead with 4:18 left. A King layup 26 seconds later made it 37-30 and forced an Edon timeout.

“I think the confidence in making my shots is what made (them) go in,” said Brown, who dropped a game-high 21 points and six steals.

“The biggest thing was we were having a hard time staying on the perimeter of the zone. And I told them they needed to start getting into the middle of the zone,” Hutchison said. “(Brown) did a good job of getting it in there. And once she got it in there, she’s a very good creator and was able to create herself some opportunities.”

The Eagles kept the pressure on after the timeout. They finished the game on a 10-3 run — with Balser fronting the run with seven points (layup, 5-of-6 free throws) — to secure the win.

The Bombers had the advantage early on.

After a 13-13 tie entering the second quarter, Edon locked down North Central to a Bonney layup and Balser free throw and scored 11 points of its own. Kiess had a layup and was 1 of 2 from the free-throw line, Allison Kaylor scored two layups and Emma Hickman hit a pair of mid-range jumpers to make up the Bombers’ second quarter.

“I think they were being disciplined,” Edon coach Caela Walker said. “We were working the ball inside-out, we had some girls knock down some shots and just getting in good position and get high-percentage shots, and they were able to convert.”

“It’s good to win the boards, but then we have to convert,” Walker said. “When it’s the offensive end we have to have stickbacks, when it’s defense we got to kick it up and run our secondary break and get layups.

“And we did not do that tonight.”

“We’ve got to be a better second-half team... In the second half we were flat and we weren’t really executing or running much on the offensive end,” Walker said. “Then on defense, errors on knowing where Madi Brown was at and they have some size, so that’s a little bit of a challenge for us.

“But you just got to continue to battle and get better.”