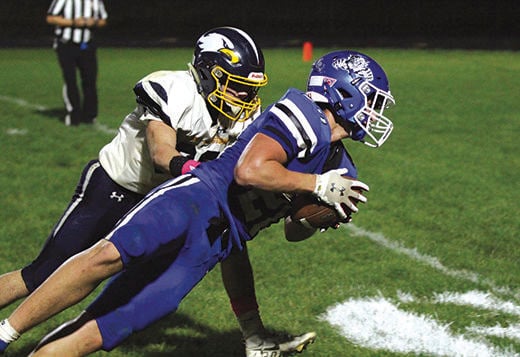 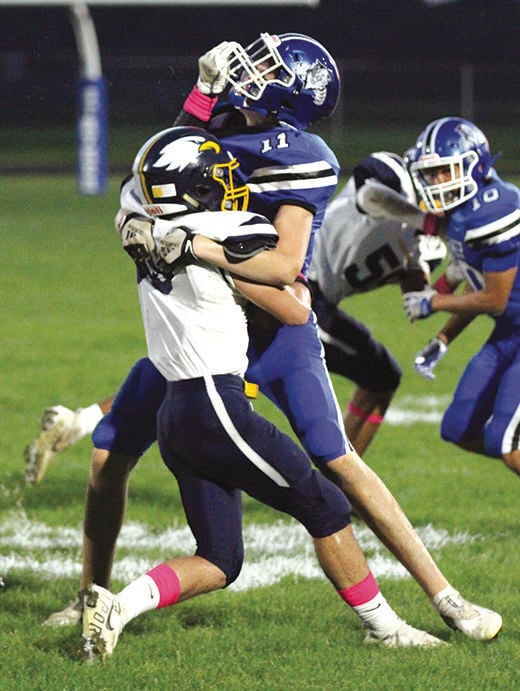 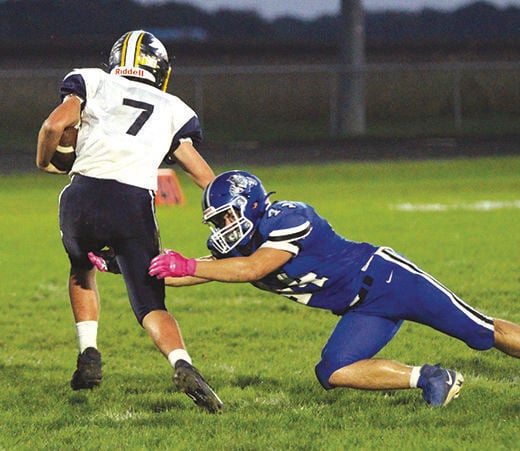 STRYKER — A couple turnovers early in the second quarter, and a couple big stops defensively by Toledo Christian, proved costly for Stryker’s football team on Saturday.

Toledo Christian turned a fumble and interception into quick points, quarterback Charlie Duck IV ran for a 95-yard touchdown after a defensive stand and the Eagles knocked off the Panthers 42-14 in a Northern 8 Football Conference game at Stryker Athletic Complex.

“We’ve been having problems with penalties at key moments and then key turnovers too, so it’s one of those two things we’ve been trying to get rid of and both of them have been biting us in the rear there,” Stryker coach Kent Holsopple said. “It’s something we’re battling and we’re trying to fix, but we’re just having inopportune penalties and turnovers at key moments and they hurt us.”

Stryker dropped its fourth straight game to fall to 1-4, while Toledo Christian notched its fifth straight win to move to 5-1.

The Eagles used a 28-8 advantage in the second quarter to take a 36-8 halftime lead. Toledo Christian had a 338-91 advantage in total yards in the opening half, with several big plays extending its lead.

Duck IV found Karter Koester for a 4-yard touchdown, and the ensuing 2-point conversion run from Jacob Michalski extended Toledo Christian’s lead to 16-0 with 11:54 left in the second quarter.

Two plays later, Stryker quarterback Jacob Cadwell dropped back to pass and appeared to throw the ball forward under pressure, but it was ruled as a lost fumble that Toledo Christian recovered. On the next possession, Duck IV found Koester for a 43-yard touchdown to extend the lead to 22-0.

Cadwell’s pass was picked off by Michalski on the first play of Stryker’s next possession, and a 15-yard face mask penalty against Stryker gave Toledo Christian first-and-10 at the Panthers 14.

The Panthers, though, responded with a big kickoff return from Matthew Froelich, setting up first-and-10 from the Toledo Christian 26. Stryker drove down to the 8, but was stopped on fourth down.

Duck IV scampered 95 yards on the next play as Toledo Christian built a 36-0 lead with 5:10 left.

“I think early on offense kind of was sputtering a little bit,” Toledo Christian coach Andrew Skeels said. “They weren’t seeing the holes yet, but then when we can lean on our defense to create turnovers and hold them within, then that broke open a 95-yard touchdown, I think that was huge. Defense really did step up.”

“Charlie’s come a long way,” Skeels said. “He followed (2021 Toledo Christian graduate) Trevor Wensink and he saw what he did, and he’s starting to understand the quarterback responsibility of when to throw, when to tuck it. He sees the holes when he’s running, and he’s seeing the passing lanes a lot better as well.”

Stryker finished strong to end the first half. The Panthers capped off a six-play, 53-yard drive with a 25-yard Cadwell touchdown pass to Levi Barnum. Cadwell flipped the ball to Froelich for the 2-point conversion to cut Toledo Christian’s lead to 36-8 with 1:46 left.

The Eagles drove down the field in the final two minutes and had first-and-10 from the Stryker 13, but the Panthers made several solid plays to hold them out of the end zone in the final seconds.

“I was proud of the kids. They stepped up, we were telling them we had to dig in, we had to keep them out and we did, and I thought that was really big,” Holsopple said. “We used that in the locker room to help us for the second half too because when we’re going through tough times like this, we’re looking for bright spots and signs of better plays ahead, so I was proud of the kids for digging in and stopping them there at the end of the second quarter.”

Toledo Christian opened the second half with a 16-play, 53-yard scoring drive. Kalon Butler scored from 1 yard out to extend the lead to 42-8 with 4:33 left in the third quarter.

Late in the fourth quarter, Cadwell found Barnum over the middle for an 88-yard touchdown to make it 42-14 Toledo Christian with 2:48 left.

Barnum finished with three catches for 117 yards and two touchdowns, and had 25 rushing yards on seven carries. Cadwell was 8-of-12 passing for 174 yards, two touchdowns and one interception, while Mateo Villanueva had two catches for 33 yards for Stryker.

Stryker will look to bounce back at 7 p.m. Friday when it heads to Britton, Michigan to face Britton Deerfield.