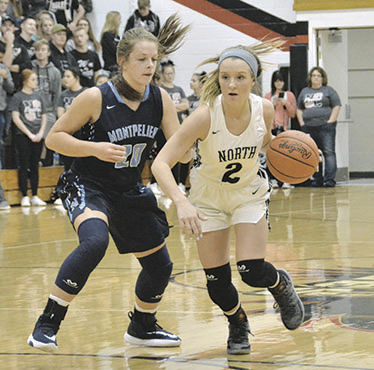 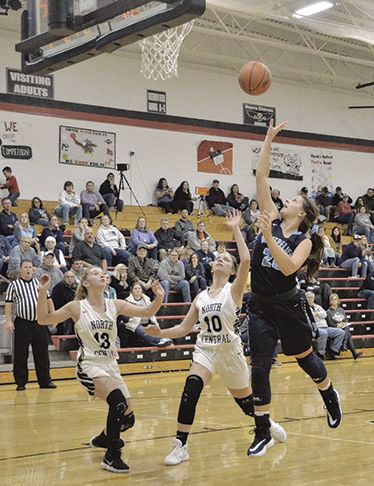 PIONEER — With 16.9 seconds left and the game tied at 47 in the North Central girls basketball team’s matchup with Montpelier on Tuesday night, Locomotives sophomore Chelsea McCord ripped down a rebound and was fouled. McCord went to the line and made the front end of a one-and-one, and Montpelier had a one-point lead with 15 seconds left.

Instead of drawing up his best, foolproof play, North Central coach Greg Waidelich decided to leave the game in the hands of his players.

“I told the girls, ‘I’m not a good enough coach to draw up a game-winning play every single time,’” Waidelich said. “’You guys have to bail me out, and you guys have to make plays.’”

His team did make a play, as North Central senior Kailey Siebeneck dribbled down the right side of the court, when she was rushed by two Montpelier defenders. She looked up and heaved the ball downcourt to a wide open Kendal Bonney, who took a few dribbles and made the game-winning layup with 10.6 seconds left to give the Eagles a hard-fought 49-48 win.

“We had two girls make a great play,” Waidelich said. “It was just them. I was just standing there, watching and enjoying it.”

Montpelier (2-1, 2-1 Buckeye Border Conference) found itself on the high side after a solid offensive first quarter. Sophomore Ariel Page had eight points in the first quarter alone, and a layup at the horn gave the Locomotives a 17-14 advantage after the opening frame.

“Page was just a monster to start the game,” Waidelich said. “We couldn’t stop her. We started to do a slightly better job of pressuring the ball and limiting her deep catches (in the second).”

The game flipped on its head in the second quarter, as North Central (1-4, 1-3) ratcheted up the defensive intensity. The Eagles held Montpelier to just six points in the second quarter. Five points from Kyleigh Westfall and four from Madison Brown gave the Eagles a 30-23 advantage heading into halftime.

For Montpelier coach Mike Bumb, the biggest difference between the Locos’ first quarter and their second was their intensity.

“It was just energy,” Bumb said. “I didn’t think we played with great energy in that first half. Obviously, we’re very aware of (Madison) Brown. They hit a few big shots, and we got down, and that’s really it.”

North Central extended its lead to 38-27 with 1:24 left after a coast-to-coast layup by Brown, but that was about the time the momentum shifted in Montpelier’s favor. The Locomotives went on a 5-0 run in the last 33.8 seconds of the third quarter, capped off by a buzzer-beating 3-pointer from Ali Repp, and the Eagles’ lead was slashed to 38-33 heading into the fourth.

“They were speeding the game up to a very fast pace, and we were not able to stay within ourselves at all,” Waidelich said. “It’s always easier to break a press at the beginning of a game than it is at the end, when you feel that pressure. They got a huge momentum swing from that.”

Montpelier finished that comeback when McCord completed an and-1 with 5:37 left in the quarter to give the Locomotives a 42-40 lead. Lauren Balser responded with a 3-pointer of her own for the Eagles, and the two teams were tied at 45 with 3:45 left, setting the stage for Siebeneck and Bonney’s heroics at the end.

Waidelich said after the game he was happy that his team was able to put in a complete performance after three straight losses to start the season.

“It was by far the best game we’ve played against probably one of the better teams we’ve played,” Waidelich said. “(Montpelier is) a really good team. You can tell Bumb has them going. To come out against that level of competition and to play our game was really exciting. It was fun to see them get to experience how good they can be.”