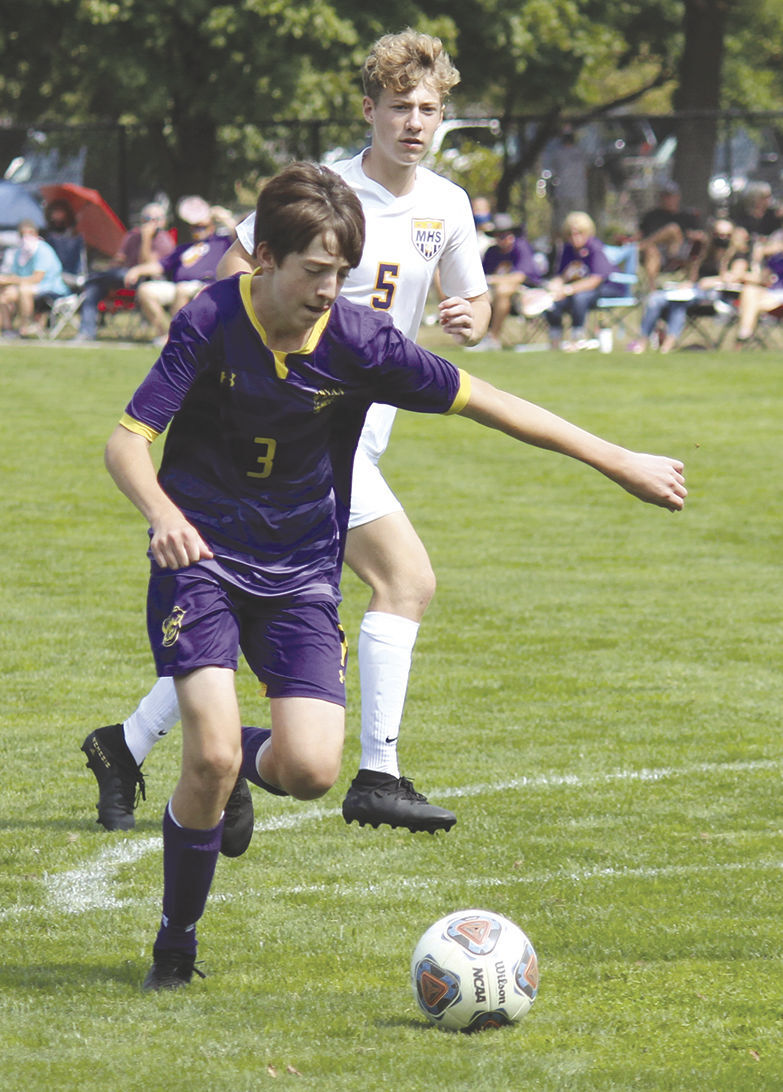 Bryan’s Nathan Hess (3) gets ready to fire a shot after getting past Maumee’s Jackson Kain during Saturday’s boys soccer match at Recreation Park. 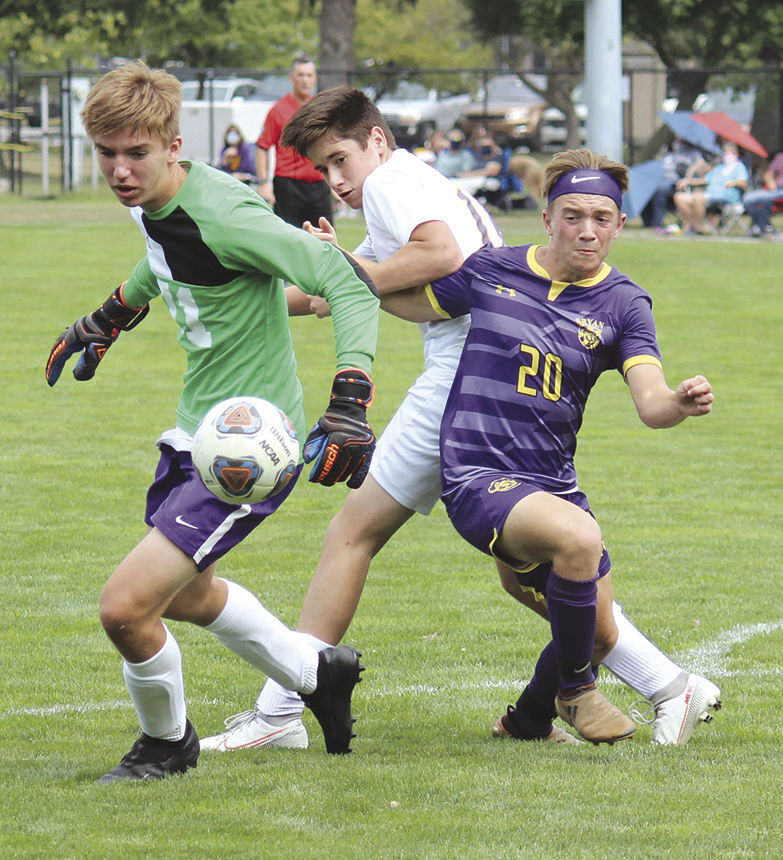 Bryan’s Nathan Hess (3) gets ready to fire a shot after getting past Maumee’s Jackson Kain during Saturday’s boys soccer match at Recreation Park.

Nathan Hess had quite a three-day stretch for Bryan athletics.

Two days after his score lifted the Golden Bears’ boys golf team to a key league win over Archbold, Hess connected on two goals in helping Bryan’s boys soccer team post its third straight win with a 3-0 nonleague victory over Maumee on Saturday.

“He takes in everything he has for practice,” Bryan coach Luke Collins said. “In the week, he missed two practices to go to golf. It’s more than OK for someone like Hess to do that, to go and compete at golf and then come to soccer and step right in, not really lose a touch or anything like that and come out and perform. He’s a great kid to coach.”

Bryan used a strong performance on both sides of the field to improve to 3-2 overall. The Golden Bears also recorded their first shutout of the season as senior goalkeeper Isaac Lamore tallied 11 saves and made numerous other plays in the box to keep the Panthers (1-4) off the board.

Efficiency, along with field awareness, was key for the Golden Bears.

Bryan had just four shots on goal in the first half, but the Golden Bears converted two of them to grab a 2-0 lead at the break.

Bryan was on the attack again 20 minutes later as Anthony Tomaszewski went up the left side of the field. He fired a pass to the middle for teammate Dylan Koenig, but the ball went by Koenig and Maumee’s Jackson Kain.

Hess, though, was in the right place at the right time. He collected the pass and fired a shot from the right side past Lewis for a goal and a 2-0 Bryan lead with 10:31 left.

Hess, whose 44 at White Pines Golf Course beat Archbold’s Kenny Williams by one stroke to decide the fifth-player tiebreaker in Thursday’s golf match, added another goal with 14:17 left. He ran down the right side to get the ball as Maumee goalkeeper Isaac Tolbert initially raced up to get the ball, but backtracked. Hess chipped the ball over Tolbert’s head and into the back of the net for a 3-0 Golden Bears lead.

“His awareness and his soccer IQ is high and he knows what to do, where to be and to be in the right positions and that’s what I think has helped him out,” Collins said of Hess. “Both of those goals were scored by his positional play and being available on the right hand side of the pitch for that cross.”

Hess missed Bryan’s golf match Saturday morning when the Golden Bears competed in the Walt Behrman Invitational at Napoleon Municipal Golf Course. But he said scoring two goals to help the soccer team win “definitely made up for it.”

Both teams registered 11 shots on goal. Lewis had two saves in goal for Maumee in the first half, while Tolbert collected six saves in the second half.

Saturday’s game ended a long layoff for the Golden Bears, who last played on Sept. 3 (2-1 win over Delta). Collins said the extra practice time has been beneficial to work on cleaning up certain aspects of the game.

“That’s what we work on is being dynamic on both ends of the pitch,” Collins said. “As far as up front, the attack, we’ve got our wingers involved, we’ve got our forwards involved and they played really nice balls through the channels, broke down the defense and positionally, we were in the right spot.

“... Today was a really good feeling because we’ve worked so hard in practice these last couple of weeks and it’s been just over a week since we’ve had a game. So we’ve had a lot of time to just work on these simple things and the boys really stepped up, really improved today.”

Bryan will look for its fourth straight win on Thursday when the Golden Bears travel to Continental for a 5 p.m. match.