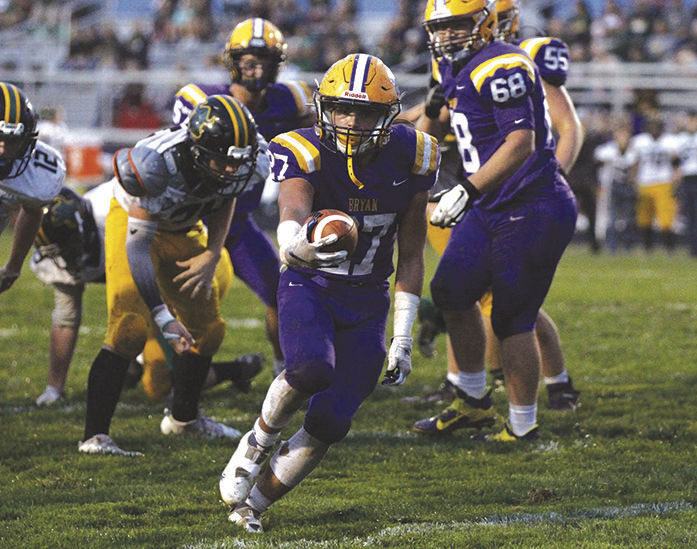 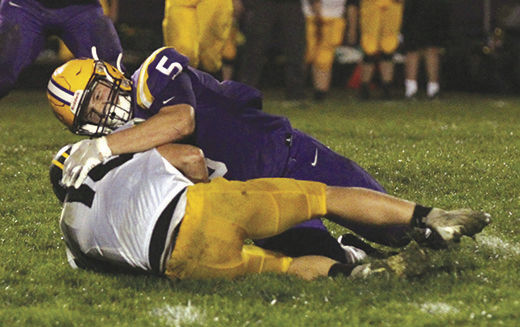 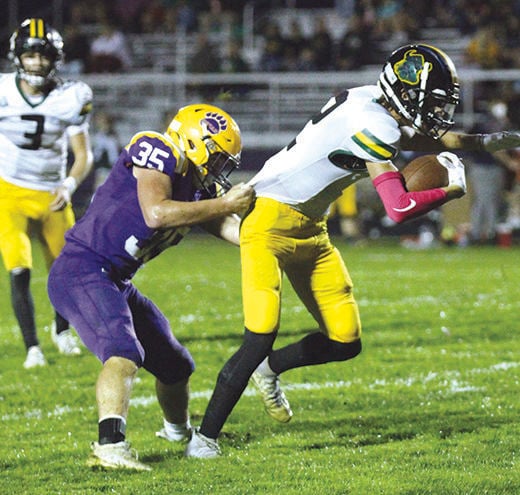 A big sequence to end the first half and a strong start to the second gave Bryan the momentum to post a bounce-back win on Friday.

The Golden Bears’ defense made several big plays to force an Evergreen punt in the final minute, and the Golden Bears found the end zone with 12 seconds left to take a 24-14 lead. Bryan forced a three-and-out to start the second half and scored on the next possession as the Golden Bears picked up a 45-14 Northwest Ohio Athletic League victory over the Vikings at Golden Bear Stadium.

“I think that was huge,” said Bryan junior quarterback Dylan Dominique, who finished with four total touchdowns. “We knew they got the ball coming out of the half, so I think as an offense, we needed to go down and continue to score like we had.

“We got a field goal and we got two touchdowns there in the first half, but I think we really needed to go down and show them that we’re going to take the life right out of you. I think that last touchdown was kind of a nail in the coffin. Defense comes out in second half and gets a huge stop right out of the gate, and we go down and score and I think that kind of led to this team rolling at the end.”

Bryan ended its two-game skid to improve to 4-4 overall and 2-3 in the NWOAL. Evergreen dropped its sixth straight game to fall to 2-6 overall and 0-6 in the conference.

Evergreen appeared to have momentum after quarterback Payton Boucher found Landen Vance for a 68-yard touchdown to cut Bryan’s lead to 17-14 with 5:48 left in the second quarter. Bryan responded with a long drive, but missed a field goal to give the Vikings the ball with 2:12 left.

After an Evergreen penalty backed the Vikings up to the Bryan 11, the Golden Bears’ Nick Herold sacked Boucher for a 5-yard loss; Conor Brown batted down Boucher’s pass and Lane Hurlbert made a nice tackle on Boucher for a 3-yard loss.

Bryan forced Evergreen to punt from its own 2 and took over at the Vikings 32 with 33.7 seconds left. Dominique hit Sam Herold for a 23-yard gain, and two plays later, Dominique found Trenton Wolfe for a 9-yard touchdown with 12.6 seconds remaining to give Bryan a 10-point lead.

Bryan went right to work in the second half. Senior running back Korbin Shepherd capped off a seven-play, 74-yard drive with a 1-yard touchdown run to give Bryan a 31-14 lead with 7:22 left.

Dominique had a 1-yard touchdown run on fourth-and-goal to extend Bryan’s lead to 38-14 late in the third quarter.

On fourth-and-goal from the Evergreen 11 early in the fourth quarter, Dominique dropped a perfect pass to Herold in the back right corner of the end zone. Herold hauled in a nice catch and kept his feet in bounds as Bryan took a 45-14 lead.

Dominique, filling in for injured quarterback Jase Kepler, finished with 169 yards and three touchdowns on 11-of-17 passing in addition to his rushing score. He also hit Herold for a 45-yard touchdown to give Bryan a 17-7 lead with 6:55 left in the second quarter.

“I think my preparation this week in practice was definitely a lot different,” Dominique said. “Not knowing I was going to play against Liberty Center last week obviously. I’m feeling for Jase right now, I was in that same situation he was in last year, breaking my finger.

“But I think this week really was not as tough as last week was. We played a really good Liberty Center team last week and I think the game this week was just slower for me. Everything slowed down, trusted my reads that coach gave me during the week.

“I think really what made it this week was we got back to the running game. We ran the ball up front really well and that opened up for me to make plays and get the ball to my guys outside.”

Shepherd, after rushing for just 30 yards in last week’s 55-14 loss to Liberty Center, rumbled for 174 yards and two touchdowns on 37 carries. He scored on a 3-yard touchdown run to cap off a 12-play, 69-yard opening drive.

“Second half, we got behind our pads and ran, and that’s what we wanted to do,” Bryan coach Grant Redhead said. “I was very pleased. I wasn’t pleased going into half, but I was pleased after the second half.”

Herold hauled in six catches for 130 yards and two touchdowns. He also had an interception defensively, which led to a Quinn Brown 27-yard field goal to give Bryan a 10-0 lead late in the first quarter.

Bryan finished with 358 yards of offense and held Evergreen to just 158. Boucher was 11-of-23 passing for 124 yards, two touchdowns and an interception.

Boucher found a wide-open Jesse Spradlin for a 15-yard touchdown early in the second quarter to cut Bryan’s lead to 10-7.

Bryan will return to action at 7 p.m. at home against Swanton before traveling to Wauseon on Oct. 22.