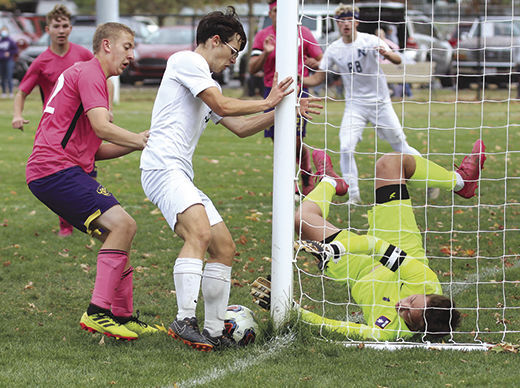 Bryan goalkeeper Isaac Lamore, bottom right, saves the ball from crossing the line on a shot from Napoleon’s Devin Boettner, top right, during Saturday’s boys soccer match at Recreation Park. Lamore pushed the ball past Napoleon’s Lathen Shank, middle, and Bryan’s Devon Winzeler, left, cleared it to keep Napoleon off the board. 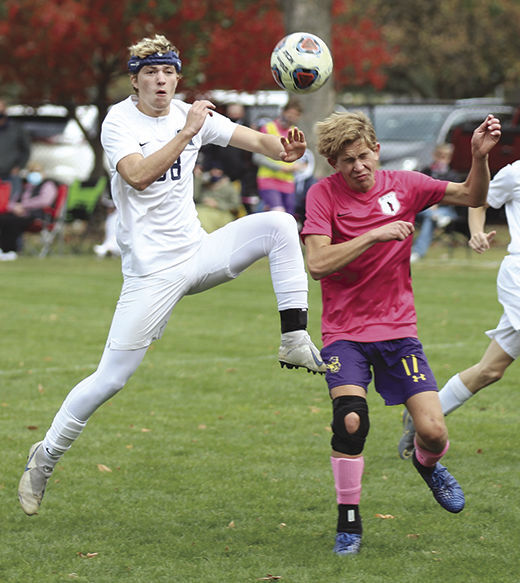 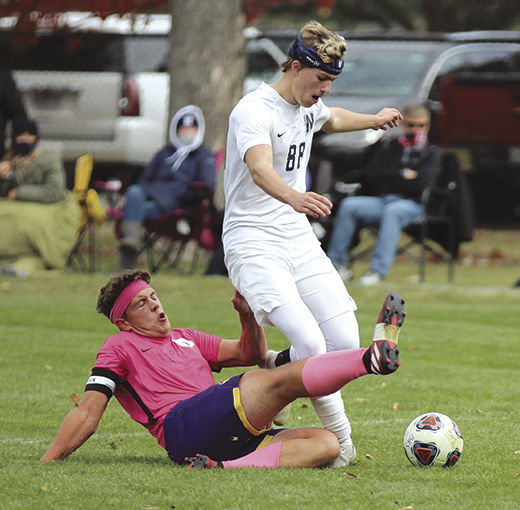 Bryan's Keith Huard, left, slides to try to get the ball away from Napoleon's Devin Boettner during Saturday's boys soccer match at Recreation Park.

Bryan goalkeeper Isaac Lamore, bottom right, saves the ball from crossing the line on a shot from Napoleon’s Devin Boettner, top right, during Saturday’s boys soccer match at Recreation Park. Lamore pushed the ball past Napoleon’s Lathen Shank, middle, and Bryan’s Devon Winzeler, left, cleared it to keep Napoleon off the board.

Bryan's Keith Huard, left, slides to try to get the ball away from Napoleon's Devin Boettner during Saturday's boys soccer match at Recreation Park.

Isaac Lamore’s game-changing save highlighted a strong finish to the regular season for Bryan’s boys soccer team on Saturday.

Lamore chased down a shot from Napoleon’s Devin Boettner that was inches away from crossing the line, and the Golden Bears took advantage of its offensive opportunities in knocking off the Wildcats 4-0 in a nonconference match at Recreation Park.

“Game changer right there,” Bryan coach Luke Collins said of Lamore’s save. “(The defense has) been huge, huge impact on the team all season.

“A lot of them are relatively young and inexperienced and this is their first real full season. Isaac’s always been a standout since I’ve known him, he’s just been phenomenal. The defense, they’re so disciplined and they stick to a position and they play so hard.”

Bryan capped off a solid week in improving to 5-9-2 overall. The Golden Bears tied Northwest Ohio Athletic League champion Wauseon and a red-hot Pettisville team earlier in the week.

The Wildcats had a 9-7 advantage in shots on goal, but couldn’t find the back of the net as Lamore (seven saves) and Elijah Schlade (two) helped post Bryan’s second shutout of the season.

Lamore’s diving save came at a key point in the first half.

With 12 minutes remaining and Bryan leading 2-0, Boettner got a slow-rolling shot off from the left side against two Bryan defenders. The ball curved hard from right to left around Lamore and headed toward the right corner of the net.

Lamore raced back to get to the ball, dove and pushed the ball out just before it crossed the line. The ball went past Napoleon’s Lathen Shank just enough on the back side for Bryan’s Devon Winzeler to clear it out of the box.

“It was really helpful because we weren’t up by a lot, so we didn’t have a huge differential. So if they got one, they could have momentum and start scoring some more,” Lamore said. “There was just some miscommunication between my defender and myself, so he just got it right past me but I was able to just get back and save it.”

“Goals give you so much energy,” Napoleon coach Chris DelFavero said. “It doesn’t just get the guy who scored energy; the entire team gets it. Without getting that first goal in, we just seemed to be pressing and we just didn’t have it today.”

The Golden Bears used efficient passing and speed to tally its four scores. Nathan Hess tapped a pass in front of the net to Zach Seaman, who tucked it into the right side of the net past Napoleon goalkeeper Austin Hopkins for a 1-0 lead with 25:20 left in the first half.

Six minutes later, Bryan’s Quinn Brown fired a pass from the middle to the left side, where Anthony Tomaszewski chased it down and fired a shot into the right side of the net for a 2-0 Golden Bears’ advantage with 19:30 left.

Hess added another assist as he found Owen Potvin along the left side. Potvin rifled a shot that deflected off a diving Napoleon goalkeeper Michael Gallagher and sneaked in the net to give Bryan a 3-0 lead with 30:16 remaining.

Brown tallied Bryan’s fourth goal as he got the ball on a breakaway, bolted down the middle of the field and tapped the ball past Gallagher with 22:13 left.

“I felt like we were actually effective on them today,” Collins said of his team’s offensive chances. “We were OK with letting Napoleon possess the ball a little bit and we dropped in, but we knew we had speed on the wings and speed up front.

“With Dylan Koenig holding the ball up and Quinn Brown being able to get in behind them, we had a lot of options and I think we kind of pride ourselves on our counter attack and our quick transition into attack. Today, we were actually able to get the ball behind the defense and actually put the ball in the goal this time. When you do that and you start to get confident, the boys start to play and they want the ball.”

Napoleon possessed the ball throughout most of the match, but the Wildcats couldn’t find that first goal.

“In the first half, we had some moments that we looked like we were going to put some things together. Just missed on a couple, but overall, I thought our effort was not where it needed to be today,” DelFavero said. “That’s disappointing when your effort level doesn’t match your skill level.

“I can live with skill level not matching effort level, but I can’t live with the other way. That was disappointing today that we just didn’t put the effort out that we needed to.”

Gallagher, who left the match for just over 20 minutes after getting injured in the opening minutes on a play in front of the net, had one save. Hopkins tallied two saves.

Both teams will begin tournament play this week in the OHSAA Division II, Northwest 2 District bracket. Bryan, the No. 7 seed, hosts No. 9 Maumee at 5 p.m. today at Recreation Park, while No. 4-seed Napoleon hosts No. 11 Sandusky at 5 p.m. Thursday.