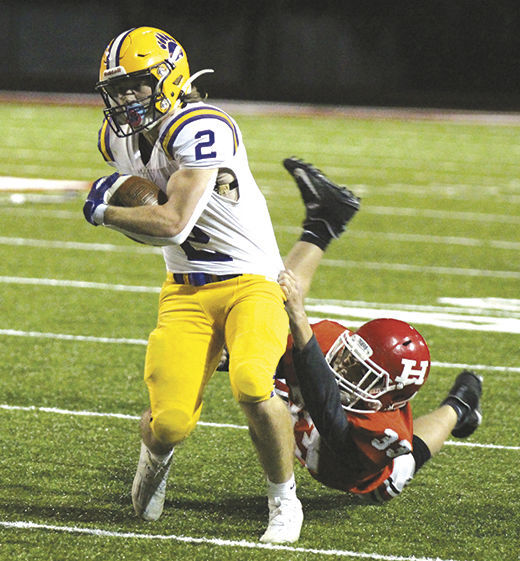 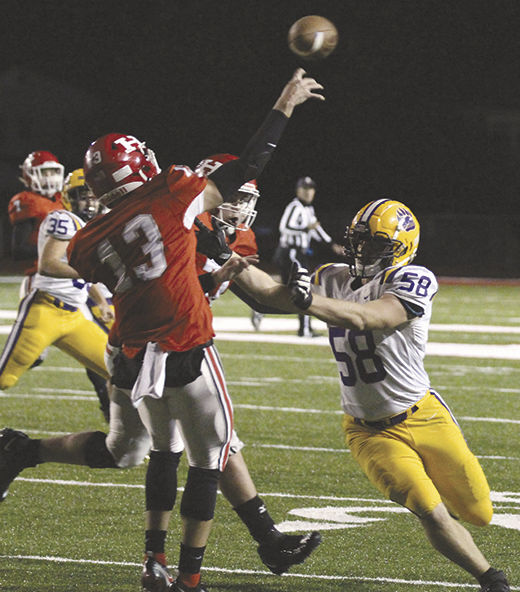 HURON — Huron was hungry to get back on the field after an opening-round bye a week ago, and Bryan fed the Tigers some costly mistakes in a lopsided first half.

Huron forced three turnovers, five three-and-outs and limited Bryan to just one first down in taking a 37-0 lead at the break and posting a 44-22 victory over the Golden Bears in a Division IV, Region 14 second-round playoff football game Saturday at Huron Memorial Stadium.

“They’re a good football team. That’s why they were the No. 3 seed,” Bryan coach Grant Redhead said. “We sure didn’t help ourselves with all the turnovers.

“That’s one of the things we said we can’t do is turn the ball over. They had 12 positive turnovers coming into the game and I think we gave them three more in the first half. All of them were in our own territory; we can’t do that, especially against a good football team.”

The third-seeded and unbeaten Tigers (7-0) advanced to take on No. 11 seed and defending state champion Clyde at 7 p.m. Saturday. Clyde knocked off No. 6 seed Wauseon 28-15 in a second-round game Saturday.

Bryan, the No. 14 seed, had its three-game winning streak snapped in dropping to 5-3 overall.

Huron racked up 266 yards in the first half and used a balanced offense and sound defense to take control.

Holliday rushed for 55 of his 68 yards in the first half, including a 29-yard touchdown run up the middle on third-and-1 on Huron’s first possession.

“Our offense, at times it will explode for big plays and we had some of those in the first half,” Huron coach Sam Hohler said, “and I think you see in the second half, we sputter once in a while and turn the ball over. But if we can clean those up and just be more consistent I think we could really get things on a roll.”

Bryan’s Caleb Kepler forced a fumble from Huron backup quarterback Luke Lagando on the Tigers’ first possession of the second half. The Golden Bears turned it into points as Kepler capped off the three-play, 23-yard drive with a 2-yard touchdown run. Quarterback Ethan Wasson found running back Korbin Shepherd for the 2-point conversion to cut Huron’s lead to 37-8 with 9:18 left in the third quarter.

However, Huron responded as Lamb returned the ensuing kickoff 79 yards for a touchdown and a 44-8 lead.

Kepler added a 3-yard touchdown run to open the fourth quarter and pull Bryan within 44-14. After Bryan recovered a Huron fumble, Mikey Wolff capped off a five-play, 67-yard drive with a 4-yard touchdown run. Kepler ran in the 2-point conversion to trim the Tigers’ lead to 44-22 with 7:38 left.

“That’s the thing that I was proud of. Yeah, Huron subbed but even when they put their starters back in our kids kept battling, we got a couple stops. We improved, we didn’t make the mistakes we did in the first half, even though the personnel wasn’t always the same.”

Wasson was 12 of 24 passing for 117 yards and three interceptions for Bryan. The Golden Bears had five fumbles and lost two.

“They were definitely sound in the secondary,” Redhead said of the Tigers. “We weren’t getting open and when we were, we didn’t have time to deliver it.

“Their defense was pretty stout, one of the better ones, them and Archbold, the best two we’ve faced this year.”

Kepler tallied six catches for 66 yards to go with his two rushing touchdowns. Titus Rohrer added two receptions for 46 yards, while Shepherd had 25 yards on 12 carries before leaving the game in the third quarter with a leg injury.

Kaden Staley hauled in three catches for 84 yards, while Lamb had two for 46 for Huron. The Tigers had four turnovers as backup quarterback Dylan Hohler threw an interception in the second half.

“We had a great start; that momentum got us going early on and really set the tone for us,” Sam Hohler said. “... They were really champing at the bit (to play after last week’s bye). Everything we could do by the end of the week this week, when they’re practicing against one another it was almost like back in the summertime when they were whaling on each other.

“It was all we could do to keep them from pushing and shoving one another, just waiting for our opponent. It was definitely strange, but it worked out for us.”

Bryan’s next scheduled game is at 7 p.m. Friday at home against Wauseon (5-2). The two schools scheduled the game earlier in the season in case both had openings in Week 9.