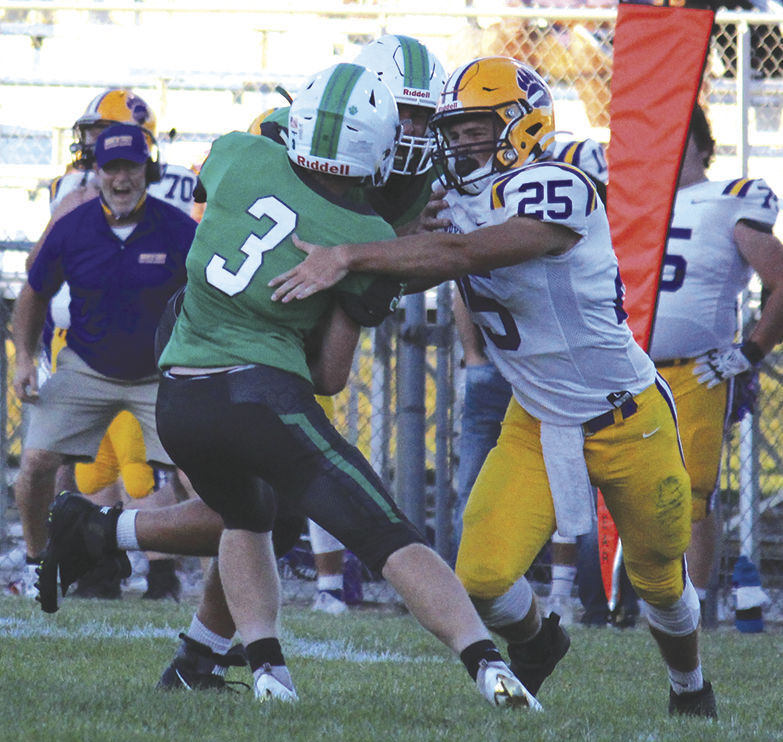 Bryan’s Breven Deckrosh (25) reaches to try to tackle Delta’s D.J. Davis (3) during Friday’s game at Delta. The Golden Bears will be back in action Friday as they host Patrick Henry in a Northwest Ohio Athletic League contest. 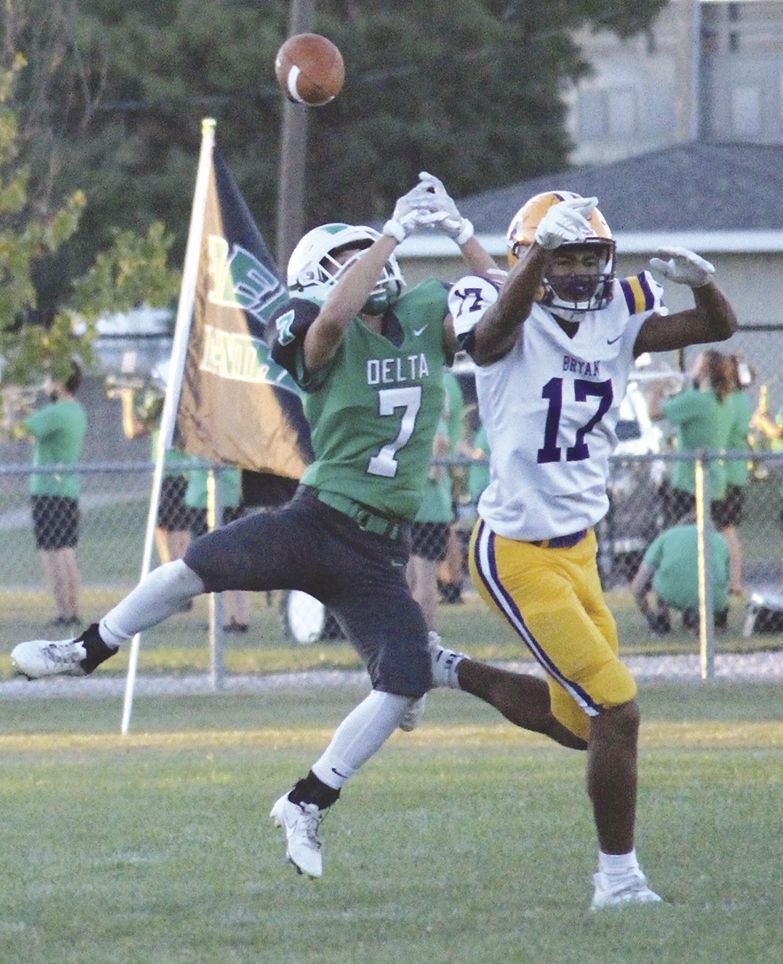 Bryan’s Breven Deckrosh (25) reaches to try to tackle Delta’s D.J. Davis (3) during Friday’s game at Delta. The Golden Bears will be back in action Friday as they host Patrick Henry in a Northwest Ohio Athletic League contest.

Despite losing four all-Ohioans and an elite senior class from last year’s Division VII state semifinal team, Patrick Henry is off to a 2-0 start in 2020.

“You always expect them to drop off and (are) like ‘Oh great, they finally got rid of those guys,’ and then you see them on film and they’re doing their same thing,” Bryan coach Grant Redhead said of the Patriots. “We played the team that was picked to win the league (Archbold) and we played a Delta team that’s going to beat some people this year, they’re a lot better. So we got tested a little bit early.

“We’ll see when we go up against them. I think we’re a little bit better than what they’ve faced so far, so it should be good but we’re going to have to prepare. They do a great job coaching their kids and their kids play hard.”

The Patriots, under veteran coach Bill Inselmann, have been solid to start this season.

Sophomore quarterback Gavin Jackson (5-foot-9, 160 pounds) has thrown for 258 yards and three touchdowns, while also rushing for 108 yards and a score. Senior running back Corbin Johnson (5-9, 175) has 132 yards and two touchdowns on 29 carries, and also has a kickoff return for a touchdown.

Clayton Feehan (5-10, 170), who along with Johnson is one of five multi-year letterwinners for the Patriots, has hauled in team highs of 99 yards and two touchdowns on seven receptions.

“Patrick Henry’s a good team,” Bryan junior Jaylin Damron said. “They’ve won both of their games because they’re a good team, of course, and we just can’t do those bad plays.

“We cannot make those mental mistakes or they’re going to use that to their advantage and go down the field and score. So we’ve just got to be mentally prepared and mentally ready and just play hard.”

Damron was crucial defensively in helping the Golden Bears hold off Delta. The 5-11, 177-pound junior had three interceptions, including a pick-six in the fourth quarter to extend Bryan’s lead to 14-3 with seven minutes left.

Bryan held Delta to 216 yards of total offense. The Golden Bears bottled up Delta’s Josh Tresnan-Reighard, who had just 58 rushing yards on 23 carries after racking up 169 yards in a Week 1 win over Evergreen.

“On defense, we’ve got to hold them and really play stingy defense to help our offense out and get our offense some good field position,” Redhead said.

Offensively, line play and limiting turnovers will be key for the Golden Bears. Redhead said he has been working with the line non-stop before and during practice to make sure they are ready to go.

“We grow up a little bit each week. I’ve got first-time starters, they’ve had some penalties in the past two weeks and it’s going to happen,” Redhead said. “The biggest thing is we can’t just lose all our focus when we’re trying to execute and get a drive.

“The O-line’s starting to mature a little bit, so hopefully we can get these things hashed out and be ready to roll.”

Bryan senior quarterback Ethan Wasson has thrown for 154 yards, two touchdowns and two interceptions on 13 of 28 passing. Senior wideout Caleb Kepler has three catches for 90 yards, including an 84-yard touchdown in the second quarter against Delta.

Junior running back Korbin Shepherd has tallied 129 yards (eighth in the NWOAL) on 29 carries.

Patrick Henry has won four of the last five matchups, including a 35-20 win in Week 7 last season that dropped Bryan to 2-5 overall. The Golden Bears won their final three games to finish the season.

Kickoff is scheduled for 7 p.m. at Golden Bear Stadium. Friday will also be Parents Night for seniors in football, band and cheerleading.