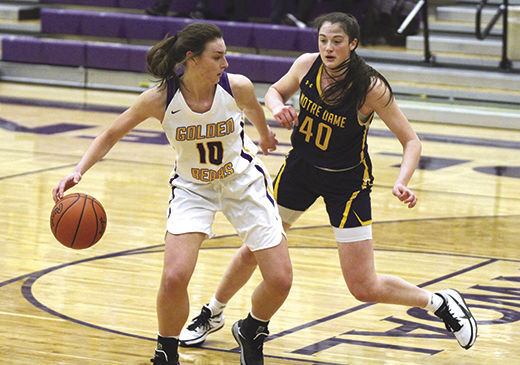 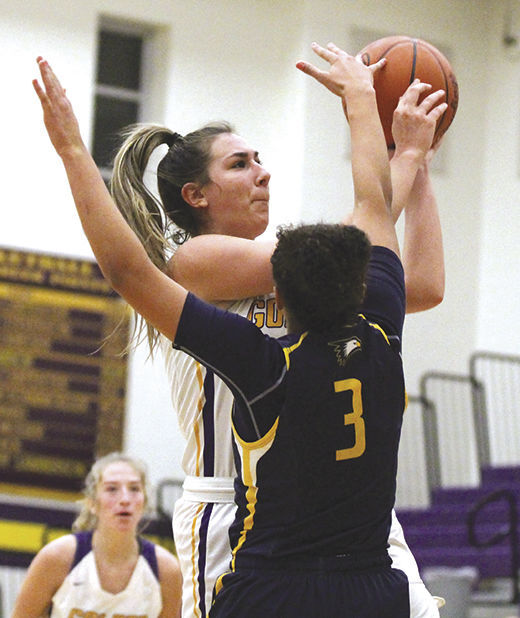 Bryan’s McKendry Semer (middle) puts up a shot over Toledo Notre Dame’s Olivia Sims during Monday’s girls basketball game at Bryan High School. Semer scored on the play and was fouled by Sims. 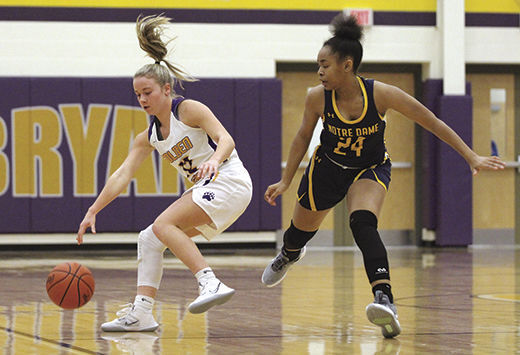 Bryan’s McKendry Semer (middle) puts up a shot over Toledo Notre Dame’s Olivia Sims during Monday’s girls basketball game at Bryan High School. Semer scored on the play and was fouled by Sims.

Bryan’s bid to knock off one of the best Division I girls basketball programs in Ohio came up short by the slimmest of margins on Monday.

Toledo Notre Dame’s Olivia Sims buried a go-ahead 3-pointer with 23 seconds left, and the Eagles held on to edge the Golden Bears 45-44 in a nonconference matchup between state-ranked teams.

“Really proud of our kids because you lose Reese (Grothaus) and we could have just shown up tonight and got waxed by the No. 3 Division I team in the state,” Bryan coach Todd Grosjean said. “Our kids didn’t do that.

“That shows the sign of the character these kids in that locker room have. They just battled, they weren’t intimidated. We asked them to play with no fear, which I thought they did the whole game. Just really proud of our effort.”

Bryan, ranked 11th in Division II in the Ohio Associated Press poll, dropped to 9-2 overall while Notre Dame, the third-ranked team in Division I and a state semifinalist seven of the last nine years, improved to 4-0.

Bryan was playing its first game without its leading scorer in Grothaus, who left with a left knee injury late in the Golden Bears’ win over Wauseon on Friday. Grosjean said Monday that the 5-foot-7 sophomore suffered a torn ACL and is likely done for the season.

Despite being shorthanded, Bryan came out aggressive.

The Golden Bears dominated the boards 16-9 in the first half, with Semer converting multiple putbacks and Bryan getting second-chance opportunities, to take a 29-22 lead at the break. The Golden Bears led by as many as 11 after Semer found a cutting Antigo for a basket to cap a 10-0 run in the second quarter for a 27-16 lead. A pair of Allie Zimmerman free throws made it 29-18 Bryan with 2:30 left.

“That was frustrating and to be honest, we did a poor job defensively guarding the ball 1-on-1,” Notre Dame coach Travis Galloway said. “Because of that, we had to over-help and stuff and got us out of position to rebound because they are physical. So when we got out of position, they just bulldozed to the rim.”

Notre Dame, however, chipped away at the lead with the help of its talented Division I college prospects.

Olivia Sims, a 5-9 senior guard who has verbally committed to Division I Oakland University in Michigan, scored five of her team-high 15 points in the final 1:25 of the first half to cut the Eagles’ deficit to 29-22.

Grace VanSlooten, a 6-2 junior forward who is ranked 16th in the country in her class according to espn.com, scored eight of her 16 points in the second half and added eight rebounds and three blocks.

Notre Dame’s Vaeh Cable knocked down a corner 3-pointer to give the Eagles a 40-39 lead with 4:24 left, their first lead since 4-2 less than two minutes into the game.

Semer found Addie Arnold for a 3-pointer to give Bryan a 42-40 lead, but VanSlooten knocked down a turnaround jumper in the paint to tie the game at 42-42.

Semer’s putback off Zimmerman’s missed 3-pointer gave the Golden Bears a 44-42 lead with 57 seconds left. But on the ensuing possession, Sims, who sat most of the second half with four fouls, drained the game-winning 3-pointer.

“I give them a ton of credit. We were fortunate enough to knock down some huge (shots) that we needed to in the fourth, got a little momentum, kind of got them sped up a little bit in the fourth finally, and Olivia hit a big 3 to win it for us.”

Bryan turned the ball over on the ensuing possession, and in the final four seconds, the Eagles ran out the clock on inbounds plays in securing the win.

“Hopefully our kids realize they can play with just about anybody on our schedule and moving forward, we’ve just got to keep getting better,” Grosjean said. “We had a few turnovers there late that hurt.

“... I thought Shallyn stepped up tonight, made the VanSlooten girl guard her on the perimeter, which was huge. We challenged her, we weren’t intimidated and I thought our kids, top to bottom, competed.”

Kendall Braden added seven points, while Aly Ray had four points and eight rebounds for Notre Dame. The Eagles shot 48 percent (19 of 40) from the floor and forced 12 turnovers.

Bryan had five turnovers in the fourth quarter and made just 1 of 6 3s.

“We got some good looks at 3, but we had some extended minutes, obviously not having Reese in the rotation puts somebody else out there longer than maybe they’re accustomed to,” Grosjean said. “... What we typically do to other teams, I think they probably did that to us a little bit, especially in the fourth quarter and it showed.”

Bryan will look to bounce back Saturday when the Golden Bears travel to Edgerton for a nonleague game.