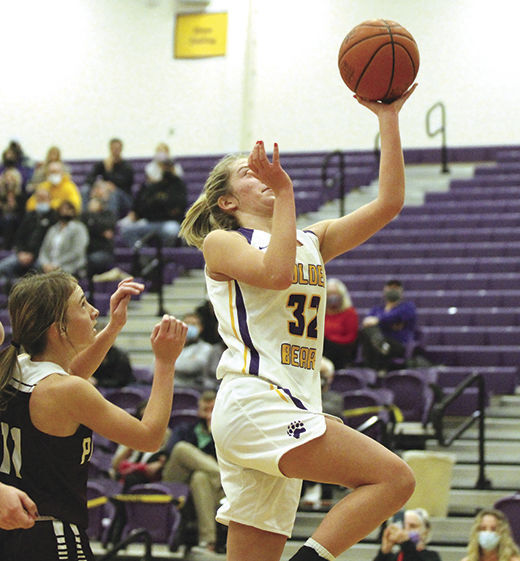 Bryan’s Kloee Antigo (32) puts up a shot after getting past Paulding’s Janae Pease during the Image Pro Holiday Classic championship on Dec. 29 at Bryan High School. Antigo made the shot to beat the second-quarter buzzer. 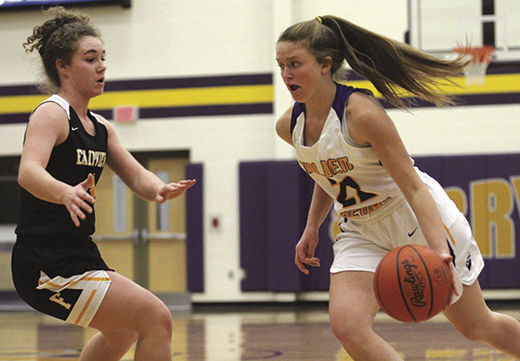 Bryan’s Addie Arnold (right) drives to the basket while Fairview’s Carrie Zeedyk defends during the first day of the Image Pro Holiday Classic on Dec. 28 at Bryan High School.

Bryan’s Kloee Antigo (32) puts up a shot after getting past Paulding’s Janae Pease during the Image Pro Holiday Classic championship on Dec. 29 at Bryan High School. Antigo made the shot to beat the second-quarter buzzer.

Bryan’s Addie Arnold (right) drives to the basket while Fairview’s Carrie Zeedyk defends during the first day of the Image Pro Holiday Classic on Dec. 28 at Bryan High School.

Following the matchup with the Indians? A showdown with one of the top Division I programs in Ohio in Toledo Notre Dame on Monday, then another tough NWOAL matchup at Archbold on Jan. 14.

The Golden Bears (8-1, 1-0 NWOAL), ranked No. 11 in Division II in the latest Ohio Associated Press girls basketball poll, are coming off their first loss of the season after falling to top-ranked Napoleon 47-43 on Tuesday. The Wildcats (9-1) used an 18-2 first-quarter advantage to get the narrow victory.

Wauseon (7-2, 1-0 NWOAL) will be the fourth straight team Bryan has faced that has seven or more victories.

“We’ve just got to get better,” Bryan coach Todd Grosjean said after Tuesday’s loss to Napoleon. “We compete so hard in practice every day, I know these kids will show up. They’re not satisfied by any means. They’ll come back, roll their sleeves up and find a way to get better.”

Wauseon, whose lone losses this season came to Fairview (8-2) on Dec. 7 and Napoleon on Dec. 30, have been led by Marisa Seiler. The 5-foot-9 junior guard/forward leads the NWOAL in scoring at just under 20 points per game; she erupted for 34 points in the Indians’ 71-34 win over Maumee on Dec. 1 and had 27 in a 53-45 victory over Defiance on Tuesday.

Last season, Seiler helped the Indians post a pair of victories over the Golden Bears. She had a game-high 20 points in a 60-49 overtime victory in the regular season, then scored 11 points in Wauseon’s 54-49 win in a Division II sectional final.

“They’re 7-2 and they’re playing well, so we’re going to have our hands full,” Grosjean said. “We’re going to need another defensive effort like we had (against Napoleon) and we’ll see what happens.”

For the Golden Bears, sophomore Reese Grothaus leads a balanced attack by averaging around 12 points per game. Senior Shallyn Miley chips in 10 points per game, while senior McKendry Semer adds 9 points per contest.

On Monday, the Golden Bears will face one of the best players in the country in Notre Dame’s Grace VanSlooten. The 6-2 junior forward, who has numerous offers from Division I colleges, is the 16th-ranked player in the 2022 class (ranked fifth at her position), according to espn.com.

Senior guard Olivia Sims (5-9), who has verbally committed to Division I Oakland University in Michigan, is among several other standouts for the Eagles.

Notre Dame, which went 24-3 en route to a Division I state semifinal appearance last season before the remainder of the tournament was canceled due to the coronavirus pandemic, has made seven state tournament appearances (all since 2012).