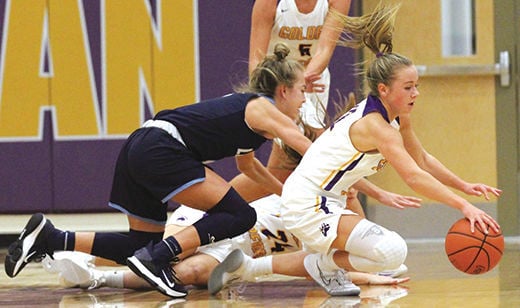 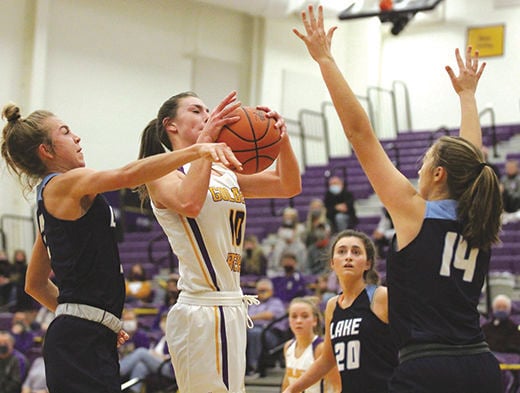 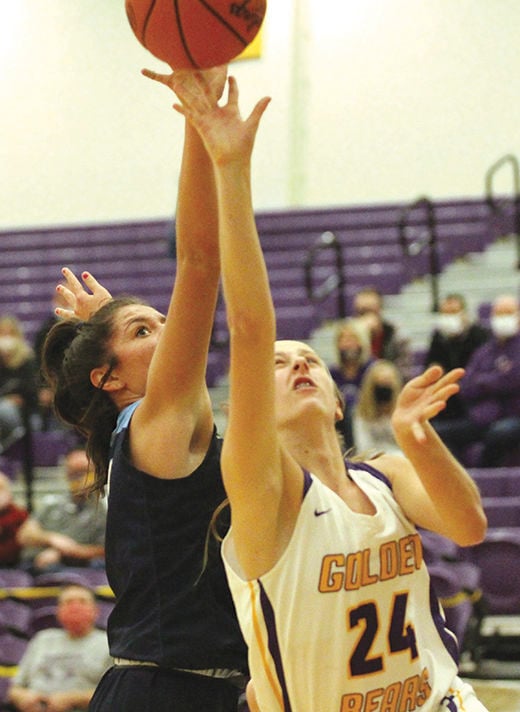 Bryan's Bre Long (24) puts up a shot after getting around Lake's Hayley St. John during Friday's girls basketball game at Bryan High School.

Bryan's Bre Long (24) puts up a shot after getting around Lake's Hayley St. John during Friday's girls basketball game at Bryan High School.

Bryan’s girls basketball team turned the tide on Lake to open the season with a win.

The Golden Bears used strong defensive play to build a 14-2 first quarter lead and had a balanced offensive attack overall in knocking off the Flyers 57-41 in a nonconference game Friday at Bryan High School.

“First games are always difficult, we played them the last game of the year last year (56-40 loss on Feb. 15) and you don’t know what changes they’re going to make, you don’t know personnel,” Bryan coach Todd Grosjean said. “For us to get a win — they were picked to win the NBC (Northern Buckeye Conference) — that’s a big win for us. Really proud of our kids.”

Bryan (1-0) had five players with at least six points, including three in double figures. Shallyn Miley, a 6-foot senior, scored 10 of her team-high 14 points in the first half and added nine rebounds, while McKendry Semer, a 5-9 senior, notched an 11-point, 14-rebound double-double.

Delilah Taylor chipped in 10 points off the bench; Allie Zimmerman knocked down two 3-pointers and tallied nine points; and Bre Long added six points and five boards off the bench as well.

“I was really pleased with Delilah Taylor, didn’t start tonight but she gave us huge minutes off the bench at the guard spot. Allie Zimmerman got her first start I believe in her career and did a great job stepping in. I just thought all the way down the bench we had great contributions.”

Miley scored the final six points of the first quarter, including a drive for a bucket, a putback and a layup off a steal, to give the Golden Bears the 12-point advantage.

Lake (0-1), which made a remarkable run as a No. 9 seed to win a Division III district title last season, pulled within 24-17 at halftime after Delani Robinson drained a 3-pointer at the buzzer. The Flyers cut the Golden Bears’ lead to 38-29 late in the third after Robinson buried three 3-pointers in the final 1:37.

That was as close as Lake would get, though.

Zimmerman knocked down a shot from well beyond the arc at the third-quarter buzzer to push the lead back to double digits. Zimmerman found a cutting Taylor for a basket to push the lead to 45-32, and Miley found Semer for an easy bucket in the paint for a 47-34 Bryan lead.

The Golden Bears went 8 of 12 from the free throw line in the final 2:43 to maintain the double-digit lead.

“We struggled and I think a lot of that though is because of Bryan. They’re a solid defensive team, they have a lot of size, they’re aggressive, they’re physical. But we couldn’t really get things going.”

“There were spurts where we played better, but I think (Bryan’s defense) definitely set the tone where you get into a hole early on and it’s tough to get back,” Nowak said. “But I give our girls credit. We battled, we fought back, we had little spurts to where we played much, much better more towards what we’re capable of.”