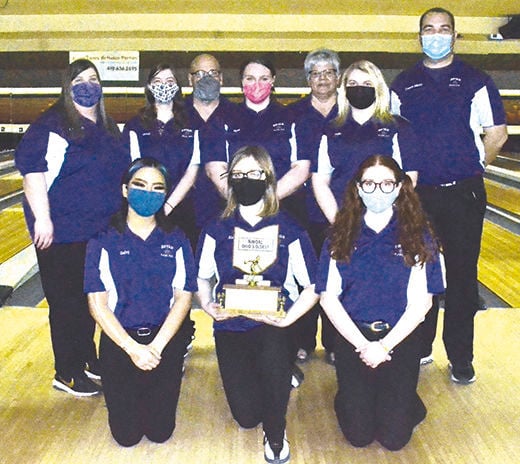 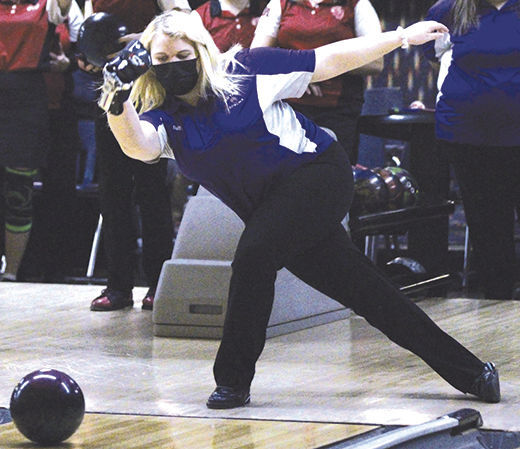 Going into the 2020-21 season, Bryan girls bowling had won either a share or an outright Northwest Ohio Athletic League title since the conference’s inception of the sport in 2011-12.

And the Golden Bears continued their dominance in the NWOAL tournament on Saturday.

“It feels awesome,” Bryan coach Dustin Gillett said. “I’m excited for the girls. Beginning of the season, we were all rebuilding our team here and trying to come back. We weren’t sure. So we said, ‘We’re going to try for it,’ but we weren’t real sure. It was a what if type of year.

“The girls did well and they hung in there. So, I feel really excited for the girls to be able to continue on that (streak).”

“But finishing third, that was our goal. We finished ahead of Wauseon, that was terrific. But Bryan, they’re the dominant team, so I was really happy with third place.”

Faith Harding bowled a tournament-high 597 (205, 216, 176) series for the Golden Bears, with her second and first games being the first and third highest games of the tourney. Harding also earned all-NWOAL first-team honors with a season-long and league-high 202 average.

“Faith bowled really, really well (Saturday),” Gillett said. “... She bowled really well on this tough pattern, and was very impressed with her and her ability to fight the tough lanes. So that’s very promising work from her.”

“We struggled the first game a little bit. And again, same with the boys (on Friday night), it was just nerves,” Gillett said. “But to get them rolling in that second game, we just got them lined up a little better and we got them making shots. That was huge for us.

“We kind of carried that over to the third game a little bit. We started struggling towards the end of the third game. But I think the second game mentally helped us a lot. But... we just did not do well in Bakers. We had an 80-pin lead or something on Swanton (going into Bakers), and we were hoping to win the tournament too — we’d like to win it all outright. But Swanton had some really good games, we did not.”

“We talked about it all week long about picking our spares up,” Patrick Henry coach Pat Woods said. “And the first game, not so good, but second game we did really well, we improved. We came on a little bit, slacked off a bit that third game.

“(But) I thought today’s performance was excellent for them. We did a good job.”

The Golden Bears, who won the OHSAA Division II state title last year, and the rest of the NWOAL will next take the lanes in the 12-team OHSAA Division II sectional tournament at 5 p.m. Friday at River City Bowl-A-Way at Napoleon.

The top three teams and individuals not on an advancing team go to the district tournament at 10 a.m. Feb. 18 at Westgate Lanes in Lima.

“We left a lot of single spares out there, and for us to just cover half of those would be huge for us going forward,” Gillett said. “But, we come back to practice on Monday and get back to the drawing board and start shooting spares again.

“And that’s what it’s going to come down to. Spares are going to win it.”