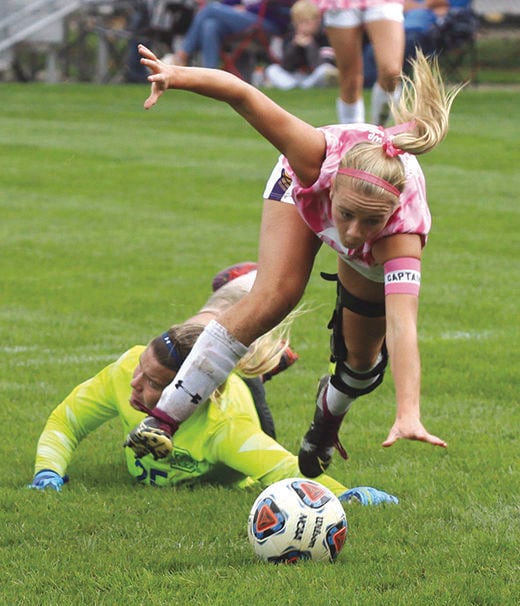 Bryan’s Allie Zimmerman (right) gets tripped up by Defiance goalkeeper Bella Flores during Saturday’s girls soccer match at Recreation Park. Zimmerman drew a penalty on Flores on the play. 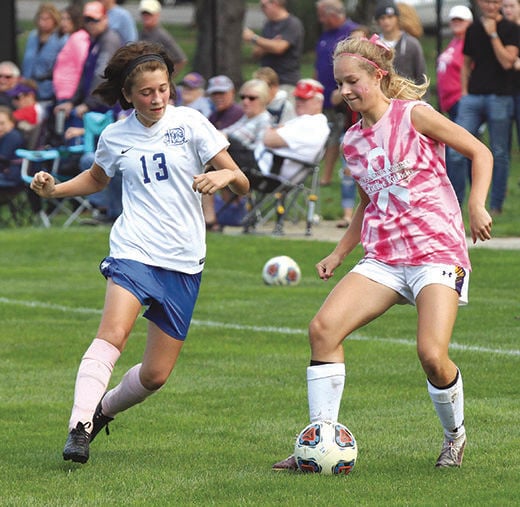 Bryan’s Rachel Fireovid (right) gets to the ball before Defiance’s Baylee Ingle during Saturday’s girls soccer match at Recreation Park.

Bryan’s Allie Zimmerman (right) gets tripped up by Defiance goalkeeper Bella Flores during Saturday’s girls soccer match at Recreation Park. Zimmerman drew a penalty on Flores on the play.

Bryan’s Rachel Fireovid (right) gets to the ball before Defiance’s Baylee Ingle during Saturday’s girls soccer match at Recreation Park.

A quick start on Saturday fueled Bryan to its 15th victory of the season.

The Golden Bears scored three goals in the first 10 minutes, added two more in the second half and cruised past Defiance 5-0 in a nonleague girls soccer match at Recreation Park.

“It was good. Offensively, we created plenty of chances so it was good to get early goals just to kind of set the tone,” Bryan coach Adam Subasic said. “Could have gotten more, but it was good to at least get those and get a solid win.”

With an enormous Northwest Ohio Athletic League showdown with Wauseon looming later this week, the Golden Bears made sure to focus on taking care of Defiance first.

“We always focus one game at a time, that’s kind of what I preach. Just like any other team, no matter who we’re playing it’s a different day so we have to come out ready to go,” Subasic said. “We obviously got a couple goals early, there were things we still need to work on and just kind of step it up which sometimes can be hard against a team that is a little weaker.”

Delilah Taylor scored a goal off a pass from Macy Burton to give Bryan a 1-0 lead with 37:53 left in the first half. Less than a minute later, Kailee Thiel found Taylor for a goal as Bryan took a 2-0 lead.

With 30:29 remaining, Marah Smith blasted a shot from outside the box that deflected off Defiance goalkeeper Bella Flores and into the net for a 3-0 Bryan advantage. Tabithah Taylor was credited with the assist.

Delilah Taylor completed a hat trick after she headed a loose ball in the box for a goal with 23:01 remaining. Thiel capped off the scoring after firing a long shot from outside the box over Flores for a 5-0 lead with 14:04 left.

The Golden Bears had an 18-3 advantage in shots on goal. Calysta Wasson had two saves in the first half and Allie Redhead one in the second half for Bryan, while Flores had 13 saves.

Bryan (4-0-1) will cap off the regular season with one of its biggest matches in school history. The Golden Bears will be shooting for at least a share of their first NWOAL title when they host Wauseon (12-1-1, 4-1 NWOAL) at 7 p.m. Thursday at Recreation Park. Evergreen is tied atop the league standings with Bryan and is at Swanton on Thursday.

“It’ll be a big game and we’ll see who shows up that night,” Subasic said. “We just have to be ready to go.”