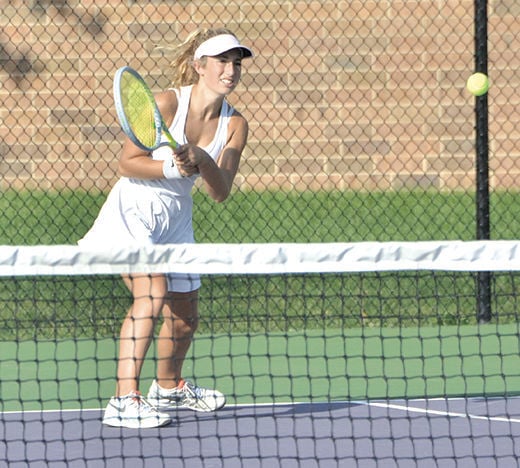 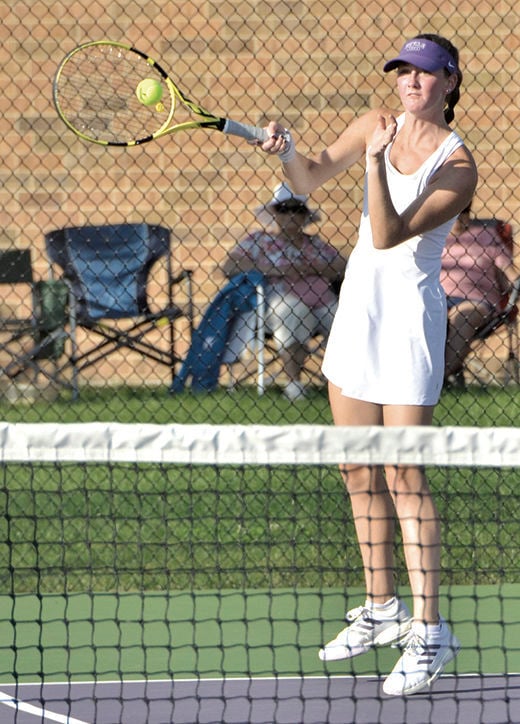 In Brooke Taylor and Katie Seaman’s No. 2 doubles match, the duo traded games in the second set with Toledo Central Catholic’s Jen Pryer and Jordan Traver.

If they won, the Golden Bears senior pair would clinch the Ohio Tennis Coaches Tournament team match against the Fighting Irish, and get Bryan a step closer to its first trip to the Final Four since 1997.

Taylor and Seaman did just that. After going up 2-1 in the second set and winning the first 6-3, they kept a one-game lead until clinching a 6-4 victory to help Bryan win 4-1 in a Division II Northwest District girls tennis semifinal on Monday at Bryan High School.

“We were just trying to take it point by point,” Seaman said. “Coach (Mitchell Owens) told us last night, ‘We got to keep our blinders on. We shouldn’t look at anyone else.’ So that’s really what we were trying to focus on doing and just focus on what we knew we had to do.

“Because we kind of knew, even without looking, that we were the clinching match. But we still wanted to focus on our match as much as possible.”

“I didn’t look at any other court — I knew that would stress me out more,” Taylor said. “I just took it point by point, like Katie said, and I think we really focused in with the wind. It added another factor we weren’t really expecting.

“And then they changed the lineup a little bit that we weren’t expecting, but it was nothing we couldn’t handle and we just stayed focused. I think we played a lot better that second set as we were getting more comfortable with the wind.”

This win advanced the Golden Bears (23-0) to the district final against Shelby next week. No date has been finalized yet.

“This is uncharted territory for me and this team, and it’s been since 1997 since we’ve even had the opportunity to play for a Final Four appearance,” Owens said. “All year, we just wanted the opportunity. Now what happens, happens — we’ll find out next week when that match gets scheduled. But right now, we are thrilled just to be in the position we’re in and to have beaten a quality opponent — like, high-quality opponent.

“It just speaks volumes to what this team has been about all year.”

Reese Grothaus and Haylee Wheeler took down Central Catholic’s Isabella Spinazze and Jane Cowell after dropping the first set 6-4. The pair came back with a 7-5 win in the second set and a 10-7 victory in a tiebreaking third.

The Golden Bears’ Emilee Bassett lost her No. 1 singles match to Lucia Spinazze 6-3, 6-1 for the Fighting Irish’s lone win of the day.

“This was a team win across the board because we debated whether to change our lineup, and we just said, ‘This has gotten us to 22-0. Why would we change our lineup?’” Owens said. “They could throw whoever they want at us, and we’ll just see if we’re good enough to counterattack — and we were.

“I would never have dreamed when I woke up this morning that we would have a 4-1 win against these guys.”