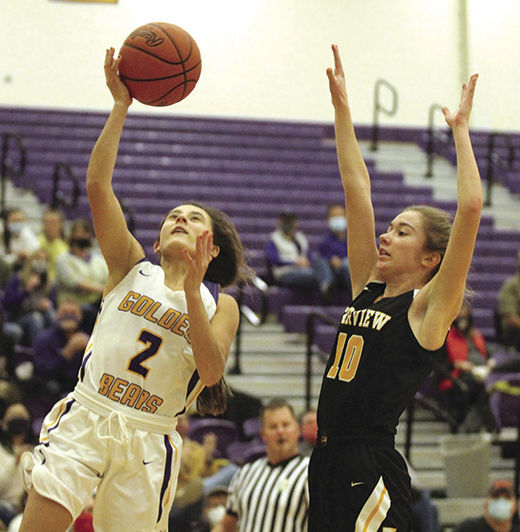 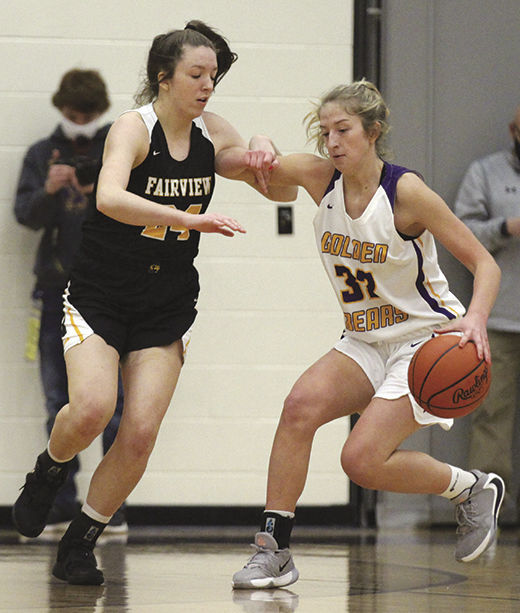 For the first time this season, Bryan’s girls basketball team was in a pressure-packed situation late in a game.

Despite a slew of turnovers to help Fairview turn a 19-point third quarter deficit into five with four minutes left, the Golden Bears finished strong.

Junior guard Delilah Taylor scored four points in a key 24-second span, senior guard Brooke Lamberson knocked down all six of her free throws and Bryan held off Fairview 53-43 in the second game of the Image Pro Holiday Classic on Monday at Bryan High School.

“We were up 17 (late in the third) and we knew (the Apaches) were going to make a run at us; we tried to curl up in a ball there a couple possessions and we didn’t help ourselves,” Bryan coach Todd Grosjean said. “Thank goodness Brooke Lamberson stepped up, a senior, went to the free-throw line multiple times, made free throws. Delilah Taylor made a couple free throws and that was huge to keep our lead.”

The Golden Bears improved to 7-0 and advanced to take on Paulding in today’s 6:30 p.m. tournament championship at Bryan. Paulding (9-1) topped Stryker 64-51 in the first game Monday.

Lamberson had nine points, including 7-of-8 free throws, Kloee Antigo and Taylor both had four points and Shallyn Miley added three points and a game-high 10 rebounds.

After Miley’s drive for a floater gave Bryan a 39-22 lead with two minutes left in the third quarter, Fairview went on a 10-0 run to pull within seven with 6:07 left. Carrie Zeedyk, who scored a game-high 21 points for Fairview, drove for a score and Paige Ricica stole the ensuing inbounds pass and scored in the final 12 seconds of the third.

Fairview forced 11 turnovers in the second half as the Apaches’ full-court press caused fits for Bryan.

“I told the girls that was my fault, I didn’t think we should pressure the whole game and looks like we should have been doing that probably the first half,” Fairview coach Russell Zeedyk said. “So we had a nice comeback there and just couldn’t get it to go our way at the end.”

Taylor and Lamberson were big reasons why.

After Fairview pulled within 43-38 with 4:10 left when Carrie Zeedyk buried a 3-pointer, Taylor sank both ends of a 1-and-1 to extend the lead to seven with 3:05 left. On the ensuing possession, Taylor deflected Karrie Smith’s pass, which was stolen by Semer.

Semer lofted a pass ahead to Taylor, who converted the transition layup to give the Golden Bears a nine-point cushion.

“My role on the team is to create a spark, and I think that’s what I do,” Taylor said.

“That’s what good teams do,” Taylor said of weathering Fairview’s comeback. “That’s what coaches talk about in the locker room. They make a run, we make a run and in the end, we just have to come out on top and make our runs last longer.

“(Getting the win’s) very exciting and coach said that it’s good experience for all of us to be in a situation like that with lots of pressure.”

Bryan used a 12-0 run in the second quarter to take a 27-13 lead. Arnold had five points, including a 3-pointer, Grothaus both buried a 3 and Semer had four points during the run.

Semer sparked an 8-0 Bryan run to start the third, and Antigo’s bucket off a turnover gave Bryan a 35-16 lead.

“They just put so much pressure on you it’s hard to get into any kind of a set play,” Russell Zeedyk said. “I didn’t think our girls were doing a really good job of attacking the pressure and getting to the basket. We were kind of just letting them push us out, not getting anything out of it.

“We talked in the pregame that need to attack the pressure and try to get shots at the basket, but we weren’t doing that. But that’s a credit to their defense, they play really good defense.”

Ricica added six points and four rebounds, while Carrie Zeedyk and Kelly Crites both had five boards for the Apaches. Fairview shot 32 percent (13 of 41) from the floor and 61 percent (11 of 18) from the free-throw line.