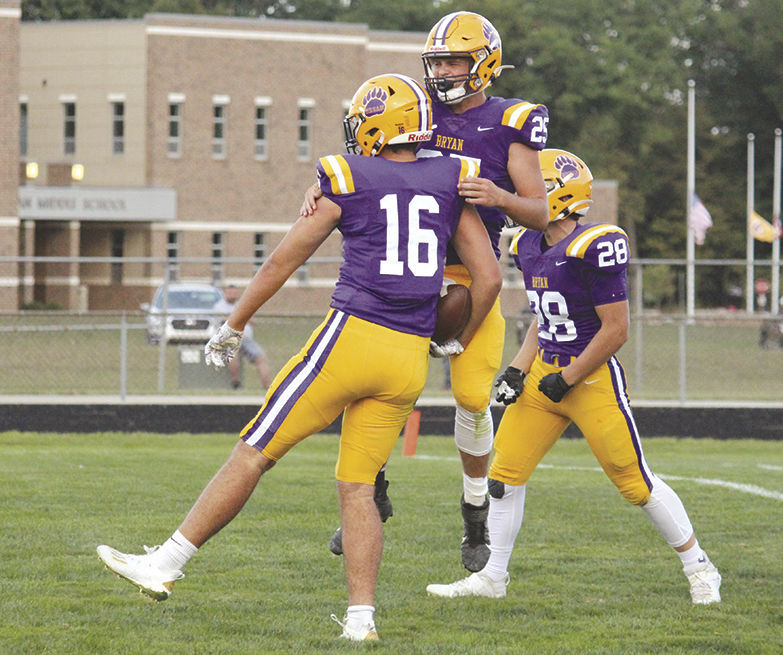 Bryan’s Breven Deckrosh, middle, and Sam Herold, right, celebrate with Titus Rohrer after Rohrer recovered a fumble and returned it for a touchdown during Friday’s game against Patrick Henry at Golden Bear Stadium. 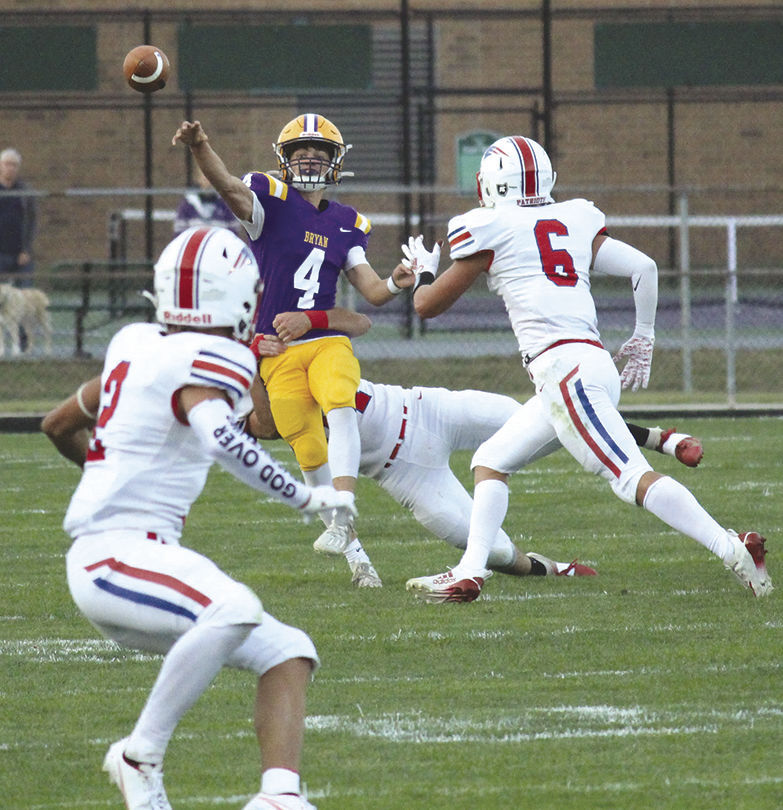 Bryan’s Ethan Wasson (4) throws the ball while under pressure from Patrick Henry’s Noah Kistner (back) and Layke Crossland (6) during Friday’s game at Golden Bear Stadium. Patrick Henry’s Clayton Feehan (2) also defended on the play as the pass was incomplete.

Bryan’s Breven Deckrosh, middle, and Sam Herold, right, celebrate with Titus Rohrer after Rohrer recovered a fumble and returned it for a touchdown during Friday’s game against Patrick Henry at Golden Bear Stadium.

Bryan’s Ethan Wasson (4) throws the ball while under pressure from Patrick Henry’s Noah Kistner (back) and Layke Crossland (6) during Friday’s game at Golden Bear Stadium. Patrick Henry’s Clayton Feehan (2) also defended on the play as the pass was incomplete.

The Golden Bears will look to keep their momentum going when they host Liberty Center in a Northwest Ohio Athletic League matchup at 7 p.m. Friday at Golden Bear Stadium.

“We have to maintain the physicality that we played with Friday night. That was a hard-hitting ball game and our kids, they took it to another level,” Bryan coach Grant Redhead said of the Golden Bears’ 27-21 come-from-behind win over Patrick Henry. “They took a step in the program, and I was proud to see it because they didn’t shy away, they just kept going and they started taking over and Patrick Henry started backing away.”

Redhead wants his team to break a recent trend.

“We all want to play at the other guys’ place, it seems like lately,” Redhead said. “It’s going to be a good game; We’ve got to ride the momentum in what we did this week and come to play.”

Liberty Center has had a wealth of success under coach Casey Mohler, who is 30-9 in his fourth year as coach. The Tigers went 10-2 last year, shared the NWOAL title with Archbold and reached the Division VI, Region 23 semifinals before falling to the Bluestreaks.

In 2018, Liberty Center finished 12-2 and won the Division V, Region 18 title before losing to Orrville in a state semifinal.

Liberty Center has plenty of weapons on offense, including Max Phillips. The 5-foot-11, 203-pound senior running back leads the NWOAL with 66 carries for 451 yards (6.8 yards per carry) and seven touchdowns.

“Whenever you play the Wing-T teams, you’ve got to play assignment football,” Redhead said. “It’s kind of like playing an option team; you just can’t get out there and run around.

“That’s what we’re stressing, every man doing his job and doing it for the betterment of the team and just getting after it. It’s going to be a physical game again and we’ve got to match the physicality and play with some emotion.”

Meanwhile, Bryan is coming off its best offensive output of the season in last week’s win.

He said he is continuing to get more comfortable in the pocket each week.

“The line’s been doing great, the protection gets better and better each week and I’m proud of those guys,” Wasson said. “They’re doing a great job and making me look good. If anybody deserves the glory, it’s the O-line.”

Senior tight end Titus Rohrer (6-6, 248) hauled in nine catches for 132 yards and a touchdown a week ago. He also scooped up a Gavin Jackson fumble that was forced by Bryan’s Breven Deckrosh and returned it 75 yards for a touchdown late in the first quarter.

Overall, Rohrer has 11 catches for 158 yards, senior wideout Caleb Kepler has five catches for 108 yards and senior wideout Decota Shaw has 60 yards on six catches, including a go-ahead 6-yard touchdown from Wasson with 3:19 left to give Bryan a 27-21 lead against Patrick Henry.

Playing up-tempo on offense was key last week, according to Shaw.

“We started moving a little faster in the second half with PH,” Shaw said. “We started picking up on the offense a little more during the third week rather than the first two.”

Redhead said he has been stressing getting off to a good start and playing solid in all four quarters against the Tigers.

“We can’t put ourselves in a hole. We can’t make mistakes early in the game, we can’t come out to a slow start against a good opponent like Patrick Henry or Liberty Center,” Redhead said. “We’ve got to come out firing on all cylinders and get the job done from snap one.”

Friday’s game will also be Homecoming for the Golden Bears.