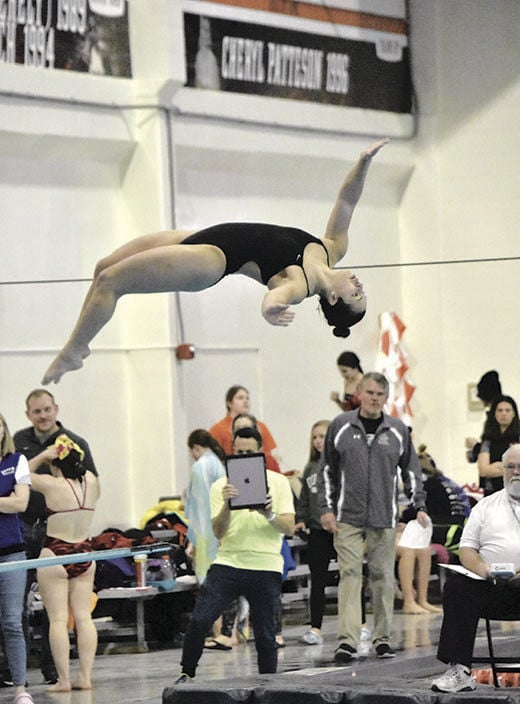 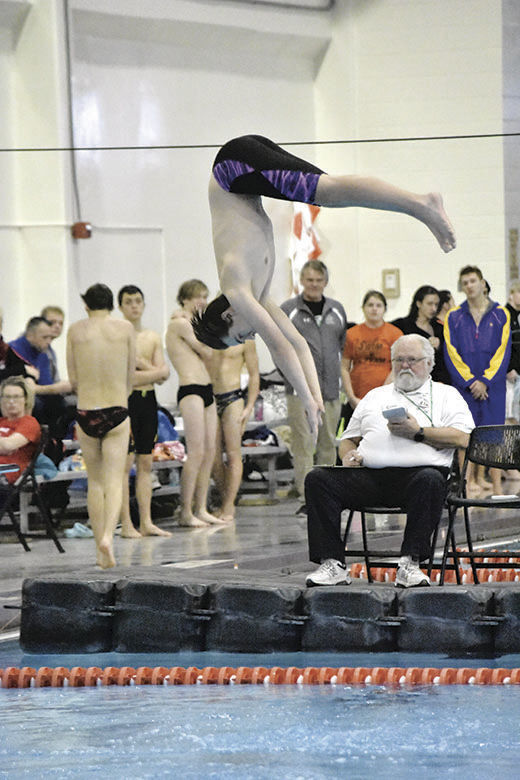 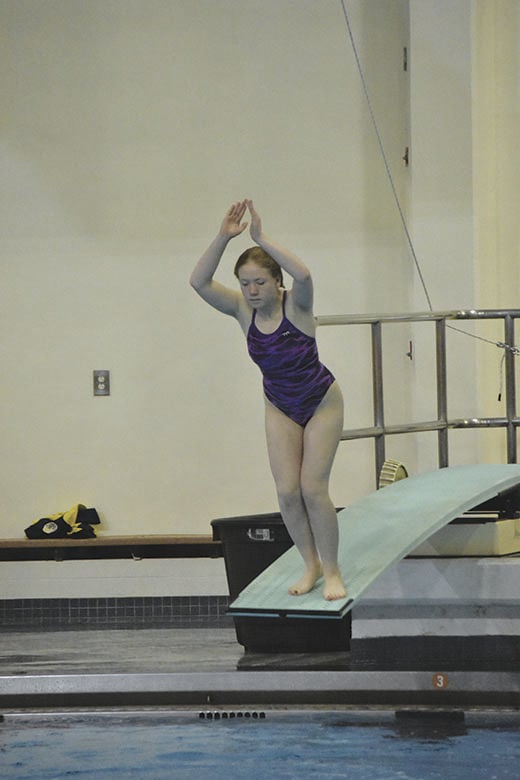 BOWLING GREEN — One of the top five spots on the podium at the Division II district diving championships was occupied by an area diver, as Bryan’s Taylor Peters finished as the district runner-up to qualify for next week’s state meet at Canton McKinley High School.

Tinora’s Lauren Melia led after both rounds of cuts and held the lead after the 11th and final dive. The Tinora sophomore was in first place with a score of 218.5 after five dives and increased her lead after three more dives (331.75). She finished with a score of 452.32.

Peters was district runner-up with 441.65 points, while Napoleon’s Audrey Seemann was third with a score of 434.85, and Addison Heitman was fifth with a score of 369.40.

“I feel really proud of myself,” Melia said. “I have worked very hard this season. I just kept pushing through.

“I am excited about going back to state,” she added. “I loved the experience. It was so much fun. I really hope I can do better this year.”

Going back to the state meet for her fourth time is Peters, who was in third place after the first two rounds of cuts. Peters had a score of 197.8 after five dives and 301.4 after eight dives. She scored more than 141 points over her final three dives to jump to second place.

“It’s still a rush,” Peters said, when asked about returning to the state meet. “I haven’t done much diving this year. I have only been in one 11-dive meet before this. I wasn’t sure what dives to put in. It was difficult because I just had to wait and see.”

“She was consistently good,” Bryan diving coach Kathryn Rockey said. “There were some dives we had not had much time to play around with, but she should be ready with them next week.

“There was some really tough competition here today, especially in the top three,” Rockey added. “To place second, she did phenomenally.”

Peters placed eighth at the state meet a year ago.

Seemann is also making her fourth trip to the state meet. She is just the second female Napoleon diver to qualify for the state tournament four times. She was second after the first five dives, with a score of 203.8 and held that position after eight dives (316.95).

Napoleon diving coach Kristen Shepard said she was especially proud of how Seemann, who has fought through an injury most of the season, battled at the district meet.

“She’s a fighter, and this was important to her,” Shepard said. “She probably had the least amount of board time than any diver here because of her injury. To not only make the podium, but finish third, says a lot.”

“I am very happy with the way I dove,” Seemann said. “I don’t think I could have done any better. I am excited to see what I can do next week at state. I am ready to redeem myself.”

Seemann placed ninth last season at the state meet — one spot off the podium.

Heitman, also a senior, is making her third trip to the state meet after her fifth-place finish.

“I worked my butt off this season,” Heitman said. “I worked for this day. I got up early and was so excited this morning. I was ready to go and do the best I could.”

“She didn’t have her best meet,” Shepard said. “There are probably a couple of dives she wishes she could have back. But it says a lot about how far she has come that she can not have her best meet and still finish squarely on the podium.”

“I think they both did very well,” Shepard said. “They are two freshmen with little experience at a meet this size. They came in and were not overwhelmed.

“Paige made the first cut, which was half the field,” Shepard added. “To be in the top 20 is quite an accomplishment.”

Wauseon’s Cameron Estep finished 16th, making the final cut, with a score of 279.0. Other finishers for the Indians were Macy Gerig in 27th, Eva Mennetti in 40th and Makayla Kubshull in 43rd.

There were 46 divers in the girls meet.

In the Division II boys district meet, Bryan’s Aiden Andrews advanced past the final cut and placed 16th overall with a score of 177.25.

The top nine divers advanced to the state meet for the boys.