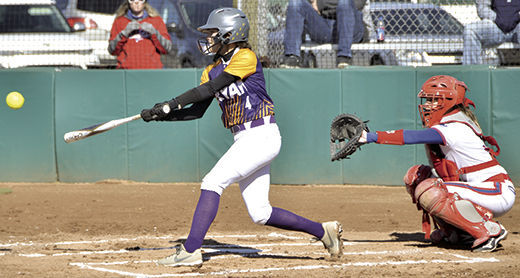 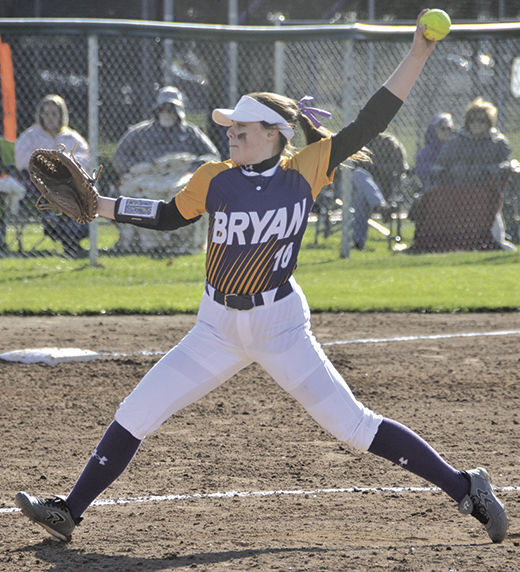 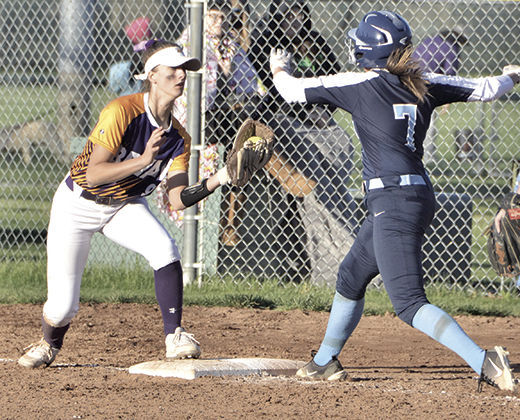 The Golden Bears secured at least a share of the league title with a 10-1 NWOAL win over Patrick Henry on Friday at Recreation Park.

Bryan’s first NWOAL title came in 2017, when the Golden Bears (6-0 NWOAL) went 6-1 and shared the championship with Archbold. Bryan will have to face the Bluestreaks on Monday in Archbold for a chance to win its first outright league title. Evergreen (5-1 NWOAL) is still in the hunt.

“I’m just super proud of these girls. I knew they had a lot of heart and grit to them,” Bryan first-year coach Samantha Fowls said. “We’re not in an easy league by any means, and we pulled out some of those tough ones when we could’ve just easily given up.

“(We’re) not satisfied with the tie, so hopefully Monday we roll around and come out strong for Archbold.”

They opened up the first two innings with five runs (two in the first, three in the second) with starting pitcher Addie Arnold dominating in the circle. The junior righty fanned eight of her first 10 batters faced through three innings and struck out the side in the second and third innings.

Ella Voigt had an RBI single in the bottom of the third to make it 6-0, while Arnold pitched a scoreless fourth — and added two more strikeouts — in the top of the frame.

Alexandra Vreeland slapped a two-RBI single up the middle in the bottom of the fourth to make it 8-0 Bryan.

After four innings, however, Fowls turned to Vreeland to pitch the remaining three frames, since the Golden Bears were playing nonleague foe Montpelier in the second game of a doubleheader on Friday and wanted to start Arnold for that contest.

In the fifth and sixth innings, Patrick Henry got the bases loaded several times, drawing four walks, reaching via error twice and singling once (Jazmine Miranda).

“What we’ve been trying to preach this whole year is plate discipline,” Patrick Henry coach Tracy Greene said. “... When they start to see other girls are being walked, we start to have a little more patience.”

But the Patriots could only push one run across in those situations, and only slimmed the lead to 8-1 heading into the bottom of the sixth.

“I think get kind of in that mode of Addie’s just going to throw all of our games. We’re just use to Addie throwing, and other girls don’t get a lot of time on the mound,” Fowls said. “So for them being able to adjust and throw strikes and let our defense do their work is key for us and major for us.

“Letting (Vreeland) get that time is crucial, especially going into tournament. Anything can happen any day, (and) we always need a backup pitcher, or two, or three.”

Vreeland added another RBI single in the bottom of the frame to score Scout Smith — who tripled in the at-bat before — to make it 9-1 Bryan. Kailee Thiel also had an RBI single two at-bats later to score Bre Long (reached via fielder’s choice) to make it 10-1 heading into the seventh.

In the top of the seventh, Vreeland let up two singles, but the senior lefty forced two fielder’s choices and a fly out to secure the share of a NWOAL title.

Arnold tallied 10 total strikeouts and allowed only two hits for the win. She also singled in the first and hit a sacrifice fly in the second.

“We’re at that point of the season where we’re getting a little tired, but I told them, ‘We’ve got to stick with it,’” Fowls said. “... We’re not playing our best, but we just got to keep working. I think we’re in a downhill rollercoaster and we’ve got to figure out if we want to be on top or bottom.

Ella Meyer threw a complete game for the Patriots. She struck out four, allowed zero walks, 13 hits and 10 runs.

“Ella did a great job pitching. It doesn’t look like it, because they scored 10 on us, but we had quite a few errors (five) and that’s when they scored a lot of the runs,” Greene said. “She’s been great for us this year.”

Kayla Kruse added a single and crossed the plate once for Patrick Henry.

“We competed with Bryan for seven innings, which is a big step for us because we had nine with us tonight,” Greene said. “It was a small victory.”

In the second game against Montpelier, Arnold got the complete-game win in the circle. She fired 14 strikeouts, allowed one hit and one walk. Arnold also singled twice and drove in one run.

Vreeland and Jasmine Richter each drove in a run, while Voigt crossed the plate twice. Bryan totaled four hits and committed one error, while the Locomotives committed three errors.