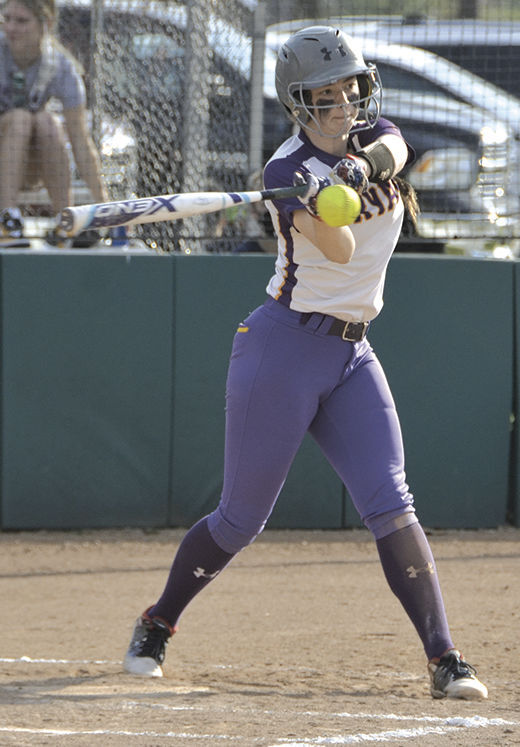 Bryan’s Scout Smith hits a pitch from Napoleon’s Spencer Schwaiger during Tuesday’s nonleague softball game at Recreation Park. Smith got a single on the play. 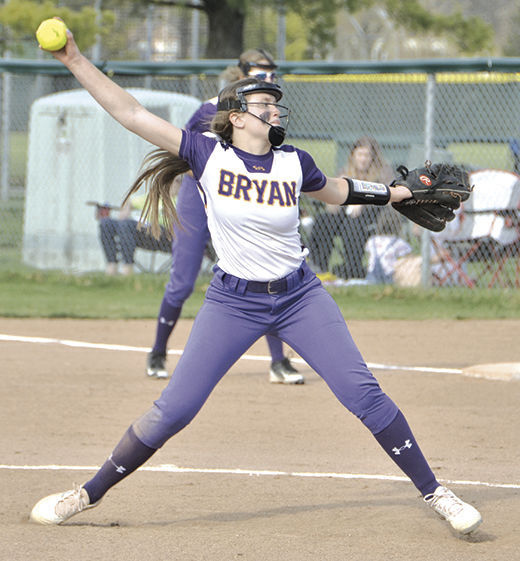 Bryan’s Scout Smith hits a pitch from Napoleon’s Spencer Schwaiger during Tuesday’s nonleague softball game at Recreation Park. Smith got a single on the play.

Napoleon couldn’t figure out how to stop Bryan’s bats and Addie Arnold’s pitching.

Arnold took a no-hitter into the fifth inning, while the Golden Bears offense scored 11 runs on 12 hits in five frames to get an 11-1 run-rule nonleague softball victory on Tuesday in Recreation Park.

“Six-0 sounds awesome to start, especially with (this) my first season. That’s amazing,” Bryan coach Samantha Fowls said. “These girls are really coming out and playing hard every single game, and as a coach you can’t ask for anything more than that.

Arnold, a junior, picked up her sixth win in the circle this season by striking out six, walking one and only allowing one earned run in her complete-game performance. She also went 1 of 3 with a double, walk, stolen base and two runs scored.

“She’s definitely kept every batter on their toes. She’s hitting her spots really well and definitely getting a mix of pitches in there,” Fowls said. “And we told her, ‘They’re bound to hit at some point, but we’ve got a great defense behind her.’ So just allowing the defense to do the work.

“... I don’t think she was even upset (about not getting a no-hitter). I don’t know if she knows, to be honest. She did a great job — she always does.”

Scout Smith fronted the Golden Bears’ offense by almost completing the cycle. The senior smashed two singles, an RBI double to secure the win and a 2-run triple in the fourth on 4-of-4 hitting. She also crossed the plate twice and had four total RBIs at the No. 3 spot in the lineup.

Kailee Thiel was also perfect from the plate, going 3 of 3 with two singles and a RBI double in the third frame and scoring once herself. Smith and Thiel each had a stolen base, while Bre Long added a 2-run double in the four-run first inning for Bryan.

“Give props to our freshman, Kailee. She finally came around,” Fowls said. “... (Smith) was out of town this weekend, so I think she was definitely ready to go when she came back. She didn’t skip a beat being gone and she always works hard.

“Strong, powerful kid. And she’s definitely been working hard on staying through the ball (and getting) line drives instead of popping up.”

Kaylee Hoover got the lone hit for Napoleon: a hard grounder up the middle in the fifth inning. Spencer Schwaiger walked once for the Wildcats’ only other baserunner and scored on an Anna Mack sacrifice fly in the second inning. She also had a stolen base.

Madison Shank picked up the loss in only 1/3 inning, allowing four earned runs, three hits and two walks in the bottom of the first. Schwaiger pitched the remainder of the game, allowing nine hits, seven runs, one walk and fanning six batters.

“We have a lot of improvement to make,” said Napoleon assistant coach Joel Espinoza, who subbed in for coach Kelsey Cowell on Tuesday. “It’s early in the season. I think with having to deal with COVID-19 last year, it’s been extremely tough on us. We’re a young team, not a whole lot of experienced varsity players.

“So we’ve just got to step up and move forward and build from this loss.”

The Wildcats will look to bounce back in a nonleague contest against Toledo Notre Dame at 11 a.m. Saturday at Napoleon High School.

“We’re just going to keep going with some mental stuff. That’s mainly our errors sometimes, just the mental game,” Fowls said. “... Just keep them going, keep them excited to get back on the field.

“I hope we can keep this rolling into Monday. I don’t think the break will hurt us as long as we keep practicing.”