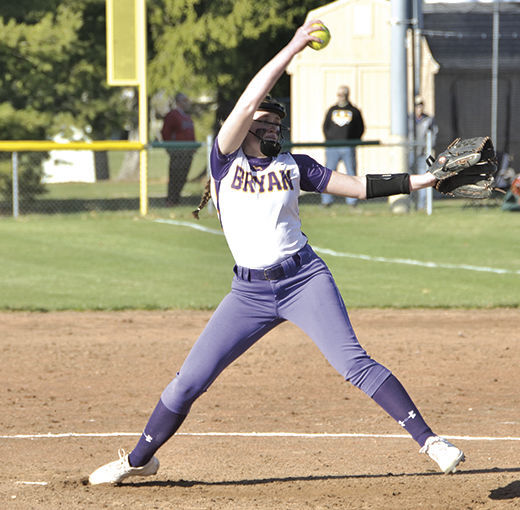 Bryan’s Addie Arnold winds up for a pitch during Monday’s nonleague softball game against Fairview at Recreation Park. 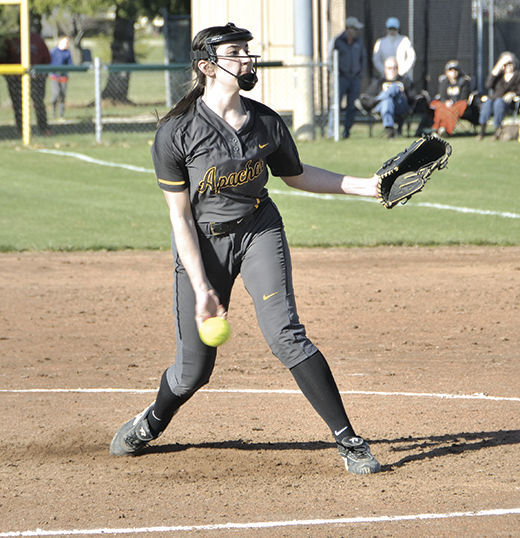 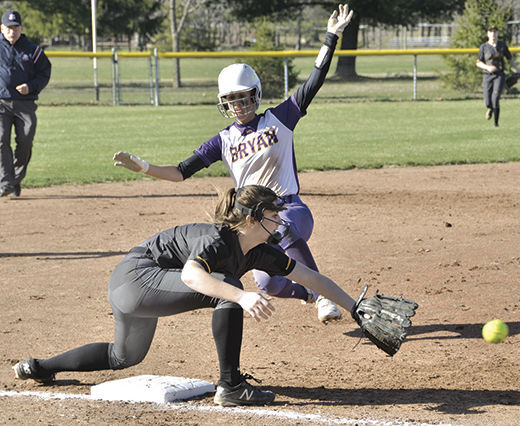 Bryan’s Bre Long (behind) slides into third base trying to steal it while Fairview’s Kiersten Cline receives a throw during Monday’s nonleague softball game at Recreation Park. Long stole the base.

Bryan’s Addie Arnold winds up for a pitch during Monday’s nonleague softball game against Fairview at Recreation Park.

Bryan’s Bre Long (behind) slides into third base trying to steal it while Fairview’s Kiersten Cline receives a throw during Monday’s nonleague softball game at Recreation Park. Long stole the base.

Bryan’s Addie Arnold said Fairview — which had a program-high 22 wins in 2019 — might be one of the best lineups she faces all year.

And the junior almost shut the Apaches out.

Arnold pitched a complete game, struck out eight, allowed only six hits and one run to 30 batters and helped Bryan beat Fairview 3-1 in a nonleague softball game on Monday at Recreation Park.

“I played with a lot of those girls for a very long time in travel (ball), so it felt pretty good to beat them because I knew it was going to be a hard one,” said Arnold, who also had an RBI. “That’s probably one of the best hitting lineups I’ll see all year.

“So it felt really nice, actually,” Arnold added with a laugh.

This was Arnold’s second win of the season after only allowing one run in a 13-1 win against Maumee in the season opener on Saturday.

“A few of my pitches are working really well right now and I just keep flowing with it,” Arnold said. “Just going with the flow, really.”

While the Golden Bears (2-0) only mustered two hits against Fairview’s Paige Ricica, they took advantage of the Apaches’ (0-1) errors.

Down 1-0 in the bottom of the second inning, Bryan’s Bre Long hit a single and stole second and third before a throwing error on an Ella Voigt hit to second base brought her in to make it 1-1 after two.

Voigt led the fifth off with a single and eventually crossed home plate on a passed ball to make it 2-1 Bryan. After reaching first via Fairview’s second error of the game, Kailee Thiel rounded the bases to make it 3-1 thanks to an Arnold groundout.

“We keep track of ... free bases and we gave up five and they gave up I want to say eight or nine,” Bryan coach Samantha Fowls said. “So just for us to take advantage of those every single time they’re giving it to us really helps us extend our lead and obviously get runners around in place so they can get in scoring position.

“So we’ve just got to make sure we’re taking advantage of those, which we’re working on in practice.”

Not only was Arnold dealing, but Ricica was too. In addition to only allowing two hits, the sophomore fanned seven batters, only walked one and allowed three runs, with zero of them being earned.

She also tried to support her efforts on the mound by going 2 for 3 with two singles, in the fourth and sixth innings.

Kiersten Cline brought in the only run for the Apaches, thanks to a throwing error that allowed Anna Ankney to score from third base in the first inning, giving Fairview a 1-0 lead.

Ankney fronted the Fairview offense at the leadoff spot, going 2 of 3 with two singles and a walk. Cline finished 1 of 4 with her lone hit a fifth-inning single, while Olivia Ricica, Paige’s sister, had a fourth-inning single in three overall at-bats to round out the Apaches’ offense.

“(Fairview is) definitely a strong team, a talented team,” Fowls said. “They’ve got six seniors coming out strong out of the gates.

“So to show that we could step up and get that win showed that we played really well and we got a good team ourselves — which I knew.”

Monday’s win was the second game of the Golden Bears’ three-game home stretch, which they’ll finish against Paulding (1-0) at 5 p.m. today.

“I think the girls appreciate our home atmosphere a little bit better. They’re used to playing on this field — we practice here — and it’s just the home environment of being here in Bryan,” Fowls said. “We always have a good fan base, so I definitely think that helps our overall environment and just the peppiness of it.

“It makes us comfortable so then when we go to an away game, we’re ready to go.”