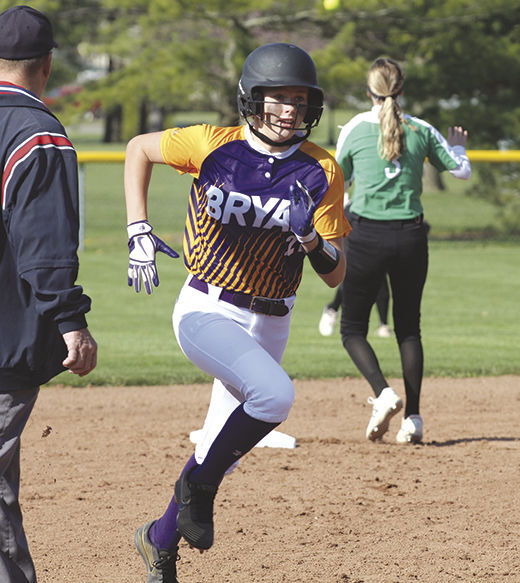 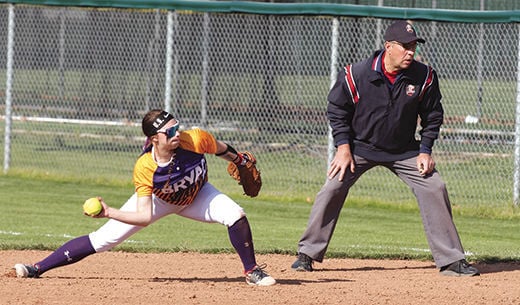 Bryan second baseman Scout Smith (left) throws the ball to first base after fielding a grounder as the field umpire watches the play unfold during the Golden Bears’ Northwest Ohio Athletic League softball game on Friday at Recreation Park. 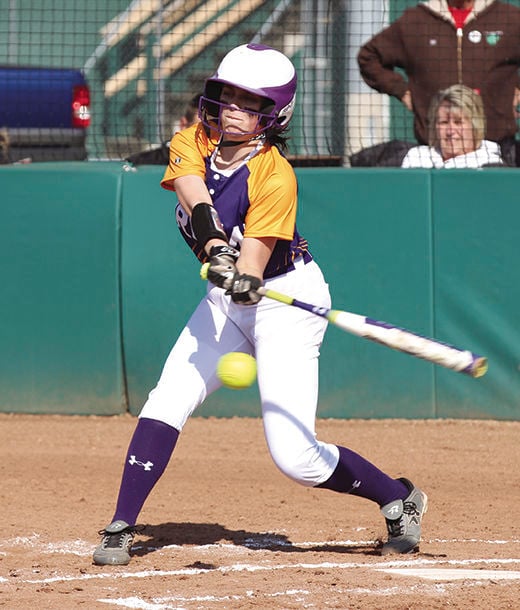 Bryan second baseman Scout Smith (left) throws the ball to first base after fielding a grounder as the field umpire watches the play unfold during the Golden Bears’ Northwest Ohio Athletic League softball game on Friday at Recreation Park.

Bryan’s softball team kept the “0” in the loss column intact on Friday.

Three Golden Bears’ pitchers combined to throw a five-inning no-hitter as Bryan jumped out to an early lead and cruised past Delta 13-0 in a Northwest Ohio Athletic League game at Recreation Park.

The Golden Bears racked up nine hits and took advantage of several early Panthers’ errors to take a 5-0 lead after the first inning. Bryan added six more runs in the second and two in the fourth.

In the circle, Addie Arnold earned the win after tallying five strikeouts in three innings pitched. Delilah Taylor and Alexandra Vreeland both pitched an inning of relief with one strikeout.

Offensively, three Bryan players tallied two hits apiece. Scout Smith slapped a triple and a single, drove in three runs and had two stolen bases, while Kailee Thiel doubled, singled, drove in a run and had a stolen base.

Taylor’s RBI hit in the first inning gave the Golden Bears a 1-0 lead. Smith drove in a run on a Delta fielding error and later scored on a Panthers’ miscue to make it 3-0.

Moore’s RBI single to right field scored Voigt, and Thiel scored on a passed ball as the lead quickly swelled to 5-0.

Smith roped a two-run triple to right field to make it 7-0 Bryan in the second inning, and the Golden Bears used nifty base running to extend the lead to 11-0. Smith and Vreeland both stole home on wild pitches, Thiel also scored on a passed ball and Tabithah Taylor stole second base and made it all the way around to score after the throw went into center field.

Karsyn Gillen took the loss for Delta after allowing five runs (none earned) in one inning pitched.

The Golden Bears will have a quick turnaround with a nonleague doubleheader at Lima Shawnee starting at 11 a.m. today. Bryan will have a key NWOAL game at Evergreen (4-0 NWOAL) on Monday.

The biggest key to keep the hot start going will be to take everything day by day, according to Fowls.

“It’s hard not to look into the future, like ‘Oh gosh, we could make a run in tournament,’ but I just have to keep reminding (myself) that’s far away still,” Fowls said. “A lot could happen before then, and 13-0 sounds great but all it takes is one loss to change our season or one game to change our season.

“So just staying focused, one (game) at a time and biggest thing is league games. Monday will be big again with Evergreen, I know they’re doing well too in the league... Just have to remain confident in ourselves and play our game.”