Bryan’s Lauren Wityk swims during an event at the Division II sectional swimming tournament on Saturday at Ayersville High School. 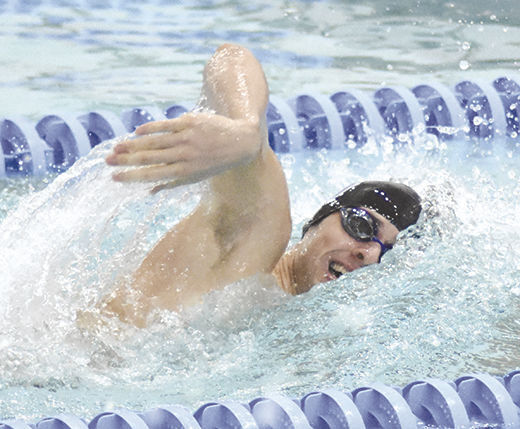 Bryan’s Lauren Wityk swims during an event at the Division II sectional swimming tournament on Saturday at Ayersville High School.

She will be hoping for another strong showing this week.

The Golden Bears’ swimming and diving teams will have more than a dozen athletes competing in the Division II district meet at Bowling Green State University.

“Our performance blew my mind,” Luce said. “I was expecting some good swims; We had incredibly good swims. We dropped, almost collectively as a team, almost three minutes in time off of our (top) times.

“It was incredible, just everywhere kids were dropping times and swimming well and doing things right that we’ve been talking about and working on all season.”

Three Bryan girls — Scout Smith, Paige Kunsman and Isabella Holbrook — will start things off for the Golden Bears today in the Division II district diving meet. The district swim portion will take place Friday, with Division II girls competing at 11 a.m. and the boys at 5 p.m.

The top two finishers in each district swimming event throughout Ohio, then the next 16 fastest times, qualify for next week’s OHSAA state tournament at C.T. Branin Natatorium in Canton. The top 10 divers from the Northwest District will earn a trip to state as well.

The Golden Bears posted numerous season-best performances on Saturday, especially the girls team as several relay teams and individuals swam to their top times of the year.

District qualifiers Maya Keil, Emilee Bassett, Addie Oberlin and Lauren Wityk teamed up to post a season-best 2:00.50 in the 200 yard medley relay; Oberlin, Katie Seaman, Keil and Wityk had the team’s top 200 freestyle relay mark (1:47.39); and the 400 freestyle relay team of Ava Moore, Allee Zigler, Seaman and Bassett had a 4:03.90.

“For any coach, I think this is your ultimate goal is to get your athletes to peak at this time so they know all their hard work, what it went towards and why they did it,” Luce said. “So I’m so proud of them that they stuck through everything, all the weird things that we had to deal with this year. They stayed the course and it paid off for them.”

Meanwhile, Bryan’s boys team will enter Friday’s meet with some of the best times from the six sectional sites in the Northwest District.

Rigg, Miller, Collin Barrow-Whetro and Ara Alyanakian teamed up for a season-best 1:43.84 in the 200 medley relay, which was the sixth-fastest sectional mark. The four swimmers had the fifth-fastest 200 freestyle relay time (1:33.49).

“Those boys work for it,” Luce said. “Sometimes, you run into athletes who are (just) talented or think they just get things, and not these boys. These boys, they put their effort into it and they work hard and they’ve earned their stripes.”

Rigg, who has won nearly all of his individual races this season, has ran into a juggernaut in Napoleon’s Kyle Hudson. The Wildcats’ junior beat Rigg in a meet-record 1:43.89 to win the 200 freestyle sectional title. Hudson also posted a meet record in winning the 100 freestyle in 46.90.

“Whenever your athletes have a chance to race somebody at a high level, I get excited. Win, lose or draw, I do,” Luce said. “I just want them to go out there, give what they have and see who they are and grow as a person.

Also competing at districts for Bryan’s girls team will be Wityk and Keil in the 200 individual medley; Oberlin in the 50 freestyle; and Seaman and Oberlin in the 100 butterfly.

The biggest key for Bryan will be to stay relaxed, according to Luce.

“We’ve done the work,” Luce said, “and now, let’s just go have some fun and stay relaxed and perform.”