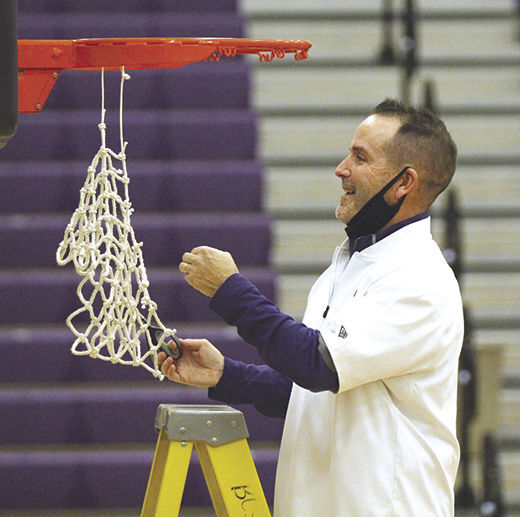 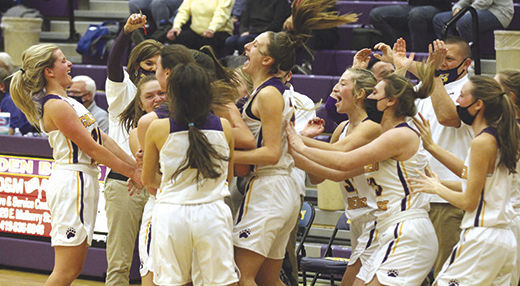 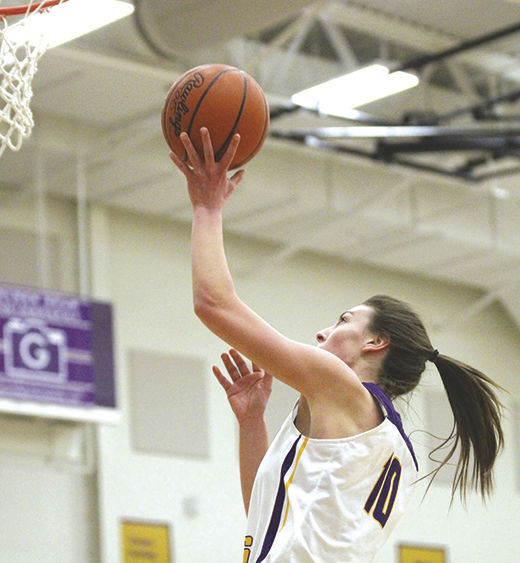 The five seniors on Bryan’s girls basketball team got a rare opportunity Saturday of having the final home game of their careers be an OHSAA tournament contest.

The Golden Bears certainly made it memorable.

Bryan’s seniors combined to score 36 points, with 6-foot wing Shallyn Miley posting a 13-point, 12-rebound double-double, as the Golden Bears avenged a regular-season loss to St. Marys Memorial with a 48-36 victory over the Roughriders in a Division II sectional final at Bryan High School.

The Golden Bears earned their first sectional championship since 2012 and fourth overall in the last 14 seasons.

“It’s really special. These seniors, they didn’t want it to end, especially on our home court,” Bryan coach Todd Grosjean said. “We didn’t play particularly well back in January when we played St. Marys (46-39 loss on Jan. 23 at Bryan).

“That’s a really good basketball team, they’ve got so many weapons ... They made a few runs at us, but I thought our kids did a really nice job of holding court and not panicking. We had a few turnovers that were unforced, but for the most part we played pretty well, defensively especially.”

Bryan, the No. 3 seed in the Paulding District, won its seventh straight game since its setback to the Roughriders in improving to 18-3. The Golden Bears advanced to take on No. 2-seed Lima Bath (22-2), the sixth-ranked team in the final Division II Ohio Associated Press poll, at 7:30 p.m. Thursday at Paulding High School. Bath upended Toledo Rogers 67-36 in a sectional final Saturday.

Bryan’s defense clamped down in the final three quarters. After the Golden Bears took a 14-11 lead after the first quarter, the Roughriders scored just 11 points over the next two frames as Bryan took a 33-22 lead into the fourth.

It was a stark contrast to the regular-season matchup when St. Marys Memorial used big finishes at the end of each quarter, shot the ball well from the floor (39%) and free-throw line (67%) and held Bryan to a season-low scoring output on 25% shooting.

“We knew that they were going to come out really aggressive and want it a lot, so we just kept that in the back of our mind,” Miley said. “But we also knew when we played them in the beginning of the season, we didn’t perform very well so we knew that we had to bring it.”

Senior McKendry Semer added 10 points and seven rebounds, while classmate Brooke Lamberson had 10 points (eight in the second half) for Bryan.

Lamberson threw up a wild left-handed shot from the baseline that rimmed out as time expired in the third quarter, but she was fouled. Lamberson sank both free throws to cap off a 7-0 Bryan run to end the frame.

Senior Kloee Antigo collected a loose ball and found Miley on a backdoor cut for an easy bucket to open the fourth and give the Golden Bears a 35-22 lead, their biggest of the game. Lamberson scored on a tough drive, knocked down both ends of a 1-and-1 and drove in for a layup as the Golden Bears maintained a double-digit lead for nearly the rest of the game.

“It was really big,” Lamberson said of her free throws to end the third quarter. “Everybody was just cheering so loud and I didn’t expect (the foul), but I put them in and the crowd went wild so that was good.”

Noelle Ruane and Cora Rable both scored seven points to lead the Roughriders, while Kendall Dieringer chipped in six with a team-high five rebounds.

Slowing down Ruane and Dieringer was key for the Golden Bears as the duo combined for 27 points in the Roughriders’ regular season win over Bryan.

“We focused our attention on Dieringer and 15 (Ruane), and I thought Allie Zimmerman did a great job and Delilah (Taylor) did a great job guarding her and frustrating her,” Grosjean said. “... At halftime, we talked about we’ve got to keep the lane plugged because Dieringer wants to get in the lane and try to score on the move.

“We can close out on shooters, we can’t help and let her split and give up layups or fouls and put her on the free-throw line. So we made that adjustment and I thought our kids really did a nice job closing out on people.”

Zimmerman added eight points, including a rainmaker 3-pointer early in the second quarter and a key jumper in the fourth after Semer scrambled to get an offensive rebound. Taylor had four points, Antigo scored three and senior Bre Long had three rebounds in the third quarter.

“We work on breaking the press a lot in practice and that really helps throughout the game because we know that they’re pressuring a lot,” Lamberson said. “We had to keep our cool and just play through it.

“... Our team’s just very close this year and we’ve just put in the work to do it. We’re just all really excited and it’s just a great win.”