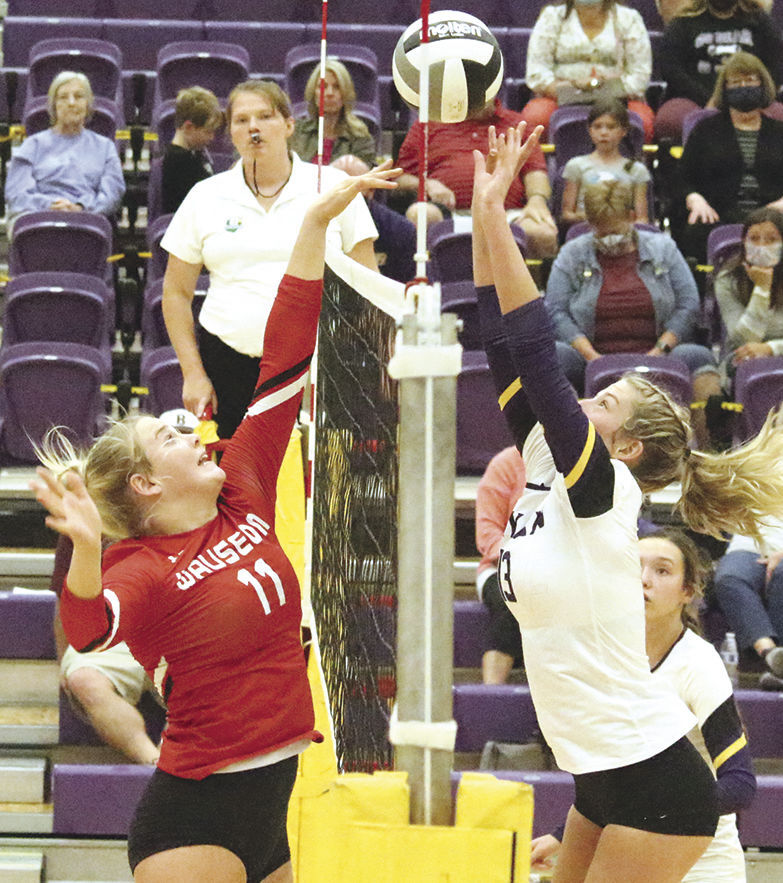 Bryan’s Jordan Beck sets the ball during the Golden Bears’ match against Wauseon on Tuesday.

Bryan’s Jordan Beck sets the ball during the Golden Bears’ match against Wauseon on Tuesday.

All it took was a little confidence for Bryan’s volleyball team to post its biggest win so far this season.

After dropping the first two sets in which the Golden Bears led nearly the entire way, Bryan finished strong in the third set and carried that momentum the rest of the way. The Golden Bears scored nine of the last 10 points in the fifth set to outlast the Indians 23-25, 25-27, 25-17, 25-12, 16-14 in a Northwest Ohio Athletic League match Tuesday at Bryan High School.

For the fourth time in the last five years, Bryan won its league matchup with Wauseon via five-set thrillers. The Golden Bears improved to 3-5 overall and 2-1 in the NWOAL, while Wauseon dropped to 4-5 overall and 1-2 in the league.

“We know it’s always a battle with Wauseon, it’s always a fun game,” Reinhart said. “This is exactly what happened last year, and it’s just a fun little rivalry and they’re so scrappy. But I think that our hitters came out in those last couple games and just had the mindset to kill the ball.”

The duo came up big in the fifth set when Wauseon was close to finishing off the Golden Bears.

After Wauseon’s Chelsie Raabe fired an ace to give the Indians a 13-7 lead, Semer responded with back-to-back kills. Fernihough’s kill after three straight Wauseon hitting errors tied the match at 13-13.

Hitting errors from both teams kept the match tied at 14-14, but Fernihough came through with a kill and a block to close out the comeback win.

“She did everything we’ve wanted her to do. We know that she’s capable of having that power swing, and she was on tonight,” Reinhart said of Fernihough. “She did a great job when she came in that front row to kind of take over the net.”

“it’s quite frustrating to know that it came down to our errors,” Wauseon coach Kelsey Wulf said. “I think we ended up having 34 or 35 attack errors, and you can’t do that. You can’t do that when you play a good team like Bryan.

“We’ve been competitive with every single team that we’ve played this year, and that has been our downfall, not being able to finish and not being able to close and putting the ball away and having that confidence on the court.”

Wauseon didn’t lead in the first set until a double hit from Bryan gave the Indians a 23-22 lead. Marisa Seiler had an ace and Raabe had a kill to close out the set.

Wauseon led 3-2 in the second set and didn’t lead again until Raabe’s ace gave her team a 26-25 lead. A spiking error from Bryan gave Wauseon a 2-0 lead.

“That momentum was huge and I really was hoping it would carry us into that third set,” Wulf said. “But honestly, I think we just kind of started to put it on cruise control. We started to coast. We were hoping that they would make more mistakes than what we were earning. That wasn’t going to happen.”

Bryan’s Paige Kunsman fired an ace for a 10-9 lead in the third set, and the Golden Bears never looked back. Gwen Spengler added a kill and Semer two kills as Bryan built a 13-9 lead.

Spengler, who had 18 digs and eight kills, served the first 11 points of the fourth set as Bryan bolted to an 11-0 lead. She had two aces, Semer had two kills and Fernihough added two blocks and a kill.

“The start to the fourth set gave us a big cushion. Me staying consistent serving, that was a big help but I feel like we couldn’t do it without defense and offense,” Spengler said. “My team really helped me.”

Three straight Wauseon miscues closed out the set and forced a deciding fifth set, where Wauseon took control early as Raabe had four kills to give Wauseon a 12-7 lead.

“In all honesty, we just said, we’ve been preaching to them over and over how to stay aggressive and if you’re aggressive, you are a really hard team to beat,” Reinhart said. “We weren’t aggressive in those first two games. We were just kind of going through the motions, kind of playing not to lose instead of playing to win.

“We challenged them that third game and the fourth game knowing they have the capability to do that. I thought they did a great job.”

Bryan will look for its third straight win on Monday when the Golden Bears travel to Maumee for a nonleague match.