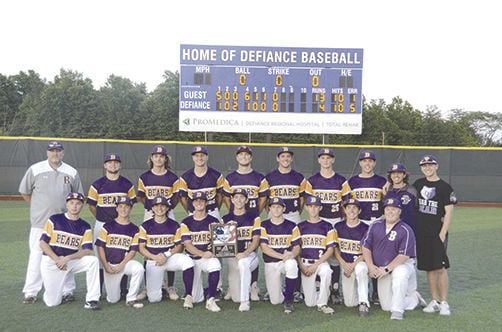 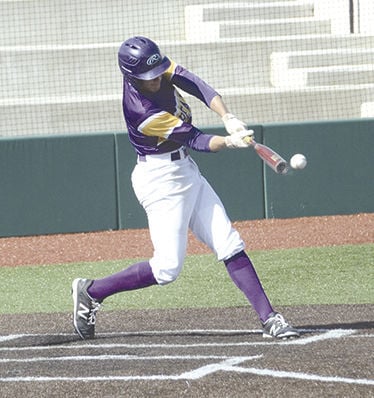 Bryan’s Benny Roebuck makes contact with a pitch in an ACME District game against Defiance on Monday at Defiance High School. ANDREW GILLIS/Staff 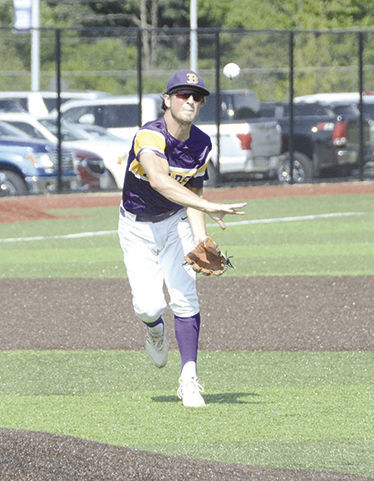 Bryan’s Benny Roebuck makes contact with a pitch in an ACME District game against Defiance on Monday at Defiance High School. ANDREW GILLIS/Staff

DEFIANCE — Early in Monday’s District 1 ACME baseball final against Defiance, Bryan found itself on the ropes.

The Golden Bears fell behind in the first inning of a must-win game and trailed heading into the third inning. A loss, and the season was over. A win, and there’d still be another game to play.

But Bryan rallied to score three runs in the third inning of the first game, which was all it needed in a 3-1 win. Then in the second game, Bryan didn’t waste any time falling behind in a 13-4 win to clinch a spot at the ACME State Tournament this weekend in Coldwater.

“We got the team to do it, there’s no doubt there,” Bryan coach Doug Williamson said. “The way they always compete, they’ve been down in a ton of games and they’ve always come back. I don’t worry when we get down because I know they have the ability to come back. They didn’t get down or anything like that, they came out and started chipping away.”

After the comeback win of game one, Bryan hung five runs on Defiance to open up the second, winner-take-all game. Suddenly, on a night when all of the pressure was on Bryan’s shoulders, the focus shifted to Defiance.

“After a win there’s always momentum, I think that win relieved some pressure and then it’s just one more game,” senior catcher Nate Miller said. “One more game and we’re back where we want to be.”

After the big inning in the first, the Bears followed that up with a six-run fourth inning, aided by an inside-the-park home run by Benny Roebuck. The inning extended the lead to 11-3 and effectively put the game away.

Roebuck, who got the start on the mound in game two, was a triple shy of the cycle and had five RBIs.

“That was just huge with him getting that inside-the-park’er, put the pressure on them a bit more,” Williamson said.

Logan Clemens had two RBIs, as Breven Deckrosh, Dom James and Noah Tressler each had an RBI as well.

The rest of the second game was mostly quiet, as Defiance could never get within striking distance. In the first game, however, the Golden Bears were never in the clear.

Defiance opened up a one run lead in the first inning off of two hits. But Trevor Ward settled down on the mound for Bryan and only allowed two hits the rest of the way as Bryan earned a two-run win.

“It’s a great way to end for the seniors as far as district wise, especially after a loss and going into the loser’s bracket,” Miller said. “Also helps us get momentum for our last state tournament. It’s a chance for us to prove ourselves, come back and make it back-to-back.”

Bryan will face either Mechanicsburg or West Liberty-Salem on Sunday at 5 p.m., where Williamson will take a special group of seniors into one final weekend of ACME baseball.

“I’ve coached for a lot of years, and they’re my favorite class by far,” Williamson said. “I always preach family to them and they’ve always been there for one another. They always fight for one another. You couldn’t ask for a better class than what I’ve got right now. I mean, these guys are the best.”