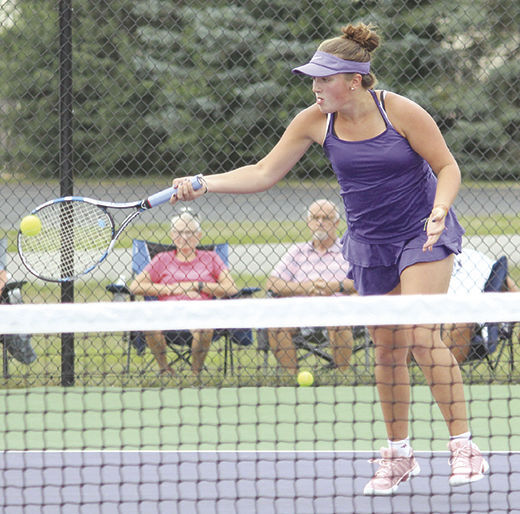 Bryan’s Emilee Bassett returns a shot in a match against Ottawa Hills on Sept. 1 at Bryan High School. 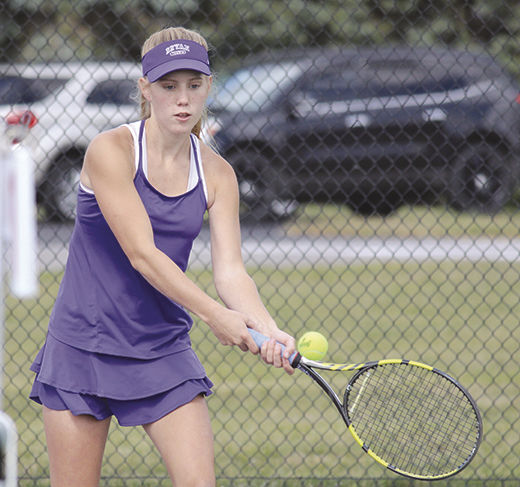 Bryan’s Reese Grothaus hits a shot during her No. 1 doubles match in the Northern Buckeye Tennis League Tournament on Oct. 2 at Bryan High School.

Bryan’s Emilee Bassett returns a shot in a match against Ottawa Hills on Sept. 1 at Bryan High School.

Bryan’s Reese Grothaus hits a shot during her No. 1 doubles match in the Northern Buckeye Tennis League Tournament on Oct. 2 at Bryan High School.

PORT CLINTON — For the first time in 12 years, Bryan High School will be represented in the OHSAA state girls tennis tournament.

Bryan junior Emilee Bassett and sophomore Reese Grothaus won both of their doubles matches Friday to punch their tickets to state on the first day of the Division II district tournament at Port Clinton High School.

Bassett and Grothaus became the first Bryan players since Meredith McDonagh in 2008 to achieve the feat. The Golden Bears’ duo also became the first state doubles qualifier from Bryan since Stephanie Gioia and Lynea Newcomer in 1997.

“For a rural school and a school that doesn’t have all the indoor courts during the winter, you sort of treasure these moments because we have that disadvantage of a program that has to make the most out of the summer months and the late spring months,” Bryan girls tennis coach Mitchell Owens said. “So it’s always gratifying when we are able to achieve something like this.

“Emilee and Reese are really excited about it. Of course for the program, it’ll do a lot for the program as people will take a little bit of notice here that we can put someone at state. Only 16 singles and 16 doubles teams get to go to state from the whole state of Ohio, so it’s quite an accomplishment and (I’m) really proud of how they played today.”

The top four singles players and top four doubles teams advanced to the Division II state tournament on Oct. 23-24 at Lindner Family Tennis Center in Mason. The district semifinals and finals for singles and doubles will begin at 10 a.m. today at Port Clinton.

Bassett and Grothaus, two of Bryan’s five district qualifiers, needed overtime in the opening set of their first match and a big comeback in the second match to pick up wins.

Bryan’s duo, the No. 3 seed from the Ottawa Hills sectional, knocked off Norwalk seniors and the No. 2 Port Clinton sectional seed Lauren Metcalf and Erin Bleile 7-6 (3), 6-3 in the opening round. Bassett and Grothaus overcame a tough first set in the second round to outlast Shelby juniors and the No. 1 Shelby sectional seed Grace Mahek and Anna Vogt 2-6, 7-6 (4), 6-2 to earn a trip to state.

“They had to battle like heck to make it happen,” Owens said. “They dropped the first set by a pretty good margin, 6-2, and for them to battle back and win that tiebreaker and send it to a third showed a lot of guts and determination.

“... The fact that we played probably one of the toughest schedules (during the regular season) we’ve played since I’ve been coaching, I think that helped tremendously that we have been in high-level, elite competition type of matches and have played those matches and have lost a few of those matches this year. But it prepared us for this moment, without a doubt.

Bryan district singles qualifier Kaitlyn Posey, the No. 4 seed, advanced to the second round after winning by default against No. 1 Elida Sectional seed Kunmi Ojo of Lima Shawnee. Ojo, a senior for the Indians, was quarantined through COVID-19 contact tracing and was not able to compete.

“I felt awful, she’s a senior,” Owens said. “I talked to some of the parents from Shawnee, talked to the coach and it’s just a very sad and I’m sure for them disappointing way to have to end your season and your high school career.

“... Kaitlyn got to play in that next round with the chance if she’d pull that out of going to state. I told her, I said, ‘We can’t control what happened in that first round,’ but it is a victory in that we know part of this whole season, all fall sports, you’re playing on the court but you’re also playing off the court. Bryan has done a good job with its coaches and preaching to the kids that part of competing is what you do when you’re not on the court or you’re not on the field and keeping yourself safe and all that from being quarantined.”

Posey, a junior for the Golden Bears, lost to Edison senior and the No. 2 Shelby sectional seed Jayla Medina 6-1, 6-3 in the second round to cap off her second straight district qualifying season. She reached the district doubles tournament with Bassett a year ago.

Bryan juniors and No. 4 seed Brooke Taylor and Haylee Wheeler, competing in their first district tournament, fell to Norwalk seniors and No. 1 Port Clinton seed Emma Trost and Alexa Moore 6-0, 7-5 (5) in the opening round.

“They picked up the intensity and they went out and in my mind they went out playing like winners, which is the way you want to go. You can’t change the score, but you can change how you play and they played so well in that second set,” Owens said of Taylor and Wheeler. “We were up 5-4 in that tiebreaker and just a few more bounces go our way and we’re in the third set there too, so really proud of those girls and all they’ve accomplished. They both had over 20 wins on the season and just two or three losses is all they had.”

Bassett and Grothaus will take on Lima Bath seniors Ruby and Esther Bolon in today’s district semifinals. Toledo Central Catholic’s Bella and Lucia Spinazze and Lima Shawnee’s Aria and Alora Patel will square off in another district semifinal.