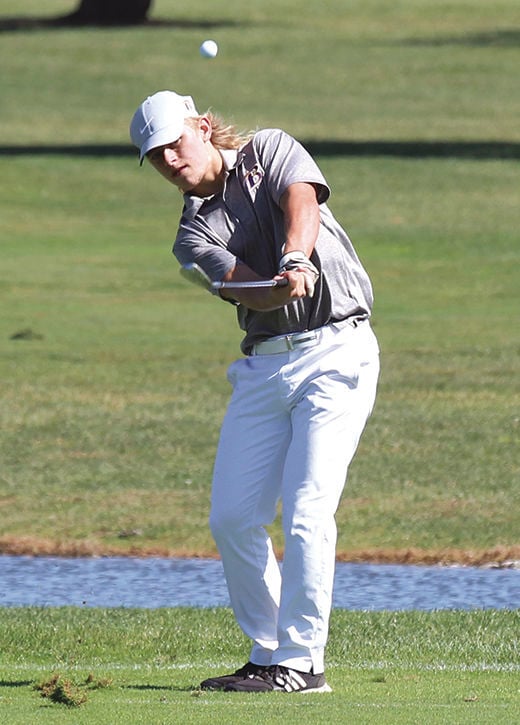 Bryan’s Carter Brown chips the ball on the par 4 No. 16 hole during the Northwest Ohio Athletic League Tournament on Sept. 24 at Auglaize Golf Club in Defiance. 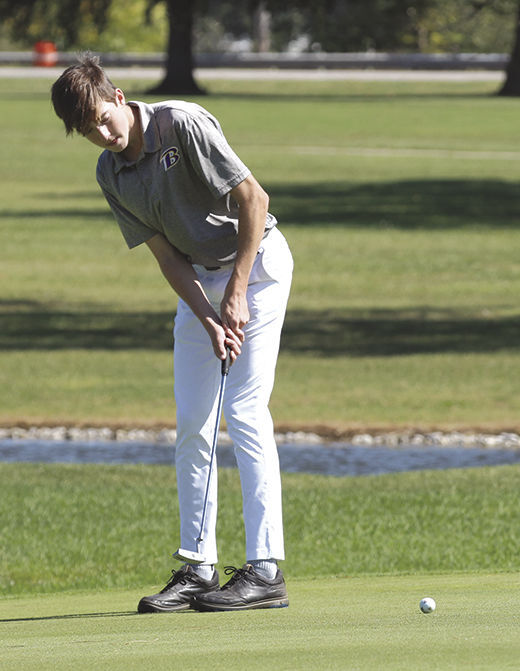 Bryan’s Nathan Hess putts the ball on the par 4 No. 16 hole during the Northwest Ohio Athletic League Tournament on Sept. 24 at Auglaize Golf Club in Defiance.

Bryan’s Carter Brown chips the ball on the par 4 No. 16 hole during the Northwest Ohio Athletic League Tournament on Sept. 24 at Auglaize Golf Club in Defiance.

Bryan’s Nathan Hess putts the ball on the par 4 No. 16 hole during the Northwest Ohio Athletic League Tournament on Sept. 24 at Auglaize Golf Club in Defiance.

Carter Brown and Nathan Hess have had an exhausting fall sports season. But the Bryan seniors still have plenty left in the tank for one last golf tournament on Ohio’s biggest stage.

Brown, who plays golf and football for the Golden Bears, and Hess, a key member of the golf and soccer teams, will tee it up at NorthStar Golf Club in Sunbury this weekend as Bryan competes in the OHSAA Division II state boys golf tournament.

Bryan, which is competing in its first state tournament since 2012 and 15th overall, will join 11 other teams and 12 individuals for the two-day event. The opening round will be Friday and the final round Saturday.

Brown and Hess have been key components of a Golden Bears’ golf team that has won the Northwest Ohio Athletic League title, Division II sectional championship and Division II district crown in the last three weeks.

Juggling two sports, school work and other activities has been an exciting challenge for them.

“It’s been a lot to balance so far with school work and soccer obviously, but it’s a lot of fun though,” Hess said.

Added Brown: “I have fun doing it. They’re both great sports and I love playing them both. It gets a little stressful at times, but I’ve dealt with that so it’s fine.”

Constant communication with coaches and Bryan athletic director Chad Savage has been key for Brown and Hess. Although they have to miss some practices and games in one sport to compete in the other, they have been able to make nearly every big event.

Brown’s 91 at the NWOAL tournament at Auglaize Golf Club on Sept. 24 helped the Golden Bears win with a 337 total. Later that day, he put on the pads to compete in Bryan’s football game at Patrick Henry.

Hess, meanwhile, fired an 82 at Catawba Island Club in Port Clinton in the Division II district tournament on Oct. 7. He made it back to Recreation Park in Bryan that night to play in the Golden Bears’ soccer match against Swanton.

Finding time to work on their golf game has been a struggle at different points throughout the season – Brown did not play in the practice round at Catawba Island Club before districts – but it has still helped the Golden Bears earn a state berth.

“I golf when I can, which isn’t very much but I guess it’s been enough because I’ve been playing decent,” Brown said.

“On the days I’ve missed, I’ve just kind of tried to do as much as I can and not overstress myself on the school work,” Hess said. “And then soccer, my coach (Luke Collins) is really lenient with all of that so it’s really nice.”

Hess will have to miss Bryan’s soccer matches against Pettisville on Thursday and Napoleon on Saturday.

Meanwhile, Brown’s hectic schedule this week includes going down with the golf team Thursday morning for a practice round at NorthStar. He will play in the opening round Friday morning and early afternoon – Bryan starts on hole No. 1 at 9:50 a.m. – and make the 150-mile trip with his parents back to Bryan to play in the Golden Bears’ NWOAL football game against Swanton at 7 p.m. at Golden Bear Stadium.

After the football game, Brown will head back to Sunbury to rest for Saturday’s final round.

“I’d be interested to see how many other schools have kids that have dual-sport athletes at the state level,” Bryan golf coach Todd Grosjean said. “That’s a credit to them and it takes a lot of discipline and balance.

“They’re both very good students in the classroom, they work really hard at school… It just says a lot about them and their families that they can balance all of this and still be focused and still contribute.”