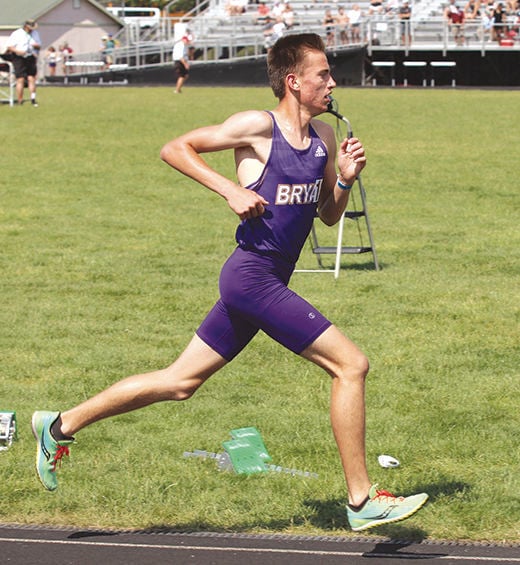 Bryan’s Joshuah Taylor runs in the 3,200 during the final day of the OHSAA Division II state track and field meet on Saturday at Pickerington North High School. 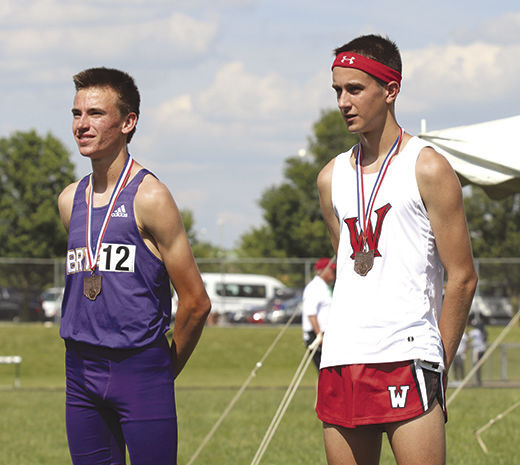 Bryan’s Joshuah Taylor (left) and Wauseon’s Braden Vernot smile after receiving medals for their all-Ohio finishes in the 3,200-meter run during the final day of the OHSAA Division II state track and field meet on Saturday at Pickerington North High School. Taylor finished sixth in the event, while Vernot was eighth.

Bryan’s Joshuah Taylor runs in the 3,200 during the final day of the OHSAA Division II state track and field meet on Saturday at Pickerington North High School.

Bryan’s Joshuah Taylor (left) and Wauseon’s Braden Vernot smile after receiving medals for their all-Ohio finishes in the 3,200-meter run during the final day of the OHSAA Division II state track and field meet on Saturday at Pickerington North High School. Taylor finished sixth in the event, while Vernot was eighth.

PICKERINGTON — Joshuah Taylor saved his best for Saturday, and it resulted in a pair of impressive all-Ohio finishes.

Bryan’s distance standout placed in the top eight in both of his events with personal-record times to cap off his junior year at the OHSAA Division II state track and field meet at Pickerington North High School.

“It’s very exciting. I couldn’t have asked for a better day,” Taylor said. “I was happy with the PR and definitely with the all-Ohio.

“I think today was just all mental. I think you had to come into the race expecting to PR and expecting to run fast to get that time, and that’s kind of what I did.”

“I think it was just getting out fast and just sticking with that front pack, trying to hang on as long as you can and just try to push yourself a little more,” Taylor said of the 1,600. “When you feel yourself getting gapped or slowing down, it kind of broke up into two races almost. I just tried to hang on and got the eighth place.”

Taylor admitted the 1,600 wore him out and he was dehydrated entering the 3,200 on a warm afternoon.

He started the 3,200 toward the back of the pack, but slowly worked his way up throughout the race. After the first of two miles, he moved up to around 10th place.

He gave it everything he had his final lap.

Taylor entered the last of eight laps in eighth place, but passed two runners entering the homestretch. He nearly caught a third athlete before finishing.

“I think mentally, it was tough to really run hard this race (the 3,200) but that last lap, I just knew I had a little bit more and I surprised myself, I think, catching a couple runners,” Taylor said. “In the middle of the race, I was probably sitting close to 11th or 12th through that last half of the mile. I knew that it was my last race and I really just had to put it all out.

“I think I just had to push through the thoughts going through my head that I’m falling behind. Once I got out in front of that group and I saw that lead group and I saw that a few were slowing down, I’m like ‘I have to get a couple of these to really secure that all-Ohio spot.’ So I think that’s exactly what I did and it was really fun.”

Saturday’s 3,200 marked the last race between Taylor and Braden Vernot. The Wauseon senior distance standout finished eighth in the 3,200 in 9:49.03.

The two athletes have had quite a competitive year racing against each other.

In track and field, Vernot nipped Taylor for the 3,200 title at the NWOAL Championships. But Taylor beat Vernot in the 1,600 for the league title and topped him in distance races in the Division II district and regional meets.

The two got to stand next to each other as they received medals for their finishes in the 3,200 on Saturday.

“I would always look forward to running with him and competing against him because he’s such a nice character and he’s a really competitive runner,” Taylor said. “It’s just fun to really have someone like that.

“I’m kind of sad to see him go, but then again, I think next year is going to be really fun just having that year where a lot of people are looking up to me and just giving it their all. I’m glad he definitely secured that eighth spot, I kind of got worried at the end, but I’m really happy for him and he did really well today.”