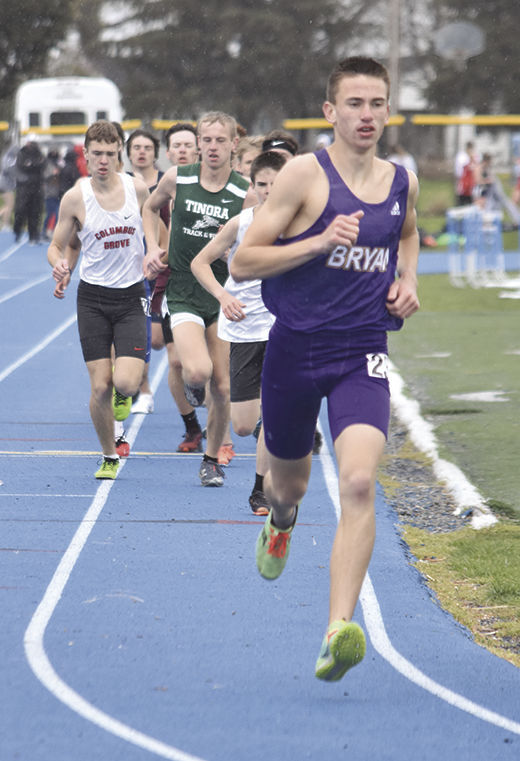 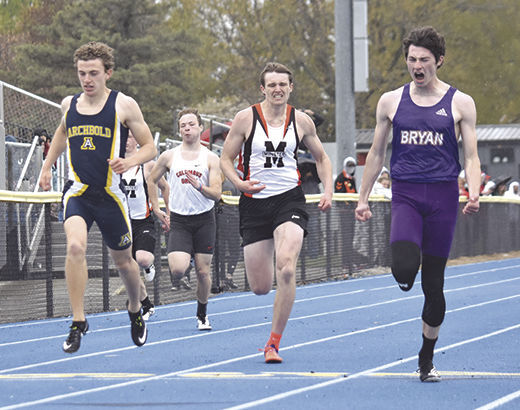 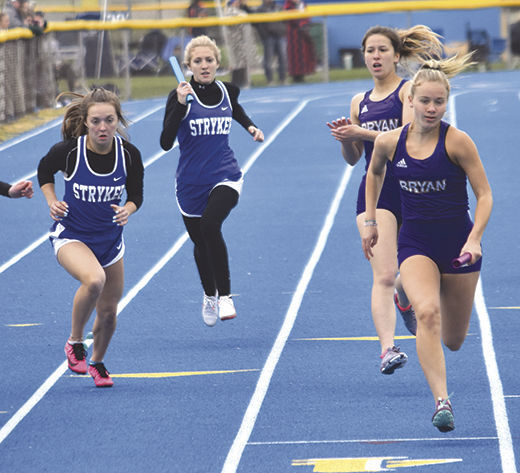 Bryan’s Allie Zimmerman (right) takes off after receiving the baton from teammate Montesa Vollmar (second from right), while Stryker’s Brianna Breier (second from left) gets ready to give the baton to teammate Sage Woolace during the 800-meter relay at Saturday’s Diller Invitational at Ayersville High School. 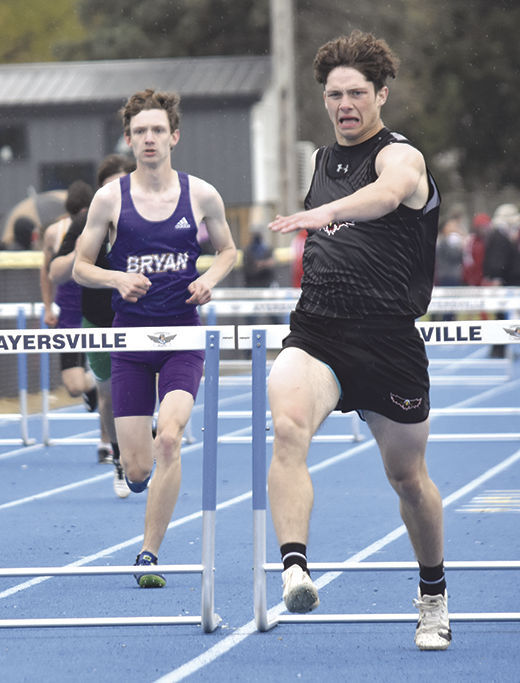 North Central’s Cameron Laney (right) lands after clearing a hurdle in front of Bryan’s Lucas Will during the 300-meter hurdles at Saturday’s Diller Invitational at Ayersville High School.

Bryan’s Allie Zimmerman (right) takes off after receiving the baton from teammate Montesa Vollmar (second from right), while Stryker’s Brianna Breier (second from left) gets ready to give the baton to teammate Sage Woolace during the 800-meter relay at Saturday’s Diller Invitational at Ayersville High School.

North Central’s Cameron Laney (right) lands after clearing a hurdle in front of Bryan’s Lucas Will during the 300-meter hurdles at Saturday’s Diller Invitational at Ayersville High School.

DEFIANCE — Joshuah Taylor has been putting up impressive times early in the 2021 track and field season.

The Bryan junior standout added a record-breaking one on Saturday.

Taylor set a meet record in winning the 3,200-meter run and picked up a victory in the 1,600 in leading the Golden Bears’ boys team to fourth at the loaded Diller Invitational at Ayersville High School.

“Josh had a really solid day. Just missed a PR in the 1,600 and then obviously set a PR in the 3,200 and meet record,” Bryan boys track coach Ken Ciolek said. “Just with the amount of volume that this meet has, it was good conditions for him to get a good time, even though he was running by himself for essentially the entire portion of the race.

“He’s been kind of just clicking the entire season, every week, just getting a little bit better. It’s going to be exciting to kind of see what he’ll be able to do when he gets to run against some of that (strong) competition that he’ll see at the district and regional meets.”

Bryan’s boys team finished with 60 points. Columbus Grove (first with 140.33) and Minster (second with 128.33) finished well ahead in the 20-team field, while Archbold was third with 65. Stryker and North Central’s boys teams also competed but did not score points.

The Golden Bears’ girls team finished ninth with 27, while Stryker was 12th with 13. North Central also competed but did not record any points.

“Josh has always had pretty good closing speed, and you can see that especially even during cross country and being able to close in the last mile,” Ciolek said of Taylor, who was a Division II all-Ohioan in cross country in the fall. “But with track, you could chase down a lot more. He’s definitely got a lot more to give and that’s where if he gets a chance to really go out and set a pace for somebody early on, that’s where you’re going to see an even faster last mile.

“It’s a good building progression, coach (Garret) Gleckler has got him really kind of dialed in right now. As long as he continues to follow that regimen and we get to see some nice weather, hopefully we’ll be able to see some even faster times coming towards later spring.”

“As the meet progressed, the weather kind of got a little bit worse. Early on in prelims, we actually had ideal weather,” Ciolek said. “It was a little colder, but no wind at all. But then the minute finals came along, they started running into a head wind.

“So (Potvin’s) 200 time in the finals was actually going into a pretty solid head wind and still was able to run a pretty solid time against a lot more competition than what we’ve seen in the past so far.”

Andrew Cogswell led the Golden Bears in the field events with a fourth-place finish in the long jump (18-11). Thomas Snyder placed sixth in the discus (124-7).

Ciolek said he was encouraged by Bryan’s performance considering several of their top athletes did not compete.

“While resting a lot of kids, we were only (five) points out of third place in this meet. Once we get back to full health and adding in someone like Quinn (Brown), who’s in baseball now but will be with us at conference championships, he’s another add to the relays and the open events that will definitely add a lot of depth and strength to our team,” Ciolek said. “So we’re building in the right directions, we’re starting to see a lot of good things and each of these meets, you can just kind of see that progression build and you can see confidence grow.”

Aquilina Cordic finished second in the 300 hurdles in 48.33, Wheeler was fourth in the long jump with a 15-0 and Lexi Alspaugh placed fourth in the shot put with a 34-10.5 for the Golden Bears.

Jakob Gaskill led Stryker’s boys team with a 12th-place finish in the discus (118-7).