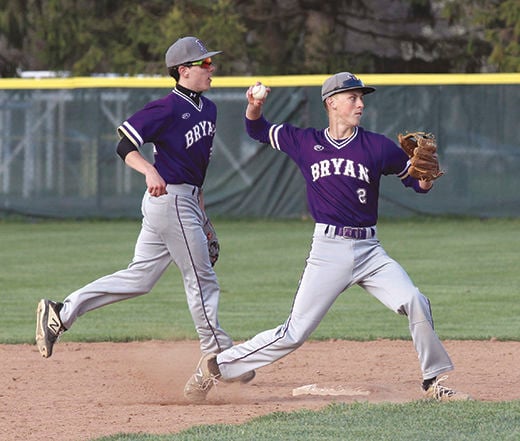 Bryan second baseman Clayton Rupp (right) throws to first base after getting the ball from shortstop Nolan Kidston during the Golden Bears’ Northwest Ohio Athletic League baseball game against Delta on Friday at Sumpter Field. Rupp’s throw to first base completed a 6-4-3 double play. 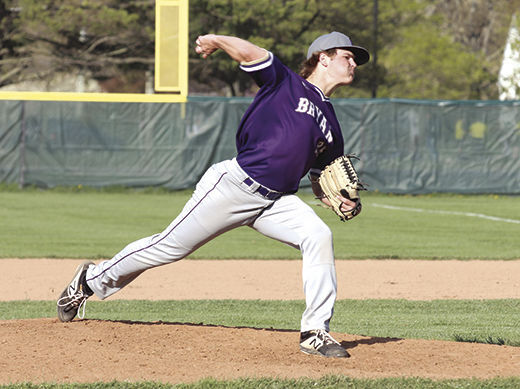 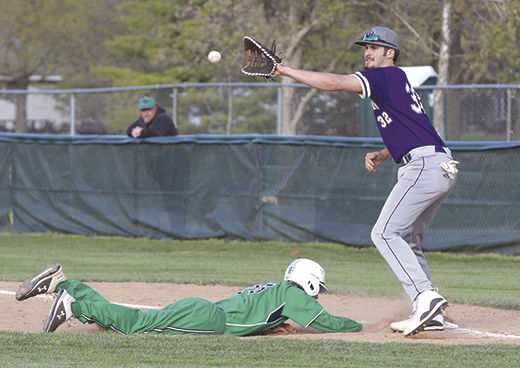 Bryan second baseman Clayton Rupp (right) throws to first base after getting the ball from shortstop Nolan Kidston during the Golden Bears’ Northwest Ohio Athletic League baseball game against Delta on Friday at Sumpter Field. Rupp’s throw to first base completed a 6-4-3 double play.

Breven Deckrosh and the rest of his Bryan teammates used a huge start and finish to earn a dominating win on Friday.

Deckrosh was a home run away from the cycle with four RBIs at the plate, tossed four innings of one-hit baseball on the mound and led the Golden Bears to a 13-0 five-inning victory over Delta in Northwest Ohio Athletic League play at Sumpter Field.

“That’s what we expect out of Breven, he’s our best player. We need him to swing the bat well, especially with runners on base,” Bryan coach Jeff Inselmann said. “It’s almost like we take him for granted at times; we expect him to get a hit every time and that’s not going to happen in baseball.

“But we need him driving in runs and he hit the ball with authority, and that was huge to see.”

Bryan (5-8, 3-1 NWOAL) remained near the top of the league standings with the victory. Wauseon is 4-0 in the NWOAL, while Evergreen is tied with Bryan at 3-1.

Solid play in all three areas of the game was key for Bryan.

The Golden Bears banged out 11 hits and scored six runs in the first inning, two in the second and third and five in the fourth. Deckrosh had seven strikeouts and allowed just one walk and one hit batter on 71 pitches, while Ethan Psurny pitched an inning of scoreless relief.

After Bryce Reeves singled to lead off the fifth for Delta, Psurny forced Kalvin Tenney to hit a hard ground ball to Nolan Kidston at shortstop. Kidston collected the ball and flipped it to second base to Clayton Rupp, who fired a throw to first baseman Titus Rohrer to get the double play.

“We mixed our lineup up a little bit. We’re tweaking some things defensively and kind of putting guys in some different spots, just trying to see if we can find the right mix and I was proud of our defense today,” Inselmann said. “It started with Breven throwing strikes for the most part, and Ethan got a good ground ball there, double play, but good to see out of Nolan and Clayton to turn that.

“Like we just told them; if we can field and throw the baseball and play clean baseball, we can play with anybody.”

Deckrosh smoked a bases-clearing double to deep left field in the fourth inning to give Bryan a 12-0 lead. Quinn Brown doubled to put runners on second and third, and Mikey Wolff hit a sacrifice fly to score Deckrosh and make it 13-0.

Brown also had an RBI single in the third to score Deckrosh, who smashed a two-out triple earlier in the frame.

Brown tallied three hits and an RBI, while Wolff had two hits and two RBIs. Taysen Deckrosh smacked two singles and drove in two runs, and Noah Huard singled and had an RBI.

Reeves had both hits for Delta (3-10, 0-4 NWOAL), which committed four errors. Jayce Helminiak took the loss on the mound after allowing six runs (one earned) on five hits in 2/3 inning.

The Golden Bears will face a big nonleague test today as they travel to Coldwater for a doubleheader beginning at 11 a.m. Bryan will hit the road Monday as well with an NWOAL tilt against Evergreen.

“We know we need some help (in the NWOAL), but the biggest thing is we’ve got to control what we can control,” Inselmann said. “If we’re not ready to go and we get beat again, it takes us out of the equation.

“We’ve got to do our job and then hope we can get some help and there are no guarantees there. But we’re trying to play better baseball, be more consistent and try to get this thing moving in the right direction before tournament hits.”