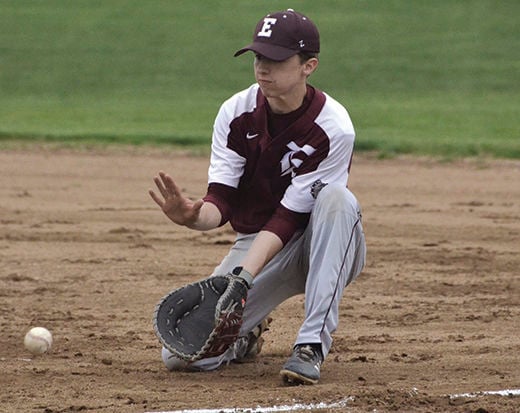 Edgerton’s Kale Merillat fields a grounder before stepping on first base for an out during Monday’s Green Meadows Conference baseball game against Hicksville at Hicksville Recreation Park. 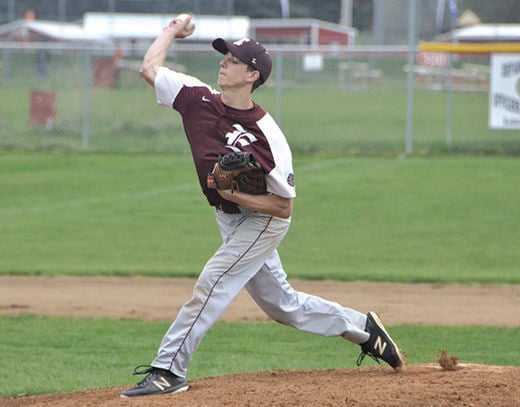 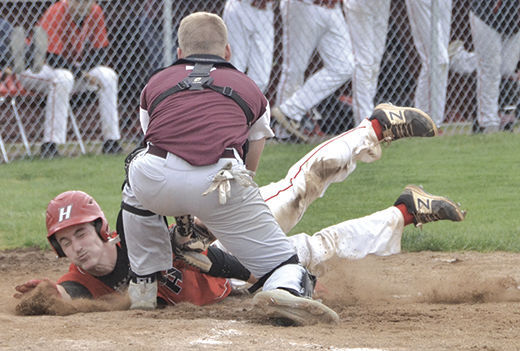 Edgerton’s Kale Merillat fields a grounder before stepping on first base for an out during Monday’s Green Meadows Conference baseball game against Hicksville at Hicksville Recreation Park.

HICKSVILLE — In the fourth, fifth and sixth innings, Edgerton’s baseball team had the bases loaded or runners in scoring position with one or zero outs, wanting to support Corey Everetts’ two-hit outing on the mound.

The Bulldogs, though, couldn’t back up Everetts.

“Corey Everetts pitched really well tonight, and he pitched well enough for us to win a game,” Edgerton coach Michael Gilliland said. “But the first inning, we booted the ball around and gave them a couple and stranded a lot of runners and couldn’t get that big hit to help us.”

The Bulldogs (8-12, 1-6 GMC) committed four errors in the bottom of the first inning, which allowed Hicksville’s Maverik Keesbury and Bergman to score the game’s lone runs for the Aces (6-12, 1-5).

“We’re usually on the other end,” Hicksville coach Tim Shock said. “It was nice to see us do that and jump out to an actual early lead (because) it seems like every game we’re playing from behind.”

In the second and third innings, Everetts and Bergman went to work.

In the fourth inning, however, the Bulldogs started to piece some at-bats together.

Gannon Ripke got hit by a pitch, Everetts laid down a bunt single and Warren Nichols was also hit by a pitch to load the bases with no outs.

Bergman pitched out of the jam with a strikeout, fielder’s choice to home and flyout to center field.

In the fifth, Edgerton’s Jordan Warner and Nathan Swank hit back-to-back line-drive singles to right field, and Ripke drew a walk in the next at-bat to load the bases with one out.

Again, Bergman got out of it. The junior righty fanned Everetts and got Nichols to flyout to right field.

Then in the sixth, Cole Meyer — who stole a base in the frame — and Kale Merillat both singled and advanced to third and second on a wild pitch with one out.

And once again, Bergman tamed the Bulldogs. He fanned Creed Muehlfeld and got payback on Warner with a strikeout.

“We gave ourselves the opportunity to score, but we didn’t come up with that one big play or one big hit,” Gilliland said. “I thought our guys did a good job of getting on base — we had some walks, hit by pitches and bunts for hits. That’s stuff you like to see.

“We just missed that one big hit that would’ve broke the game open for us.”

Everetts gave up a double to deep right-center to Nick Congleton and a line-drive single to right to Aaron Klima with one out in the bottom of the sixth for Hicksville’s two hits of the game. Unfortunately for the Aces, neither scored.

The sophomore righty also got three outs in three batters faced in the fourth and fifth innings, and only faced a maximum of four batters in every frame after the first.

Bergman finished the game in the seventh with a Swank groundout and strikeouts to Ripke and Everetts. He had 11 strikeouts, three walks, hit two batters and allowed five hits in 29 batters faced on the night.

“(Bergman) has thrown the ball well all year,” Shock said. “In those situations, we usually kick a ball around or something like that and give them cheap runs.

“We actually made a couple plays and then (Bergman) pitched himself out of it, so I was glad to see that.”

Everetts had five strikeouts, allowed zero walks and two runs (neither earned) in 24 batters faced, with the bunt single his lone hit.

Ripke finished with two walks and a hit by pitch, while Muehlfeld also walked once. Edgerton committed six errors on the evening, while Hicksville had zero.

“We settled down (defensively) and didn’t let that compound and compound to the point where we’re getting run off the field,” Gilliland said about his team committing only one error after the first inning. “It kept it a two-run game, and we were all the way in it until the end, which is all you can ask.”