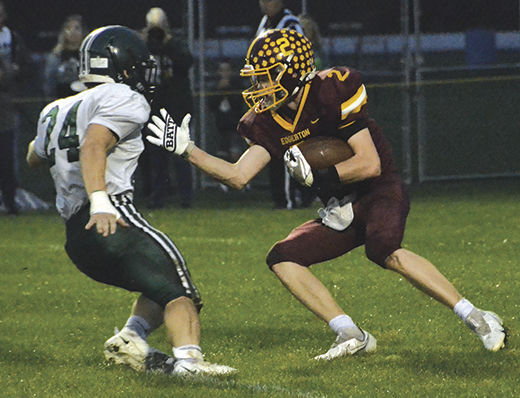 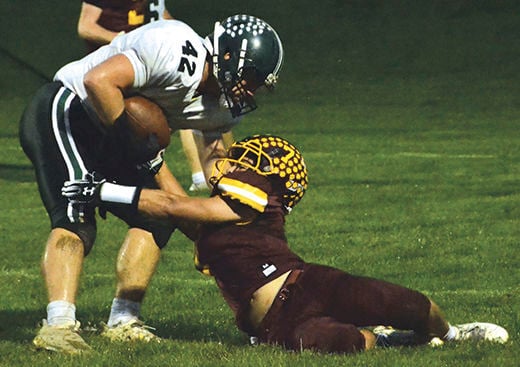 EDGERTON — Tinora’s football team dominated Edgerton on both sides of the line of scrimmage on Friday night.

The Rams limited the Bulldogs to 97 total offensive yards and recovered four lost fumbles, while running back K.P. Delarber ran for six touchdowns and 131 yards on 13 carries to lead an offensive outburst for a 54-8 Green Meadows Conference win at Stauffer Field in Edgerton.

“Tinora came to play and we didn’t come to play tonight,” Edgerton coach Brody Flegal said. “Hats off to them, they got after us all-around — especially up front. We’ve got to be better because we got another tough one next week (against Antwerp).”

Tinora got off to a fast start scoring three touchdowns in the first quarter to take a 20-0 lead. And early in the second quarter, Delarber scored his third touchdown of the night on a 8-yard run to start a 21-0 Rams second quarter and gave Tinora a 41-0 halftime lead. He also had touchdown runs of 3 and 5 yards in the frame.

“He’s been everything we can ask for,” Tinora coach Kenny Krouse said. “We’re going to need him down the stretch and through the playoffs. He’s just starting to find his niche right now. He’s got a lot in the tank.”

Delarber added a 40-yard score with 10:49 left in the third quarter — where the Bulldogs outscored the Rams 8-7 — while Cole Sweinhagen ran a 22-yarder with 1:15 left in the game. Tinora outscored Edgerton 6-0 in the fourth.

Corey Everetts went 5-of-13 passing for 57 yards and a 33-yard touchdown to wide receiver Kadyn Picillo with 3:23 left in the third quarter for the Bulldogs. The junior quarterback also ran 11 times for 18 yards and a 2-point conversion.

Picillo snagged two catches for 42 yards with his touchdown.

“We just got off to a good start,” Krouse said. “We got things goings, we’re starting to play really, really good football. Take nothing away from Edgerton.