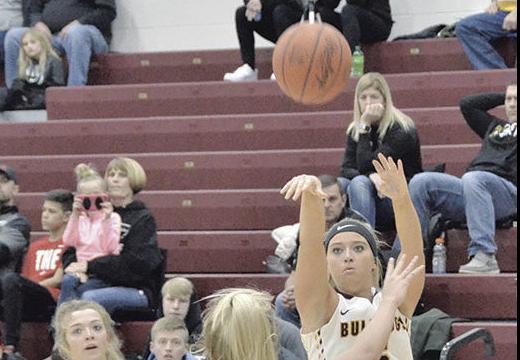 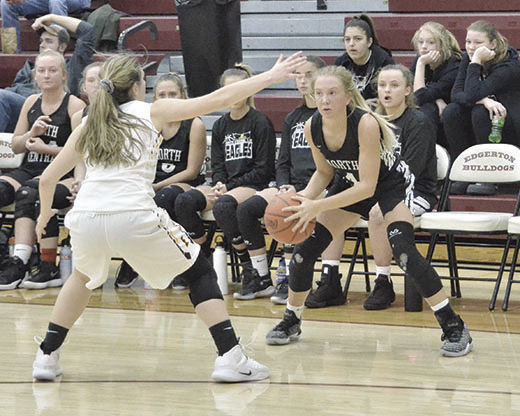 EDGERTON — A 20-7 third-quarter advantage for the Edgerton girls basketball team led the Bulldogs to coast to a 58-32 nonconference win over visiting North Central on Tuesday night.

“I thought our team played four quarters tonight, played hard from the start until the end,” Edgerton coach Nathan Davis said. “We played great defensively. A lot of our possessions on offense were caused by us playing hard defensively. Those offensive transitions got us a lot of easy layups. If you can play defense, it transitions to your offense.”

Edgerton shot the ball well from distance, sinking eight 3-pointers as a team, including four in the first quarter, three from Ally Cape and another from Casey Leppelmeier. Cape’s first and third triples bookended the opening frame, as she banked in a step-back 3-pointer at the first-quarter buzzer to give the Bulldogs a 16-8 advantage heading into the second period.

Davis said seeing those early deep balls go in was invaluable to the Bulldogs.

Edgerton started the second quarter on a 4-0 run, as a layup from Faith Herman forced a North Central timeout with the Eagles down 20-8 with 5:55 left in the half. The Bulldogs kept the Eagles at an arm’s length throughout the rest of the half, and a fast-break layup at the buzzer from Coral Picillo sent Edgerton into the intermission with a 27-13 lead.

North Central showed some fight in their full-court press defense to start the second half, as Kyleigh Westfall got steals on back-to-back possessions, resulting in three points for the Eagles. From that point though, Herman made two 3-pointers and Cape and Leppelmeier made one apiece to stretch the Bulldogs’ lead, and they took a commanding 47-20 advantage into the final quarter.

“When we start to run our lanes, it opens the floor up,” Davis said. “We have a point guard who can make those full-court passes, and we also have post players who can sprint the floor to get those layups. The floor opened up in that third quarter and gave us more opportunities to shoot closer shots.”

North Central outscored Edgerton 12-11 in the fourth quarter, but the game was out of reach by that point. Cape made her last free throw with about three minutes left in the game and exited with a game-high 21 points. Leppelmeier scored 12 points, and Herman finished with 10 points to round out the Bulldogs in double-digits.

Lauren Balser was the only North Central player in double-figures, as she made three of her team’s five 3-pointers to finish with 11 points.

Edgerton’s record bumps up to 3-10 on the year overall, including an 0-2 mark carried over from Green Meadows Conference play. The Bulldogs will look to carry some momentum into their next matchup when they travel to play Wayne Trace (10-3, 2-0) on Friday. North Central drops to 5-9, 4-4 in the Buckeye Border Conference, and will hit the road to face Montpelier (7-6, 5-3), also on Friday.