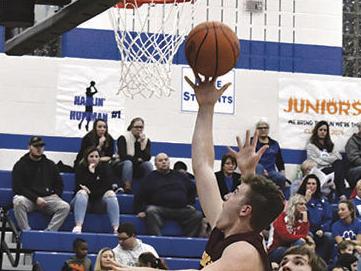 Edgerton’s Logan Showalter jumps for a layup during the Bulldogs’ 56-30 season-opening win over Stryker on Saturday night. GLYN BUNTAIN/Staff 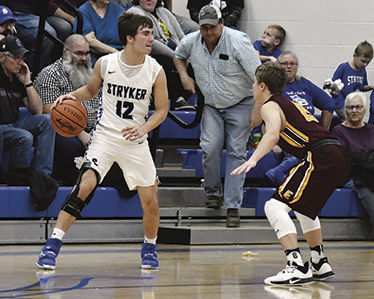 Stryker’s Payton Woolace sets up the offense during the Panthers’ 56-30 loss to Edgerton on Saturday night. GLYN BUNTAIN/Staff

Edgerton’s Logan Showalter jumps for a layup during the Bulldogs’ 56-30 season-opening win over Stryker on Saturday night. GLYN BUNTAIN/Staff

Stryker’s Payton Woolace sets up the offense during the Panthers’ 56-30 loss to Edgerton on Saturday night. GLYN BUNTAIN/Staff

STRYKER — The Edgerton boys basketball team shut out Stryker in the fourth quarter and was able to pull away and secure a 56-30 victory on Saturday night, the Bulldogs’ first victory of the 2019-20 season.

Edgerton (1-0) had a balanced first quarter scoring-wise, with six Bulldogs scoring baskets en route to a 13-4 advantage after the first frame. Stryker’s Kaleb Holsopple buried a 3-pointer from the left corner and also made a free throw, scoring all four of the Panthers’ first-quarter points.

Stryker (1-1) bounced back in the second quarter, though, outscoring Edgerton 14-12 to close the gap heading into halftime. Amos Sloan gave the Panthers a spark off the bench in the second quarter, sinking two close-range shots within a minute of each other. Stryker went on a 6-0 run in the last 1:13 to cut the deficit to 25-18 heading into halftime.

Stryker found its shooting stroke in the third quarter, as Spencer Clingaman made two 3-pointers and Holsopple made another. At the same time, though, Edgerton started to make its presence felt down low, as big men Logan Showalter and Noah Landel each had two buckets on the block, and the Bulldogs took a 42-30 lead into the final frame.

Stryker wouldn’t get another point from then on out. Landel, Showalter and Jaron Cape had four points apiece in the final frame to ensure a 56-30 win for Edgerton.

“I think we got tired,” Woolace said. “A lot of our guys played a long time without many breaks. I needed to sub better. They gave everything they could. Defensively, it wasn’t there in that fourth quarter, and that’s my fault. I’m a defensive coach. I teach the defense. I need to be better. I didn’t have these guys prepared for a team like this. We just need to get better, and we will. We’re still so inexperienced. This is game No. 2.”

Despite the positive result in the team’s first game of the season, Ripke still wants to see his team improve.

Edgerton has only had seven practices and one scrimmage with its full roster available following a deep playoff run from the football team, and Ripke wants that success to transfer over to basketball.

“It’s no excuse, but we’re still installing our offense and defense,” Ripke said. “Our kids have worked their tails off. They’re focused mentally. We’ve had a few of those long days where it’s a two-hour meeting and a two-hour practice, but that kind of comes with the territory. We truly believe that success breeds success, and we’re trying to roll some of that success into fall, not just from football, but from cross country as well, into winter and basketball season.”

Edgerton’s record now stands at 1-0 on the year, and the Bulldogs will look to keep that perfect streak to start the season going when they travel to face Archbold on Thursday. Stryker is now 1-1, including 1-0 in the Buckeye Border Conference after beating Hilltop on Friday. The Panthers return to BBC action by hosting Pettisville on Thursday.