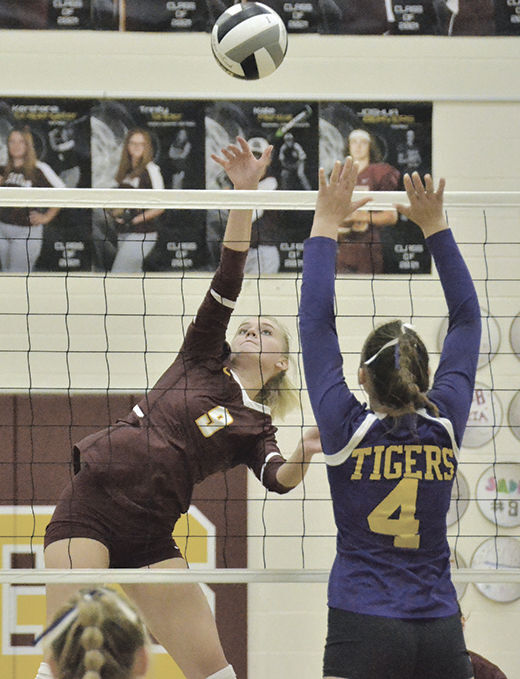 Edgerton’s Sadie Walther (9) spikes the ball against Holgate’s Carissa Meyer in the Bulldogs’ match against the Tigers on Tuesday at Edgerton High School. 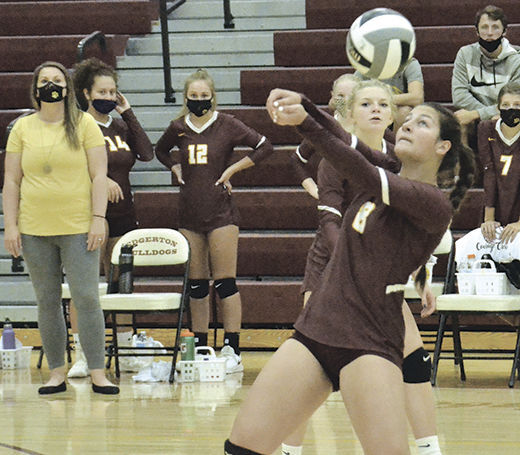 Edgerton’s Noelle Ritter (8) bumps the ball in the Bulldogs’ match against Holgate on Tuesday at Edgerton High School.

Edgerton’s Sadie Walther (9) spikes the ball against Holgate’s Carissa Meyer in the Bulldogs’ match against the Tigers on Tuesday at Edgerton High School.

Edgerton’s Noelle Ritter (8) bumps the ball in the Bulldogs’ match against Holgate on Tuesday at Edgerton High School.

EDGERTON — Edgerton volleyball was up 2-0 against Green Meadows Conference opponent Holgate going into the third set.

Which according to Bulldogs coach Samantha Lavin, is “a blessing and a curse.”

It started to look like a curse after Holgate started the third set with a 11-7 lead. But Edgerton turned what could have been a curse into a blessing, by fighting back to sweep the Tigers 25-17, 25-17, 25-23 on Tuesday at Edgerton High School.

“It was a good match for both teams to work on skills, to compete at the net more aggressively and I think we were able to do that a little bit more tonight,” Lavin said. “We were able to work on our side more tonight. There was a lot of out-of-system plays for both Holgate and ourselves, so I think we did play well out-of-system when we needed to.”

The Tigers’ momentum didn’t last long, though, after a kill from Edgerton junior Grace Schroeder sparked the Bulldogs to score eight out of the next nine points to make it 17-10. Edgerton kept the pace going for the rest of the set give it the 1-0 lead.

Unlike the first two sets, it was Holgate in control to start the third set.

The Tigers and Bulldogs traded point-for-point until the 6-6 mark, where Holgate was able to rattle off five of the next six points to get an 11-7 lead and force a Edgerton timeout.

“I wasn’t feeling very comfortable and we needed to break it down into basics to get the ball over and in, just be consistent and play very good defense on our side,” Lavin said. “We got a lot more touches, which I thought was advantageous for us... They were able to hit around us very well.

“But once we slowed things down on our side, we got a consistent pass and we were able to do a little bit better.”

The Bulldogs were able to go on a run and make it 13-13 following back-to-back kills from Ritter and Walther, forcing a Holgate timeout.

“Some of our go-to’s are Ritter and Walther, and I need them to get up and put the ball over and in — aggressively,” Lavin said. “And when we don’t do it as aggressively, that’s when you see things turn a little bit.”

Edgerton and Holgate kept it close for the entirety of the third set, with the largest lead for either team being two points.

Which Holgate coach Heather Finley was impressed with after down two sets.

“The fact they played hard, played aggressive and kept in the game that much in the third set, that just shows a lot about their character and how much they want to play,” Finley said.

The two teams eventually made it 22-22, with Edgerton taking a two-point lead to make it 24-22 and forcing Finley to use her last timeout. It wasn’t enough to win back the third set, however, as after scoring to make it a one-point game, a Holgate missed serve gave the Bulldogs the sweep.

“I’m just very thankful for how well the girls played, as far as being competitive,” Finley said. “I didn’t feel like they gave up. And I feel when you have a score that close in a third set, they’re staying in the game and trying to do their best.

“We had a lot of little dinks that we missed that we’ll obviously work on in practice tomorrow, but I thought we kind of got that going in the third set.”

The Bulldogs will look to stay over .500 against nonleague foe Evergreen (1-8) on Thursday at Evergreen High School.