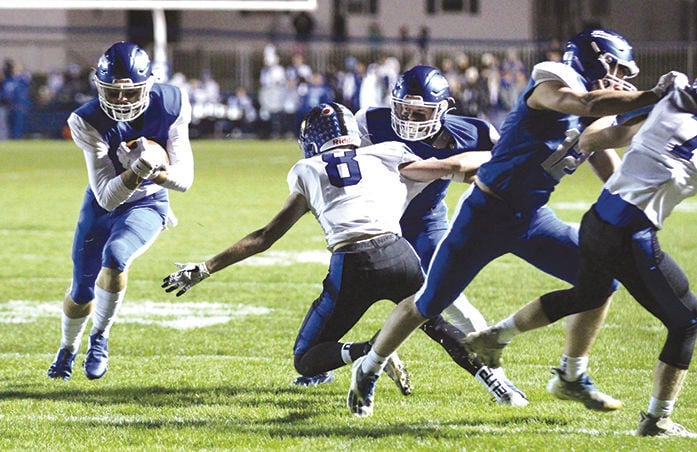 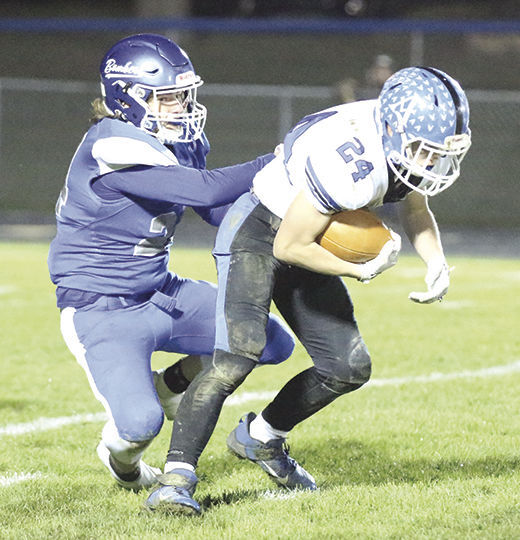 EDON — Edon’s football team will be playing in its first regional semifinal this weekend.

Lima Central Catholic, a 2020 Division VII state semifinalist, will be playing in its third in the last four seasons.

But even with the big advantage in playoff experience, LCC coach Scott Palte is expecting a battle from the Bombers.

“We have a few kids that played last year for us, had a good senior class last year but our juniors that played on our varsity, you hope that plays a part,” Palte said. “But (Edon) coach (Bob) Olwin’s been coaching a lot of years, so it’s not like he’s new to the experience. He’ll have his guys ready and he’s a really good coach. I’m sure their guys will be excited.”

Second-seeded Edon (11-1), which has had plenty of noteworthy moments and milestones during its best season in school history, will square off against No. 3 LCC (10-2) in an OHSAA Division VII, Region 26 semifinal at 7 p.m. Saturday at Donnell Stadium in Findlay.

Edon earned back-to-back playoff wins for the first time after edging No. 15 Spencerville 28-20 and No. 7 Antwerp 26-21 the last two weeks. The Bombers used a 9-yard touchdown run from senior wide receiver Gannon Ripke with 1:14 left to take the five-point lead and get the win over the Archers a week ago.

“It’s amazing to be able to have the community around us like this. Going this far is just spectacular and, obviously, we don’t want it to end,” Edon senior lineman Cassius Hulbert said. “We just want everything to fall into place and see how far we can get.”

Added senior running back/wide receiver Henley Dye: “It’s very exciting, especially because our school’s never done something like this. We have nothing to lose; We might as well just keep trying.”

LCC slipped past No. 14 Convoy Crestview 13-7 to open the postseason and cruised past No. 6 Upper Scioto Valley 47-14 last week.

The Thunderbirds are in the playoffs for the 14th time in the last 17 years (16th appearance overall, 17-15 record). The Bombers have made three straight postseason appearances (seven overall) and are 3-6.

Both teams feature explosive offenses, but LCC has had to make some big adjustments to continue its success.

After senior starting quarterback Evan Unruh (1,031 passing yards, 625 rushing yards, 23 total touchdowns) went out with an injury in LCC’s Week 7 win against Beverly Fort Frye, sophomore wide receiver Carson Parker (6-foot-2, 191 pounds) stepped in to fill the role. He has thrown for 857 yards, 10 touchdowns and four interceptions on 51-of-99 passing, and also has 698 yards and 11 touchdowns on 119 carries.

“We try to be balanced, try to keep teams honest and try to get the run established and build off it and get our play action game going,” Palte said. “We’ve got some guys that have made plays for us.”

The Bombers’ offense, meanwhile, has continued to utilize its weapons all over the field.

“By far the best passing team we’ve seen this year,” Palte said. “They do things really well, their quarterback’s super skilled. Big guy with a really strong arm and they’ve got a great collection of receivers that not only catch well, but they’re physical after the catch too.”