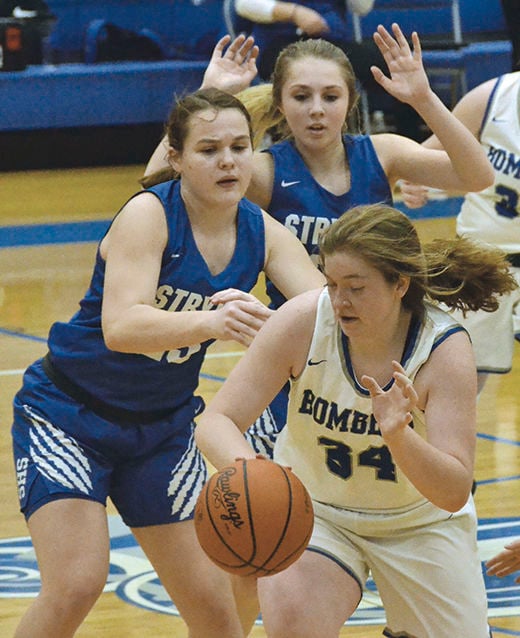 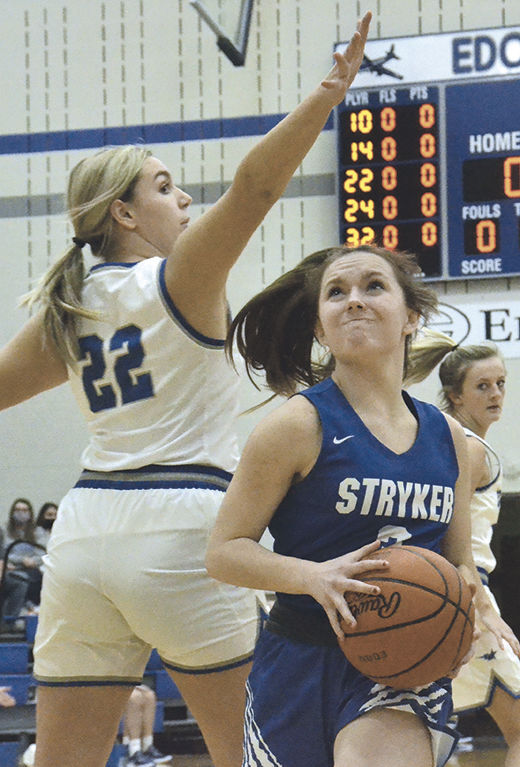 EDON — It wasn’t the smoothest second half, but Edon was able to edge out Stryker late after being behind for a majority of the game.

“It’s huge to have opening night here and protect our home court,” Edon coach Caela Walker said. “I thought our girls did a fantastic job of executing and finding a way to get it done.”

“We’re getting into a rush when we were beating the press, and thinking that we had to get a shot up right away,” Stryker coach Conner Varner said of the second half. “We just need to relax a little bit offensively.”

After being tied at 6-6 with 2:20 left in the first quarter, Allison Kaylor, who came off the bench in the first, made back-to-back 3-point plays within 44 seconds of each other to give the Bombers a 12-6 lead with 1:19 left. A Ramon 3 with 25 seconds to go slimmed Edon’s lead to 12-9 going into the second quarter.

In the second frame, however, the Panthers started heating up. They hit 6-of-13 shots, including 4 of 6 from 3-point range, for a 19-13 scoring advantage to take a 28-25 lead going into halftime. Woolace led the way for Stryker with eight points in the second quarter.

“We executed our plays a little bit better in that second quarter, and we had a little bit more energy,” Varner said.

While both teams went 2 of 11 from the field in the third quarter, Stryker was still able to keep its 3-point lead in leading 33-30 heading into the final frame.

But in the fourth, the Bombers started to hit their target.

Ashley Kaylor got it started by hitting a pair of free throws with 6:03 left to make it 33-32 Stryker, but a Kaitlyn Myers long-range 2-pointer 32 seconds later to make it 35-32.

Allison Kaylor, however, came to play. The 5-foot-6 junior center got her first of two fourth-quarter scores on a putback with 4:45 left to make it 35-34, and followed it up just over two minutes later with a layup to give Edon its first lead (36-35) since the beginning of the second quarter.

“I thought Alli came off the bench for us and did phenomenal,” Walker said. “I thought our entire bench (did too). We had tremendous bench play tonight, where every person that came in off the bench contributed.

“And I thought our bigs did a great job — and especially Alli. She was on the floor tonight, she had a lot of hustle plays, she had some offensive rebounds and stickbacks and and-ones. So I just thought she played hard.”

After Allison Kaylor’s layup, Edon controlled it the rest of the way with Towers’ mid-ranger with 1:05 left and Kiess hitting 3-of-6 free throws in the last 31.5 — with Woolace’s two free throws in that span as well — to give the Bombers the BBC win.

“I just think the entire team found a way to get it done,” Walker said. “They’ve been working really hard in practice. I’m so happy for them that they get to enjoy this win.

“And now we’ve got to get back at it tomorrow and prepare for Montpelier on Friday.”