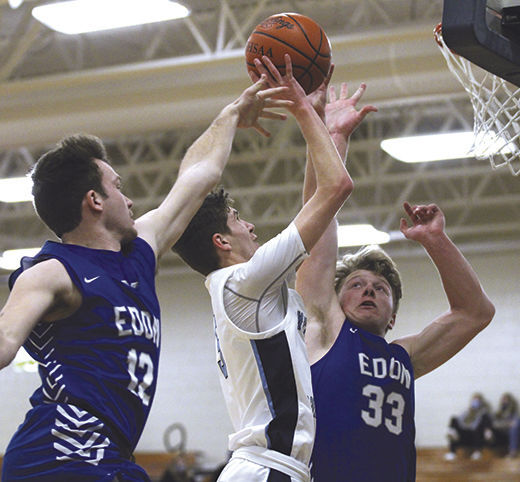 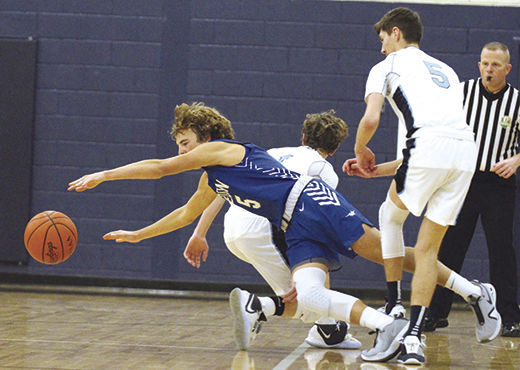 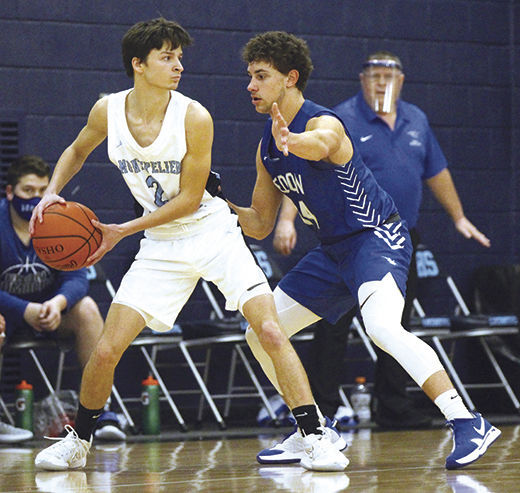 MONTPELIER — Edon’s boys basketball team totaled 61 points in a pair of losses earlier in the week.

The Bombers surpassed that output on Thursday with a season-high offensive outburst.

Edon shot a blistering 61 percent in the first half in taking a 44-24 lead over Montpelier, and the Bombers used their size and athleticism to dominate the paint and derail the Locomotives 62-47 in a Buckeye Border Conference game at Superior Athletic Complex in Montpelier.

Edon, which lost to Stryker 37-32 on Monday and to Pettisville 49-29 on Tuesday, improved to 3-3 overall and 3-2 in league play. Montpelier (6-2, 4-1 BBC) had its four-game winning streak snapped and suffered its first league loss.

The duo combined for 34 points in an efficient first half.

Gallehue scored nine points in the first quarter (eight in the paint) as the Bombers took a 17-9 lead. Gallehue found Hayden Dye for an easy score in the post to open the second quarter, and Berry drained a 3-pointer for a 22-9 Edon lead.

Gallehue’s 3-point play and Berry’s baseline drive for a score made it 27-11 Edon. Gallehue knocked down a short jumper and a 3-pointer later in the frame as the lead ballooned to 42-20.

Cassius Hulbert, another 6-3 junior for the Bombers, scored in the paint off Gallehue’s pass with 18 seconds left as Edon took a 20-point lead at the break.

“It was a huge mismatch,” Montpelier coach Justin Houk said of Edon’s size advantage. “They did a good job of getting (Gallehue) the ball and he scored in the paint.

“I thought we didn’t do a very good job of pressuring the guards and making them see. We made it easy on them to throw lobs in there and we talked about that before the game. The good news is we’ll get to see them again a few weeks from now.”

“I don’t think our offense clicked at all tonight. We got down, wide-open shots didn’t go in at the beginning,” Houk said. “We got down and we kind of hung our heads and played and felt sorry for ourselves, and that was really the name of the game.”

Gallehue and Berry added transition buckets early in the third quarter, and late in the frame, Gallehue dropped a perfect pass to a cutting Berry, who made a reverse layup to extend Edon’s lead to 54-32.

“He does all the little things,” Curry said of Gallehue. “He’s willing to pass the ball just as easily as score himself.”

Edon will return to the hardwood Jan. 22 when it hosts Stryker in a BBC game. Montpelier will travel to Edgerton for a nonleague game Saturday, then hosts Pettisville in a key BBC game Monday.

Pettisville (7-1, 5-0 BBC) is the lone unbeaten remaining in league play.

“We’re still sitting at a good spot where we want to be for winning the league title,” Houk said. “It was a setback, but can we learn from it and move on and I think we can as a team. We’ll learn from it and we’ve got a big game against Edgerton Saturday but then a bigger one Monday against Pettisville.”