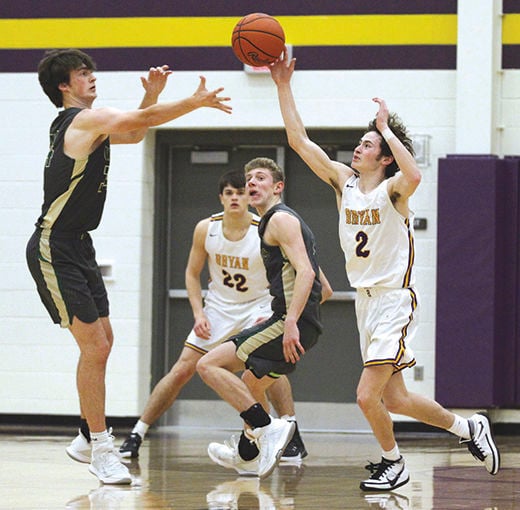 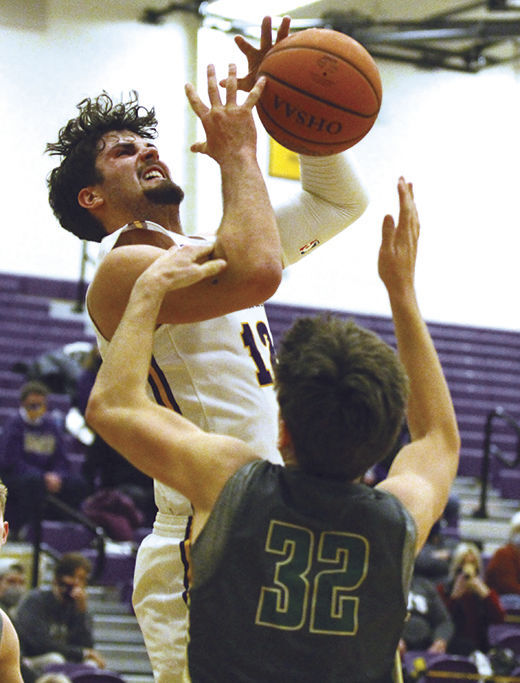 Bryan picked up the pace on offense in the second half of Friday’s game against Evergreen.

Unfortunately for the Golden Bears, so did the Vikings.

Evergreen, which scored just 22 points in a 45-point loss at Archbold on Feb. 5, nearly surpassed its season-high scoring output (64 points in a Dec. 12 win at Montpelier) in improving to 14-5 overall and 3-3 in the NWOAL.

Lumbrezer, a 6-foot-1 guard, scored a game-high 20 points and added seven rebounds to power the Vikings. Loeffler (6-5 forward) was right behind with 19 points and six rebounds.

The duo combined to score 22 of Evergreen’s 39 second-half points as the Vikings, who led 22-12 at halftime, maintained its double-digit lead for nearly the entire second half.

“Very pleased with it,” Evergreen coach Jerry Keifer said of the Vikings’ offense. “When (Bryan) went man — we’ve been working on something new getting ready for tournament — we were able to use it tonight and we got three or four easy two-footers.

“I was really excited about that and I just think after the Archbold game last week, we just decided that we are not a zone team and we spent the whole week on our man-to-man defense. I thought we were as good as we’ve been in a couple years. They’re very talented, Bryan, and they have a big kid that’s a load and I thought we did a really nice job on him.”

Titus Rohrer muscled his way to a 16-point, 10-rebound double-double to lead the Golden Bears. The 6-7 senior had 14 points in the second half.

Bryan sophomore Evan Cox added 12 points, including 4-of-4 free throws. He scored all six of Bryan’s points in the second quarter on tough, physical drives to the basket and added a score on a drive to the hoop late in the game.

“I thought Evan was much better, much more aggressive. I thought Titus played hard and had some tough situations down there,” Bryan coach Brandon Fisher said. “It was pretty physical.

“There were some other guys too that really played well. I think Canon (Lamberson) got better at attacking and I thought Keith Huard gave us some good minutes. It’s good to see him out there, he deserves that. He did a nice job boxing out and we need that, so there were a lot of positives.

“I thought A.J. (Martinez) got better at times. We need guys to step up and be able to run the offense and get people in a spot and early on, we couldn’t do that and we were already in a hole. Second half I thought we were finally aggressive attacking gaps, so hopefully that continues (today) because we’ve got another tough one.”

Braiden Showalter knocked down a 3-pointer in the fourth quarter for three points for the Golden Bears.

Hudik had 13 points, while Jake Fuller snatched 10 rebounds for Evergreen.

The Golden Bears made 67 percent (12 of 18) of their free throws, had a slim 30-29 rebounding advantage and committed 14 turnovers while forcing 12.

Bryan will have a quick turnaround with another tough opponent as the Golden Bears host Oregon Cardinal Stritch (10-4) today, The junior varsity contest is scheduled to begin at 11:30 a.m.