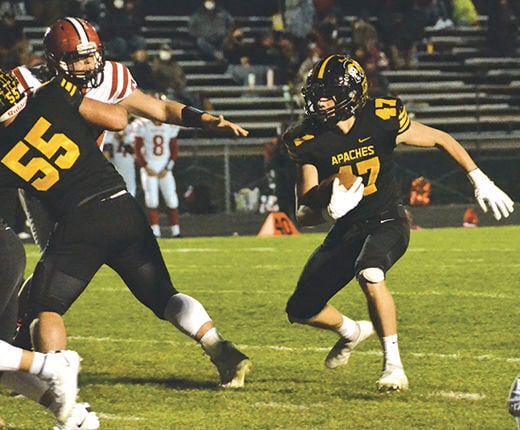 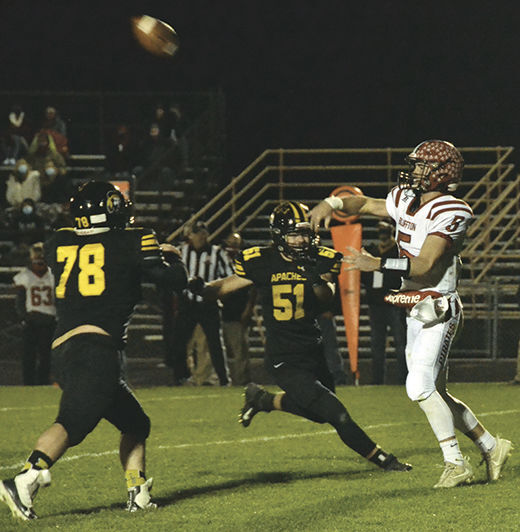 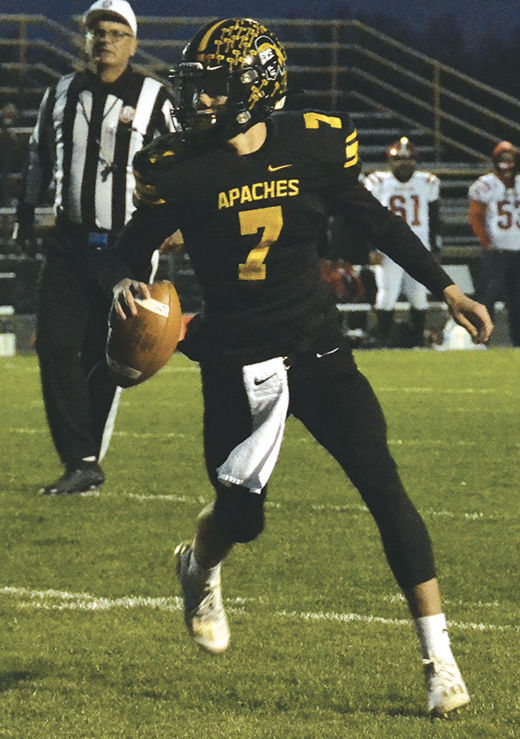 Fairview quarterback Doug Rakes Jr. scrambles out of the pocket against Bluffton during a Division VI, Region 22 second-round playoff game on Saturday at Fairview High School.

Fairview quarterback Doug Rakes Jr. scrambles out of the pocket against Bluffton during a Division VI, Region 22 second-round playoff game on Saturday at Fairview High School.

“I thought our guys performed tonight. They were up for the task,” Fairview football coach Doug Rakes said. “I had a lot of respect for Bluffton coming in, especially (running back Tyson Shutler) and (quarterback Nate Schaadt). I thought on film and watching them live last weekend, they were dynamic runners. (Shutler) had 261 yards rushing last week and (Schaadt) had almost 100.

“So it was a big task for us this week to work against their option looks — we knew we were going to have to be disciplined defensively. And I thought we did a really good job of that tonight and limiting those two.”

Bluffton (4-3) totaled 64 yards. The Pirates scored their lone touchdown on an 80-yard kick return by Shutler to end the third quarter.

“We were just physically dominated. We’re a very young team and Fairview is very experienced and a very good team,” Bluffton coach Jeff Richards said. “Up front, they handled us pretty well, however they wanted. Offensively,

they’re a very dynamic team. I think we helped them look even more dynamic at times with some miscues and some things like that.

“Their coaching staff has a great team and I think they’re going to go very far in the playoffs.”

It was not all smooth sailing for the Apaches to start the game, however.

After forcing a three-and-out, Fairview got to Bluffton’s 6-yard line. Rakes Jr. scrambled right for two yards, but fumbled the ball out of the end zone, resulting in a touchback.

That did not derail the 6-foot, 160-pound senior, though.

He led his team to score two touchdowns in the first quarter — two 1-yard runs by wide receiver Caleb Frank and Timbrook. Rakes Jr. then tossed a 6-yarder to Zeedyk to start the second quarter and a 36-yarder to Ripke, giving the Apaches a 28-0 lead with 6:58 left in the first half.

“For (Rakes Jr.), he’s a pretty even-keeled kid. I just said when he came off to the sideline, ‘Hey, when you’re in traffic, you got to cover that up with two hands,’” Doug Rakes said. “And he said, ‘I know, I know. It’s not going to happen again.’ He got over that pretty quickly and played pretty well the rest of the game.”

After Ripke’s touchdown catch, the 6-foot, 165-pound senior picked off Schaadt on the first play of the following drive and returned it 25 yards to give Fairview a 34-0 lead with 6:42 until halftime.

But Fairview was not done yet, as Timbrook made a highlight-reel 66-yard touchdown run, making jukes and stiff-arming Bluffton defenders, seemingly with ease. The 6-foot, 170-pound senior’s second touchdown of the game gave the Apaches a 41-0 lead they took into halftime.

The big play came after a 61-yard touchdown pass to Ripke was called back after Rakes Jr. stepped over the line of scrimmage when throwing.

It only took one play out after halftime for the Apaches to continue to score. Rakes Jr. tossed it to Zeedyk on a wide receiver screen and the 5-foot-11, 190-pound senior took it 60 yards to give Fairview a 48-0 lead with 11:18 left in the third quarter.

Rakes Jr. found Zeedyk again just under four minutes later, this time on a 2-yard out route. This gave the Apaches a 55-0 lead with 7:29 to go in the third.

“With us, we feel we have five really, really good receivers, and on some nights, it’s Caleb Frank — he’s our leading receiver on the season. On some nights it’s Cade Ripke, on other nights it’s Luke in the receiving game and we mix him in the running game,” Doug Rakes said. “And then some nights (wide receiver) Kaden Blair has some big plays for us. Tonight happened to be Russ’ night.

“The way that they were playing him and the thing we thought we could get with him were there. He made some nice catches and Doug threw some good balls to him away from coverage, which is good to see for us.”

Running back Keaton Singer ran in a 4-yard touchdown with 11 seconds in the third quarter, with Shutler’s kick return touchdown following suit and narrowing the lead to 61-6.

An 8-yard touchdown run by wide receiver D’Andre Hastings with 5:51 in the fourth quarter gave Fairview the eventual 67-6 final score.

Now, all Fairview’s attention is on Northwood and trying to advance to the Division VI, Region 22 semifinals.

“I know Northwood runs some option. They have some dynamic athletes,” Doug Rakes said. “I’ve seen a little bit of them online, and it’s going to be a tall order there to slow those guys down.

“But tonight I think was a good step (getting ready for Northwood), just because it’s a similar type of offense.”