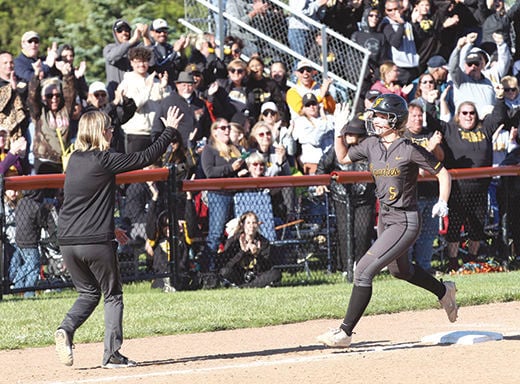 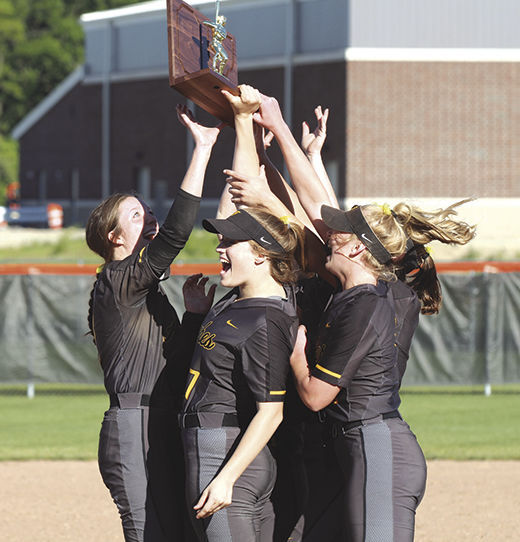 Members of Fairview’s softball team celebrate with the regional championship trophy after the Apaches beat Cardington-Lincoln in a Division III regional final on Saturday at Elida Middle School. 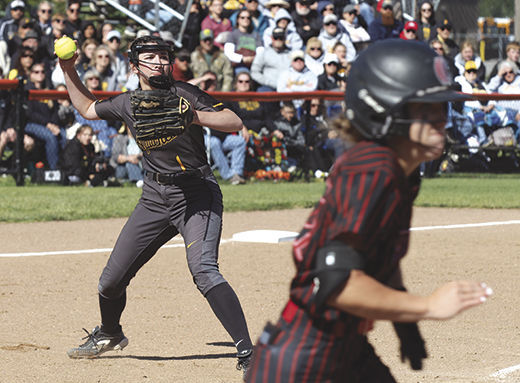 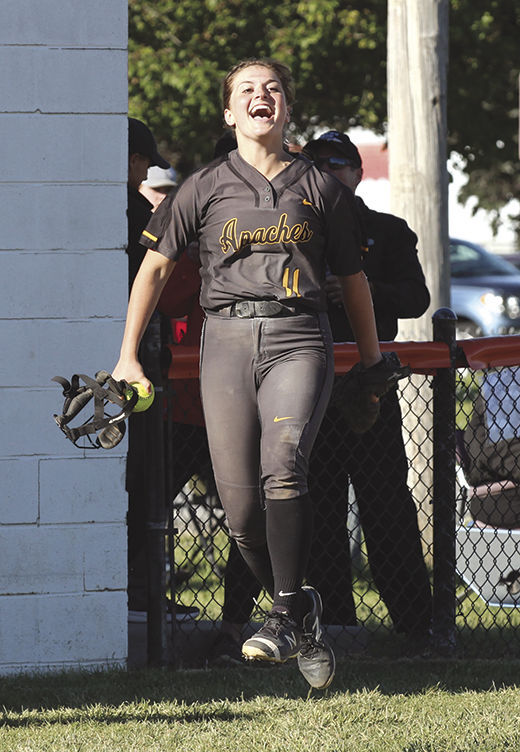 Fairview third baseman Kiersten Cline celebrates after catching a popup for the final out of the game during the Apaches’ Division III regional softball final against Cardington-Lincoln on Saturday at Elida Middle School. 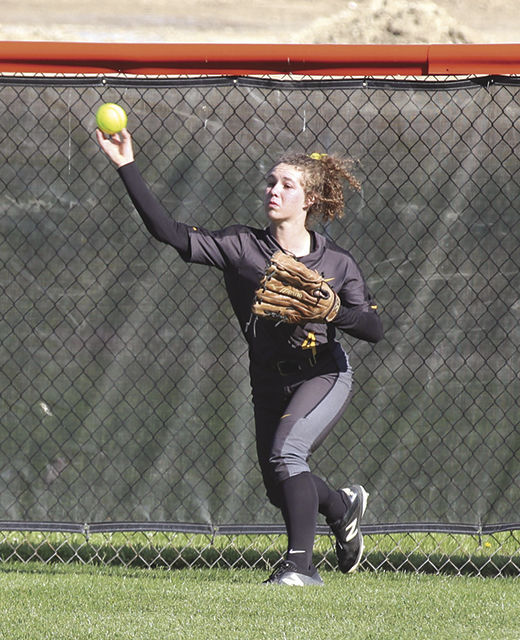 Members of Fairview’s softball team celebrate with the regional championship trophy after the Apaches beat Cardington-Lincoln in a Division III regional final on Saturday at Elida Middle School.

Fairview third baseman Kiersten Cline celebrates after catching a popup for the final out of the game during the Apaches’ Division III regional softball final against Cardington-Lincoln on Saturday at Elida Middle School.

ELIDA — Anna Ankney, Olivia Ricica and the rest of Fairview’s softball team powered their way into the school record books on Saturday.

For the first time in school history, Fairview earned a trip to the state tournament as the Apaches pummeled Cardington-Lincoln 11-1 in five innings in a Division III regional final at Elida Middle School.

“I feel like my heartbeat is somewhere in the stomach region,” Fairview coach Staci Renollet said. “Just so excited and proud of these girls and the best thing, like I just told them, we have another week together.

Fairview (No. 7 in final Ohio High School Fastpitch Softball Coaches Association poll) advanced to take on No. 2 Wheelersburg at 12:30 p.m. Friday at Firestone Stadium in Akron.

“It just feels amazing to have this opportunity to go to state,” Ankney said. “We worked really hard this whole season and this was our goal. Our goal was to win regionals and then here we are, just going on.”

Cardington-Lincoln (No. 3 in final poll), which reached the Division III state semifinals each of the last three seasons, finished 26-3.

The Apaches pounded 14 hits — Ankney and Ricica combined for half of them — and used a huge two-out scoring frenzy in the fifth inning to get the win.

Ankney played a huge role at the plate in going 3-for-4 with seven RBIs.

In the second inning, the Apaches’ senior roped an RBI single to score Allison Rhodes and give Fairview a 2-0 lead. Two innings later, Ankney hit a towering two-run home run to center field to score Alyssa Merritt and extend the lead to 4-0.

Her last hit was the most memorable.

With two outs and the bases loaded, Ankney crushed a grand slam down the left field line well past the fence to give the Apaches a 9-1 advantage.

“I still had that energy of hitting the other home run, so I just had that adrenaline,” Ankney said. “As soon as I saw that pitch coming, it’s my pitch and I just swung.”

Added Renollet: “I told her a couple of at-bats that I would be nervous if I were the opposing pitcher just because I wouldn’t want to be 43 feet away from Anna at any point. But then on this type of stage, the look in her eye today, I knew something big like that was going to happen from her.

“There was no doubt. Not just a four-year starter but being Anna Ankney, the softball (player) that she is. She’s played more softball, she’s dedicated, devoted her life more to softball than any player I’ve ever had in my decades of coaching. Every single bit of it that she’s getting is very much deserved and earned.”

Ricica, who had an RBI double in the first inning among her four hits, had an RBI single to score Cassie Mavis and extend the lead to 10-1. Emerald Rittenhouse-Starbuck’s hit brought home Kiersten Cline to make it 11-1.

Merritt, who finished with two hits, kept the inning alive earlier in the frame with a two-out, two-strike RBI single to left field to extend the lead to 5-1.

“We saw them the other day and they hit the ball well against Otsego,” Cardington-Lincoln coach Tod Brininger said. “A lot of it was our fault, not making plays that we should have made and we probably gave them seven, eight, nine more outs than they should have had.

“... But they’re a great hitting team. They’re going to be really hard to get out, they’re going to be really difficult to beat. We just didn’t hit the ball as well as we had all year. It was just one of those games offensively, defensively we weren’t clicking. But all the credit to them because they did hit the ball hard, made us make plays and we didn’t make the plays.”

Paige Ricica earned the win in the circle after allowing an earned run on five hits in five innings pitched. The sophomore had six strikeouts and no walks.

“She hides the ball well,” Brininger said. “All these kids said it’s not crazy fast, 54-55 (mph), but she hides it so well and they said it gets on you quicker than what they would expect at that speed.

“She does a really nice job of keeping you off balance. If she ever gets a changeup that works consistently, she’s going to be even more difficult to hit. But she was inside, outside. A couple calls didn’t go our way that looked a little close, especially one (in Merritt’s at-bat) right in that last inning where they scored all those runs. But she was a really good pitcher, we knew that.”

Pirates freshman Genevieve Longsdorf took the loss. She had three walks and one strikeout in five innings pitched.

Cardington-Lincoln’s Chelsey Miller had two hits, including an RBI single in the fourth inning to score Hailee Edgell and cut the Apaches’ lead to 4-1. The Pirates had runners on second and third with one out in the fourth, but Ricica forced a fielder’s choice as Ankney collected a ground ball, looked the runner back at third base and rifled a throw to first, and had a strikeout.