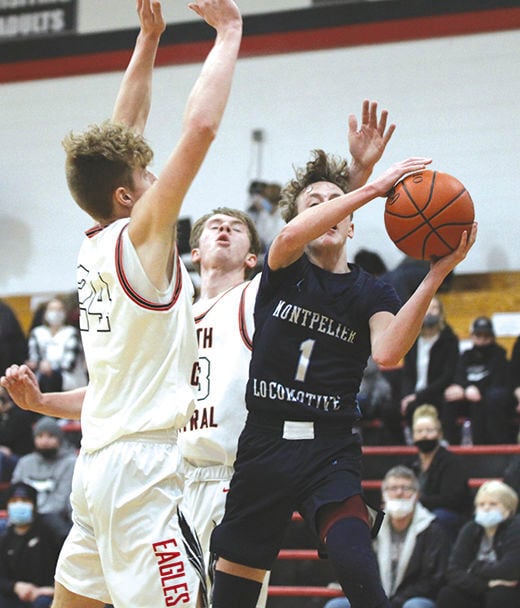 Montpelier’s Garrett Walz (right) drives and gets ready to put up a shot between North Central’s Ben Pettit (middle) and Zack Hayes during Saturday’s Buckeye Border Conference boys basketball game at North Central. Hayes blocks the shot on the play. 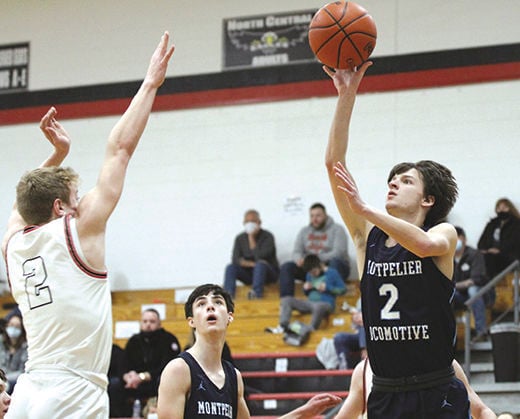 Montpelier’s Garrett Walz (right) drives and gets ready to put up a shot between North Central’s Ben Pettit (middle) and Zack Hayes during Saturday’s Buckeye Border Conference boys basketball game at North Central. Hayes blocks the shot on the play.

PIONEER — Zack Hayes and Ben Pettit did not start Saturday’s game for North Central. But the Eagles’ duo finished with a huge statement in a thrilling win.

Hayes tallied a 30-point, 14-rebound double-double, Pettit buried five 3-pointers and had 24 points with six boards, and the duo scored all 11 of North Central’s points in overtime as the Eagles outlasted Montpelier 72-68 in a Buckeye Border Conference boys basketball game at North Central High School.

“... Zack’s very capable of some big numbers with his athletic ability and his understanding of the game. He has a high motor and plays extremely hard, so I’m just going to say that I’m glad he’s on my team.”

Saturday’s game showed how anything can happen in the BBC. Montpelier, which knocked off league-leading Pettisville 49-46 on Friday night, dropped to 9-8 overall and 6-5 in conference play.

North Central, which had lost three straight games and seven of its previous eight, improved to 5-14 overall and 4-5 in the BBC.

“The bottom line is if you don’t come out and work in your BBC games, you’re not going to win. I felt like we got outworked a majority of the game tonight,” Montpelier coach Justin Houk said.

Hayes scored 11 of North Central’s first 12 points of the fourth quarter, including a pair of quick transition buckets and a 3-point play, as the Eagles used a 12-2 run to take a 53-43 lead with 3:49 left.

However, Montpelier slowly clawed its way back in the game.

The Locomotives forced eight of the Eagles’ 21 turnovers in the fourth quarter and went 11 of 12 from the free-throw line to pull within 61-59 with 45 seconds left. Tylor Yahraus was 5 of 6 from the line, Thomas Jay 4 of 4 and Garrett Walz 2 of 2.

Jay’s steal gave Montpelier the ball with around 30 seconds left. With the clock ticking down, Yahraus found Dylan Eitniear for two in the paint — Eitniear’s only points of the game — with nine seconds left to tie it at 61-61 and force overtime.

“Coach Houk does an awesome job with them over at Montpelier,” Fidler said, “and it’s always a battle when we play them, whether it’s here, whether it’s there.”

Montpelier committed three of its 11 turnovers in overtime.

“That final stretch, with I think there was about two minutes to go, we were up one and I wanted to burn that clock off, and we just didn’t handle the ball,” Houk said. “I think we turned it over two or three straight times and one was for a breakaway layup and then the momentum swung, and that was the name of the game.”

North Central shot 56 percent (9 of 16) from 3-point range, including a blistering 80 percent (8 of 10) in the first half. Pettit had three 3s in the second quarter in helping North Central turn a 17-12 first quarter deficit into a 33-27 halftime lead.

“We shouldn’t have dug ourselves a hole, but by golly, I don’t know what they shot but they shot well,” Houk said. “Hats off to them, they shot well but I don’t think we really played with a sense of urgency like we should have.”

The Eagles shot 49 percent (23 of 47) overall from the floor and 74 percent (17 of 23) from the free-throw line in putting up a season-high scoring output. Joey Burt hit two 3s and had eight points, while Landon Justice added seven points and five boards.