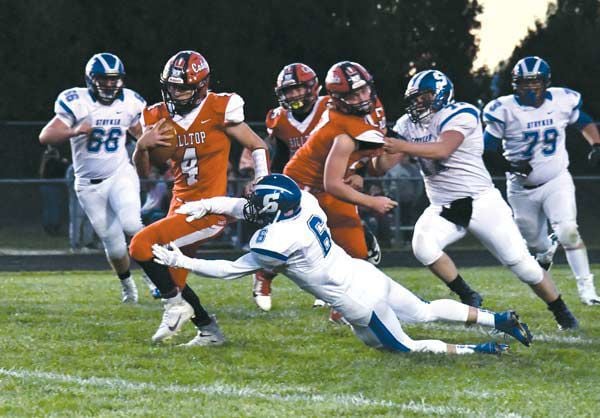 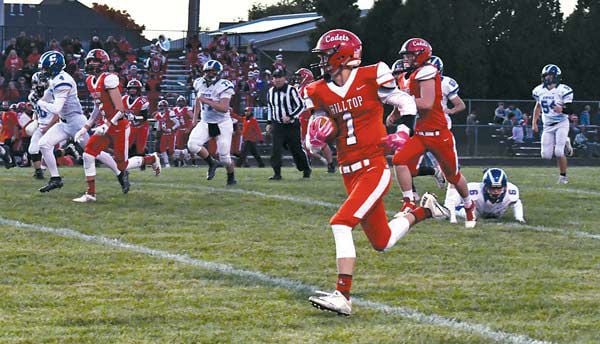 Hilltop scored on all five of its offensive drives in the first quarter, starting with the Cadets’ first play from scrimmage. On a trick play, Schlosser handed the ball to a running back, who flipped to junior wideout Griffin McEwen who had come around on a jet sweep. McEwen went untouched and the Cadets took an 8-0 lead on his 54-yard score.

On the Cadets’ second drive, senior running back Dan Shilling scored a 9-yard touchdown run, set up by a 28-yard completion from Schlosser to McEwen and a 35-yard carry from Hayden Brown.

After forcing the Panthers to turn the ball over on downs, Hilltop took over again at the Stryker 48-yard line. Two plays later, Schlosser found Andyn Haynes in the back-left corner of the end zone to give Hilltop a 22-0 advantage.

Schlosser and Brown connected on a streak down the right side of the field, and Brown broke a tackle at the goal line to secure a 58-yard touchdown and a 28-0 lead for Hilltop. Schlosser would throw two more touchdowns — strikes of 16 yards and 20 yards to McEwen.

The Panthers would score, though, just inside the second quarter with 11:55 left to play, as Payton Woolace found Kaleb Holsopple on a quick-hitter screen pass on the left side from four yards out to put the Panthers on the board.

Hilltop sophomore Alex Richmond would put the topper on a smooth victory for the Cadets with a 50-yard touchdown run with 3:16 left in the first half to secure the 47-6 win.

Schlosser completed 13 of his 14 pass attempts for 274 yards, four touchdowns and no interceptions. Three of those touchdowns found McEwen, who caught three balls for 64 yards and also racked up 68 rushing yards on two attempts. Brown led the Cadets in receiving with 159 yards on six receptions.

“Connor Schlosser has improved immensely over the weeks,” Hilltop coach Nate Massie said. “We were able to pass protect him very well, which is huge for us, and our receivers made some excellent catches.”

The Cadet defense was able to stifle Stryker’s passing attack, holding Woolace to 7-for-22 passing with 52 yards, a touchdown and an interception by Brown. Hilltop held Stryker to just 3.1 yards per play, compared to the Cadets’ 16.9, and outgained the Panthers 456-122. Stryker wasn’t able to convert any of its five fourth-down attempts.

“Defensively, we got after it,” Massie said. “We hit. That’s probably the best I’ve seen us run to the football. We challenged them this week to execute to perfection, and I think we did a great job executing our assignments and not making the mental errors that have killed us in previous games.”

Hilltop bumps its record up to 2-6, including 1-3 in the TAAC. The Cadets will play against Cardinal Stritch next Friday night, with the game taking place at Northwood High School. Stryker’s official record drops to 0-6, including 0-4 in the TAAC, and the Panthers will look to regroup and earn their first win of the season when they host Montpelier next Friday night.