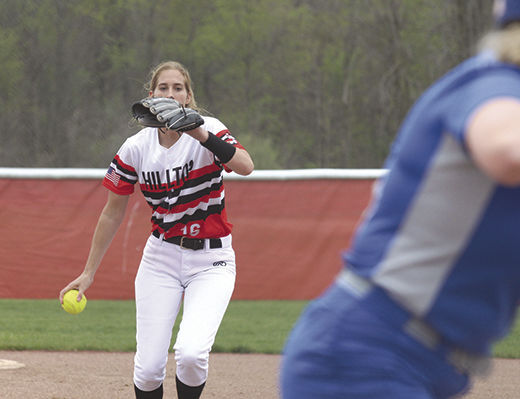 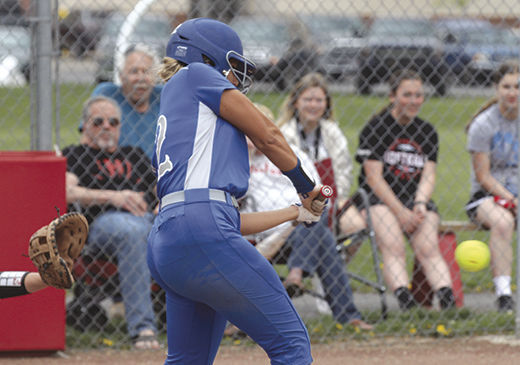 Edon’s Paige Briner swings and connects on a pitch during the Bombers’ Buckeye Border Conference softball game against Hilltop on Wednesday at Hilltop High School.

Edon’s Paige Briner swings and connects on a pitch during the Bombers’ Buckeye Border Conference softball game against Hilltop on Wednesday at Hilltop High School.

The Cadets, who have won the last seven BBC titles, moved one step closer to an eighth-straight crown in improving to 17-3 overall and 7-0 in league play. Hilltop maintained a three-game lead over Pettisville, Montpelier and North Central (all 4-3 in the BBC).

Hilltop jumped out to a 4-0 lead in the first inning, but Edon scored a run in the third and two in the top of the fourth to pull within 5-3. Hilltop responded with two runs in the bottom of the fourth, but Edon added one in the sixth to make it 7-4 Hilltop.

The Cadets broke through, however, with seven runs in the bottom of the sixth to pick up the win.

Holly Jermeay slapped five singles, while Leanna Baker tripled, singled and drove in three runs to lead the Cadets at the plate. Sara Barnum (double, single) also had two hits and three RBIs, while Ericka Dennison chipped in a double, single and RBI.

Kodi Brenner had a double and two RBIs for Hilltop.

Lana Baker picked up the win in the circle after allowing four runs (all earned) on six hits in six innings pitched. She had seven strikeouts and no walks.