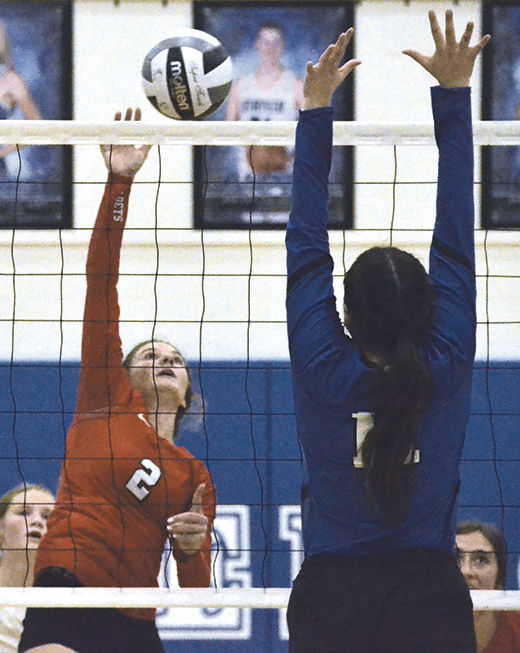 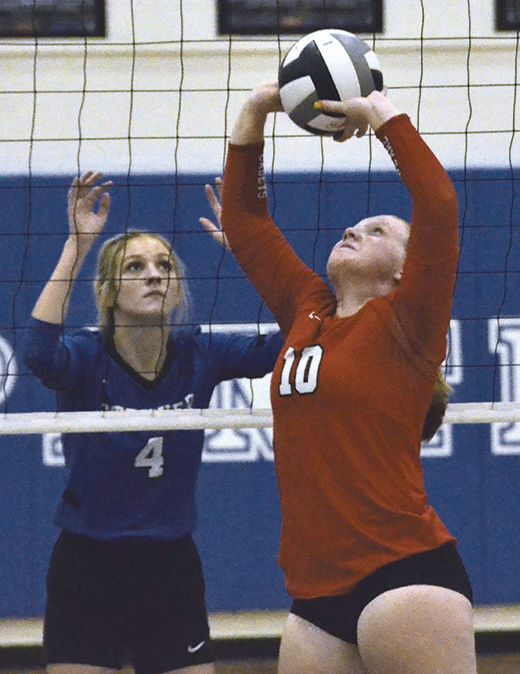 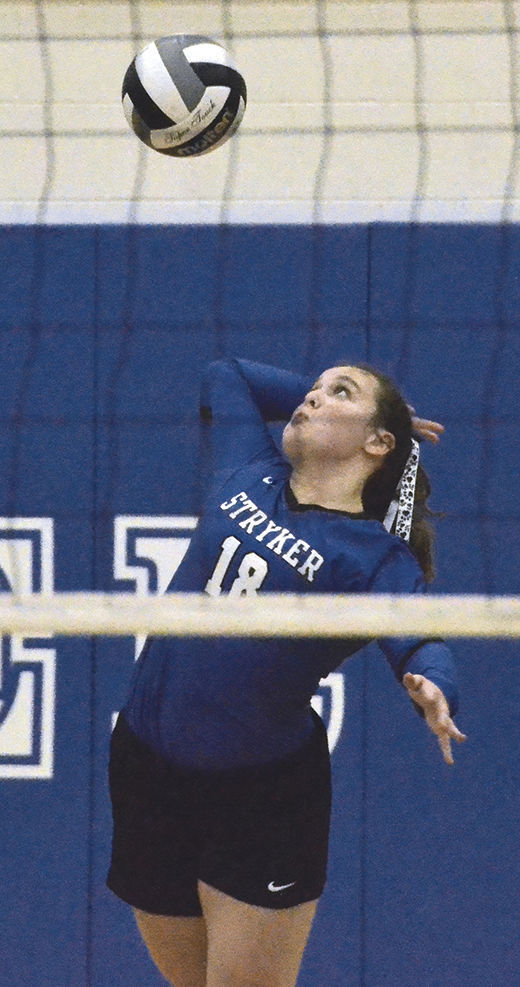 STRYKER — For the first time since 2004, Hilltop’s volleyball team has clinched at least a share of a league title.

The Cadets used stout first and third sets and swung momentum halfway through the second to sweep Stryker 25-14, 25-14, 25-12 in Tuesday’s Buckeye Border Conference match at Stryker High School to earn at least a share of the championship.

But Hilltop (16-5, 6-0 BBC) still has its eyes set on an outright title. North Central (17-4) is 5-1 in BBC play and second place in the conference, and is the only contender left vying for co-champion honors with the Cadets. Hilltop defeated North Central in four sets on Sept. 28.

“Our goal for this season — for me at least and I know a few other girls — was just at least beat North Central so we could have that step over them in the BBC,” said senior Kacy Connolly, who was 66-of-67 with 29 assists on Tuesday. “And now that we’re one game away from having it, we’re just pushing for it. We’re going to go for it.

“We’re going to give it everything we have and we’re just going to go for it.”

Long runs propelled Hilltop over the Panthers, who dropped to 7-14 overall and 2-4 in the BBC.

In the first set, Stryker cut Hilltop’s early 4-1 lead to 6-4 thanks to a Cadets hitting error, serving error and kill from Mallori Blevins.

But, a Jayma Bailey kill jolted a 16-5 run to give Hilltop a 22-9 lead. The Panthers had a 5-1 run with three kills from Haylee Fulk and a Kaitlyn Myers kill, but a Stryker lift and Ray Saunders ace sealed the first-set victory for Hilltop.

Stryker, however, carried that late first-set momentum into the second.

After the Cadets got off to a 7-4 lead, a Brianna Breier block and ace started a five-point run that gave the Panthers a 9-7 lead and forced a Hilltop timeout. Emma Fulk and Haylee Fulk also had one kill apiece in the run.

Coming out of the timeout, Stryker kept it going with a 4-2 run — with two points coming via Blevins aces — to take a 13-11 lead.

Hilltop, though, took over the rest of the set — and match. A Panthers hitting error and three Gabby Rodriguez kills started a 14-1 run to secure a 2-0 match lead. Rodriguez totaled seven kills in the rally.

“We gained some confidence for a little bit there,” Stryker coach Ally Moore said. “We got that momentum back, and then our mental game wasn’t as tough as we usually are tonight.

“We kind of got in our funk and just hoping to get out of that before tournament time.”

The Cadets got out to another 7-4 lead in the third set, and again Stryker fought back. The Panthers slimmed Hilltop’s lead to 8-7 via a block and kill from Emma Fulk and a Cadets’ spiking error.

But the Cadets took control for the remainder of the match, as Hilltop scored 11 unanswered points at the beginning of its 17-5 run to help it secure the conference victory.

“I think what happens a lot for us is we pass well, and Kacy can get the ball (anywhere). Like, we have a variety of things we can do with the ball. Not just Gabby, but Mia (Hancock) in the middle, Libbie (Baker) a couple times, Alex (Horton) to the right,” Hilltop coach Janice Bruner said. “When we pass well, we have a lot of options and variety that we can play with.”

Connolly is coming off back-to-back matches dishing out over 100 sets — 105 of 107 against Wauseon on Monday and 126 of 126 vs. Montpelier on Oct. 7 — and looks to use her consistent setting to be a key part of Hilltop’s postseason success.

The senior also reached her 1,000th career assist against Edon on Oct. 5, making her the second player in school history to reach that milestone.

“I try to keep as consistent as I can because if I have an off night, then that means hitters are going to have off nights, because they don’t have as good as sets. It means I’m letting my team down,” Connolly said about her recent stretch. “But to know that I’m efficient, knowing that I’m supporting, it’s amazing.”

“We still have that match at Holgate (Thursday) and we’re really focused on going undefeated in the league, and that’s been our goal since day one. It feels good,” Bruner said. “I thought we played well tonight. We were kind of disappointed in our loss at Wauseon, going five (sets) like that after winning the first two.

“I think this was a good recovery for us and the girls were super motivated.”