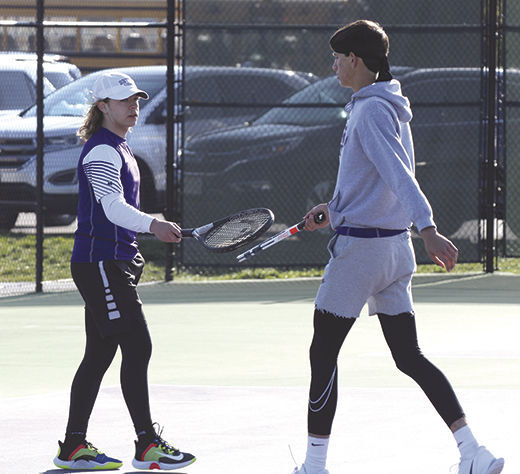 Bryan’s Aiden Andrews (left) and Craig Jackson react after a point in their No. 2 doubles match against Lima Shawnee on Thursday at Bryan High School. 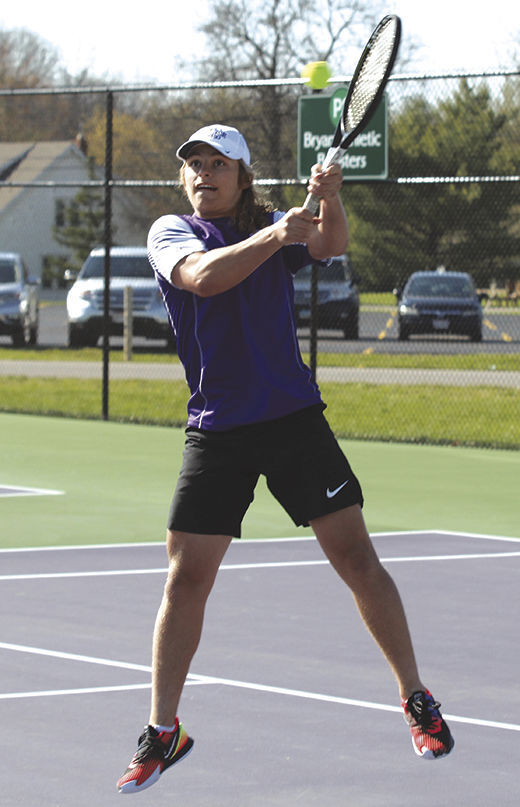 Bryan’s Aiden Andrews (left) and Craig Jackson react after a point in their No. 2 doubles match against Lima Shawnee on Thursday at Bryan High School.

Craig Jackson and Aiden Andrews had to dig pretty deep as their No. 2 doubles match on Thursday was approaching three hours.

The Bryan duo came through with a huge win.

Jackson and Andrews overcame a first-set loss via tiebreaker, finished strong in the second and won the third via tiebreaker 7-0 to give the Golden Bears’ boys tennis team a 3-2 victory over Lima Shawnee in a matchup of ranked teams at Bryan High School.

“It was huge,” Bryan coach Mitchell Owens said. “We were down 5-2 in the first set, then our guys came back and tied it, then we dropped it in a tiebreaker. So to win the third set in a tiebreaker is a lot of redemption right there.

“To go out and go 7-0 in the tiebreaker just showed that they wanted it bad.”

Bryan, ranked No. 7 in the latest Ohio Tennis Coaches Association poll for the Division II Northwest District, improved to 12-2 with the win over the sixth-ranked Indians.

The Golden Bears won both doubles matches, while junior standout Jay Fortner cruised to a victory at No. 1 singles.

With four of the five matches already decided, Jackson and Andrews had all eyes upon them for most of their match against Adam Stump and Seth Grieshop.

Jackson and Andrews dropped their first set 7-6 (7-5) and trailed 4-3 in the second set, but the Golden Bears’ duo won three straight points to post a 6-4 victory and tie the match at 1-1.

Stump and Grieshop jumped out to a 3-1 lead early in the third set, but Jackson and Andrews responded with four straight points to take a 5-3 lead.

The Indians’ duo, though, scored the next two points to tie it at 5-5. Andrews’ forehand smash at the net gave the Bryan duo a 6-5 lead, but Shawnee tied it back up at 6-6.

In the tiebreaker, it was all Bryan.

Jackson’s big hit at the net gave the Golden Bears a 1-0 lead, and after a pair of Shawnee hitting errors, Jackson’s solid hit from the back line extended their lead to 4-0. Andrews’ hit led to a Shawnee error, and after another Indians’ miscue, Jackson slammed a forehand hit at the net to give Bryan the win.

“Whenever I see the ball get lobbed up, I get so excited,” said Jackson, a 6-foot-4 junior. “It’s almost a bad thing, but I remember my freshman year watching (2020 Bryan graduate) Case Hartman play, he always hit it as hard as he could and I remember thinking ‘Oh, I want to do that.’

“He almost inspired me; just every time I see it up and just getting (good) net play, it’s huge. It’s a big moral booster and everything. I feel like it’s a big part of the game.”

Jackson and Andrews improved their season record together at No. 2 doubles to 2-1.

At No. 1 doubles, Bryan’s Carter Brown and Nathan Hess improved their record to 3-0 with a 6-3, 6-3 victory over Brayden Ward and Niel Ok.

“This is a big win, this is huge,” Owens said. “We lost to (third-ranked Ottawa-Glandorf) in a tight one (3-2 loss on April 15) and to pull this out shows that we have the mental toughness.”

The Golden Bears will be back in action Monday with a home doubleheader. Bryan will take on Ayersville at 4 p.m. and Rossford at 5:30 p.m.